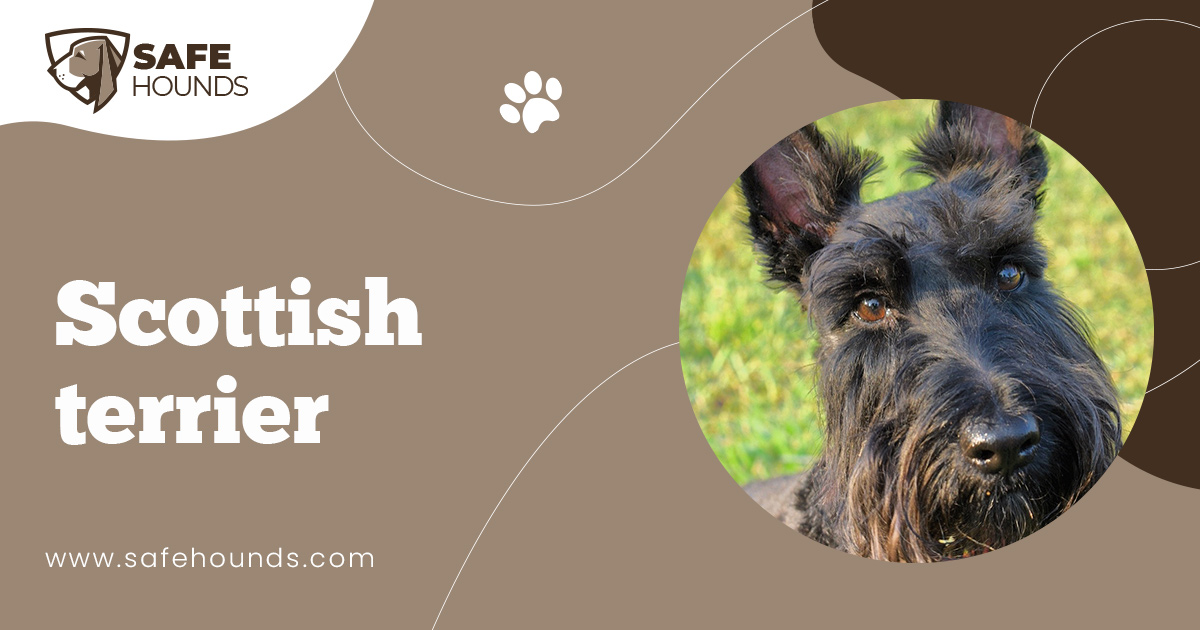 This tiny little compact dog has short little legs, but can move quickly. The way they are groomed make them look shorter than they really are. Their coat is coarse and feels like bristles, but their undercoat is soft. This coat protects them from the bad weather they have endured over time. They come in three colors of coat, black, wheaten, and brindle of any color.

The sharp pricked ears of the Scottish Terrier give them a distinct characteristic look that many people adore. Their noses are quite large for their size and so are their teeth. Their little eyes are dark and shaped somewhat like almonds. They have a very muscular neck. They carry their tails straight or curved, which is of medium length.

They are quick bundles of joy. They are very energetic and love to play with you or his toys. They do not need much exercise and a small fenced in yard will do. They do not like being alone and want all your attention when you are home.

They are similar in looks to the Cairns and Westies except the Scotties have a longer head and body and darker than the Westies and have a different personality. They are sensitive to your feelings and they love to bark.

These little guys can handle more than you think. They are tough for their size. The Scottish Terrier has a very muscular little body, neck, and appears to have a barrel-shaped chest. They have short little legs that are close to the ground. They have large paws that they love using to dig. If they are in a fenced in area and want out they will burrow their way right out of the pen.

Their height is usually around 10 inches and weight about 19 to 22 pounds while the female is about 18 to 21 pounds. The females are slightly smaller in height but not by much. They will hold their own against the males as well. Their coats are mainly black, but also come in wheaten and brindle of several colors. They are not to be confused with the Soft coated Wheaten Terrier or the West Highland White Terrier though and many people have compared them to those breeds.

Their little dark almond shaped eyes are full of playful intelligence. They show a lot of emotion in their eyes. You can tell if they are upset or excited just from looking into their eyes. This helps when you are playing, so you know when they tire. When they are tired you will notice a heavy look to their eyes.

You want to make sure you get a Scottie that is as close to a standard as possible if you plan to be in shows with them. You want to ensure that you do not lose points for having faults that are not accepted. The closer to being a perfect Scottie the closer to a championship you will be. If they do have faults then they will still make a great house pet but not for breeding or dog shows.

Like any other terrier the Scottie is quick and feisty. They are very independent and playful. They have been nicknamed the Diehard because of their hi-rugged nature and endless determination to do whatever he feels like on his own.

Their owners have said their Scottish Terriers are very loyal to the family. You must use a firm hand right from the start so they know you are in charge of them and not the other way around. They are also very sensitive. One Scottish owner said when she experienced a great loss her dog would not leave her side and licked her tears away. These little dogs will be there for you through thick and thin. They seem to cry when you do.

They are a good watchdog and only bark when need they to let you know something is going on around the home. They do not have the continuous bark like a beagle or other breeds. They are reserved with strangers when they come to their door. Then they will watch them until they are comfortable around them.

They are a fearless breed of dog and will hold their ground around other dogs. They may become aggressive if you have other dogs as pets and it is wise to get them used to each other at an early age.

The Scotties do not need much room to run around. Take them on a little walk and they will be happy. They usually exercise themselves with their toys or you.

The Scotties live to be around 12 to 15 years of age. Take care of them and they may live longer. Depending on the diet and living conditions your dog will lead a very happy life being part of the family

You need to brush your Scottie regularly when he is shedding, which is very little. You should take him in several times a year to have him professionally groomed. You want to keep his hair long on the body and shorter on the face and then brush it forward.

Remember, he is a digger. If you leave him in the yard without much supervision, he will dig under the fence and be off and running.

Many say the Scottie is the oldest of the Highland Terriers, but it has not been proven for sure. The first findings written about the Scotties were in 1436 when Don Leslie described them in his book, The History of Scotland 1436-1561. Then almost 200 years later a picture was painted by Sir Joshua Reynolds of a young girl caressing a dog that looked similar to a Scottie.

They were grouped at one time under the name Skye Terrier. However, all this did was confuse breeders. It is for sure that the Scottie and the West Highland White Terrier are related. They originated from Perthshire.

They were bred to hunt and kill vermin on the farms and then they were taken to the woods to hunt badgers and fox. Being diggers they would go right in after their prey and the owners had to pull them out of the holes by their tails. This is why they were bred with strong tails.

From 1800 on many writers agree that there were mainly two varieties of the terrier existing in Britain at the time, the rough haired Scotch Terrier and a smooth haired English Terrier. Even though the identification was still being sought after through the late 1800s the Scottish terrier had many different names: The Highland, the Cairn, Diehard, and most popular was Aberdeen Terrier.

The Scotties first came to America in the early 1890s but they did not become popular until after World War 1 and 2. The first club was formed in 1900 and a standard written for them in 1925. The United Kennel Club recognized them in 1934.

They became the most popular breed by 1936 and this continued on for several years but then died down some. They are still a popular breed wanted by many. There are thousands of happy Scottie owners around the world today that love having a wonderful devoted family dog.