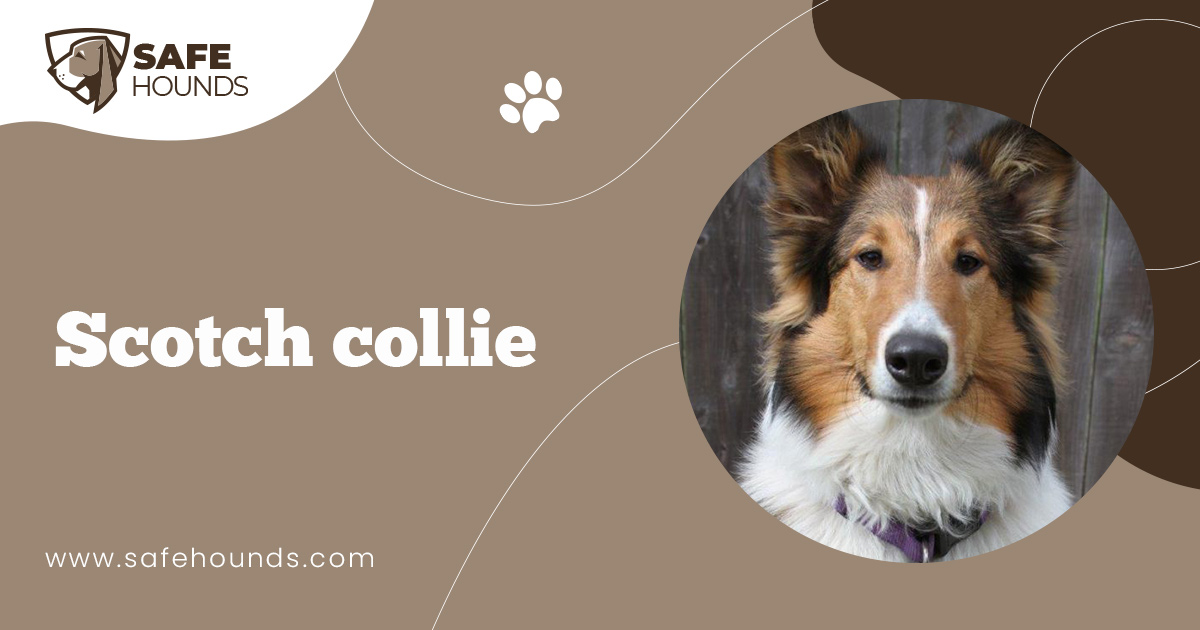 The legendary Lassie is the perfect dog. Short of reading and writing, this dog can do just about anything. Lassie is the faithful and obedient pet, the gentle and lively playmate and baby sitter of the young ones in the family, the intelligent watch dog noted for its unerring ability to tell a friend from a foe and the tireless all around farm helper. Lassie is a Scotch Collie. Although depicted in the movie as a dog with a rather unrealistic character, in real life, a Scotch Collies attributes are not too far behind.

This North American herding dog has originated from the Scottish Highlands. The Scotch Collie comes in two identical varieties except for the type of coat. This herding dog can be rough and smooth coated. The Smooth Collie has a short dense coat that lies flat to the body. A Rough Collie has a well fitting longer coat that is harsh in texture. A Scotch Collie is a beautiful breed. This breed has humble beginnings. For centuries, these dogs have been the able herding helpers of shepherds in Scotland. After capturing the interest of Queen Victoria in the 1860s, the breed was developed in England until it has achieved its modern form in the late 1800s. A Scotch Collie is already a beautiful breed but it underwent a major makeover process. After the improvement, an elegant breed surfaced a dog that has become the star of dog shows. However, the innate working ability and the ideal characteristics of the breed remained unchanged.

This is a versatile breed. The dog is noted for its high level of intelligence and for its high desire to please. Easy to train, the dog has excelled in obedience and agility competitions. A Scotch Collie is generally a healthy breed. Well cared for and with proper nutrition, this breed can live between 12 and 14 years although some individuals have lived up to 16 years. This famous breed has a large following. With a litter size of 6 to 10 puppies, this breed is not hard to come by. Of course, a prospective Scotch Collie owner has to choose a reputable breeder.

With the popularity of the Lassie the movie and the TV series that has run for 17 years, not many people would be unaware how a Scotch Collie looks. A Scotch Collie is a medium sized breed with males measuring from 21 to 24 inches and weighs from 45 to 70 pounds. Females weigh between 40 and 60 pounds and measures from 19 to 22 inches at the withers. This breed has a rather rectangular shape as the body is longer than its height. This breed has a long wedge shaped head with a flat skull and a slight stop. The medium sized semi erect ears are fairly wide set. Almond shaped medium sized eyes are generally dark brown in color although blue merle coated dogs have blue flecked or solid blue eyes. A Scotch Collie has a straight back, and a deep chest with well sprung ribs. The long tail of this dog is usually carried low.

As mentioned this breed comes in two varieties – the Rough Collie and the Smooth Collie. Conformation is identical for these two varieties except for the coat type. Because of Lassies popularity a Scotch Collie is commonly associated with a sable coat color. Sable coated dogs have a light golden tan to a rich mahogany coloring. Other coat colors would be black, white and tan (tricolored) and blue merle. Blue merle collies have white and mottled blue-gray coats. White collies are also seen. These dogs would have a predominantly white body and a combination of the other colorings on the head.

This breed from the Scottish Highlands is not only a very beautiful breed but also a very useful one. This is a people oriented dog very friendly, loyal and devoted to its family. This breed was originally used as a herding dog. Scotch Collies have hunted as well but it is one of the ideal choices for a family pet. The dogs intelligence and innate willingness to please makes housebreaking and obedience training easy. A Scotch Collie is not a one man dog as it loves the entire family although the dog tends to favor the children because of its lively and playful personality. The dog is very protective of its small masters. This dog tolerates other dogs as well as other smaller non-canine pets. Herding dogs have the penchant to bark. This dog makes a good watchdog as it will sound the alarm at the sight of strangers but dont depend on the dog to attack intruders as aggressiveness is not its nature. A Scotch Collie would always want to be with its family. It would never be a good idea to keep the dog chained outdoors. This dog can be clingy and can even be destructive. A Scotch Collie will be a very destructive if allowed to get bored. Obedience training is necessary as this dog has the tendency to assume the leader of the pack role if allowed by a doting master. A Scotch Collie that sees the weakness of its master will be stubborn and manipulative. The dog can live in apartments as long as they are given plenty of opportunities to exercise. A Scotch Collie makes a wonderful jogging companion or a Frisbee playmate on the beach.

The Scotch Collie is a clean breed. This dog does not have the doggie smell common in other breeds. The smooth coated collie will have minimal grooming requirements. Brushing the coat every two weeks would be sufficient to maintain its good condition. Grooming for the rough coated collies would depend on the amount of the coat. The rough coat would be prone to mats thus more frequent grooming would be necessary especially when the dog has a full coat. In summer grooming every two weeks would be sufficient for both varieties. Teeth brushing and ear cleaning must be done weekly. Nails of the dog must be regularly trimmed as well.

Farm and herding dogs common in North America during the early 19th century were known under the umbrella name collie although there are four specific dog breeds with the word collie attached to their names. These are the Bearded Collie, the Border Collie and the Rough and Smooth Collies. This magnificent breed was widely utilized in United States during the 1800s as apart from being and excellent herding dog, this breed hunts and makes an outstanding family companion as well. The Scotch Collie during this time was divided into two types – the Rough Collie and the Smooth Collie. Measuring around 14 inches at the withers, the dogs then are much smaller than todays dogs.

This breeds ancestry has spanned centuries. However, the exact origin of this North American landrace is unknown although it was established that the Scottish Highlands was the natural and original habitat of the Scotch Collie. Ancestors of this breed were the sheep and cattle herding dogs of Scotland and northern England. The word collie is believed to have originated from an Old English word for black or coal. Queen Victorias visit to the Scottish Highlands in the 1860s has generated tremendous interest for the breed more so when the queens love for the breed became a public knowledge. Owning these dogs became fashionable. For thousands of years, these working dogs have herded cattle in North America but it was in England that the breed has gained immense popularity. In North America, Scotch Collies were primarily considered as farm denizens. These dogs were in fact called Farm Collie or Old Farm Collie. In England, these dogs were glamorized. The Scotch Collie was valued by the English not as a working dog but as a pet that bring home rosettes and medals from dog shows. As early as 1860s, the breed has been gaining recognition in dog shows in England. The Scotch Collie has entered American soil in 1880. By 1886, the Scotch Collie is already an established breed in North America. On the same year the Collie Club of America was established. The American Kennel Club has the Scotch Collies as one of its founder breeds.

Agriculture in North America has rapidly changed after World War 11. During the early 20th century, the English Shepherd and the Australian Shepherd was developed form the farm collies of North America causing breed enthusiasts to be apprehensive about the future of the breed. True enough by 1940s, the Scotch Collie has started to disappear.

A Scotch Collie is a looker. This breed was exalted as an ideal dog through the movie Lassie Come Home released in the 1950s. The waning interest for the breed was revived not only in United States but also in United Kingdom and in other countries when Lassie was made into a television series in 1954.