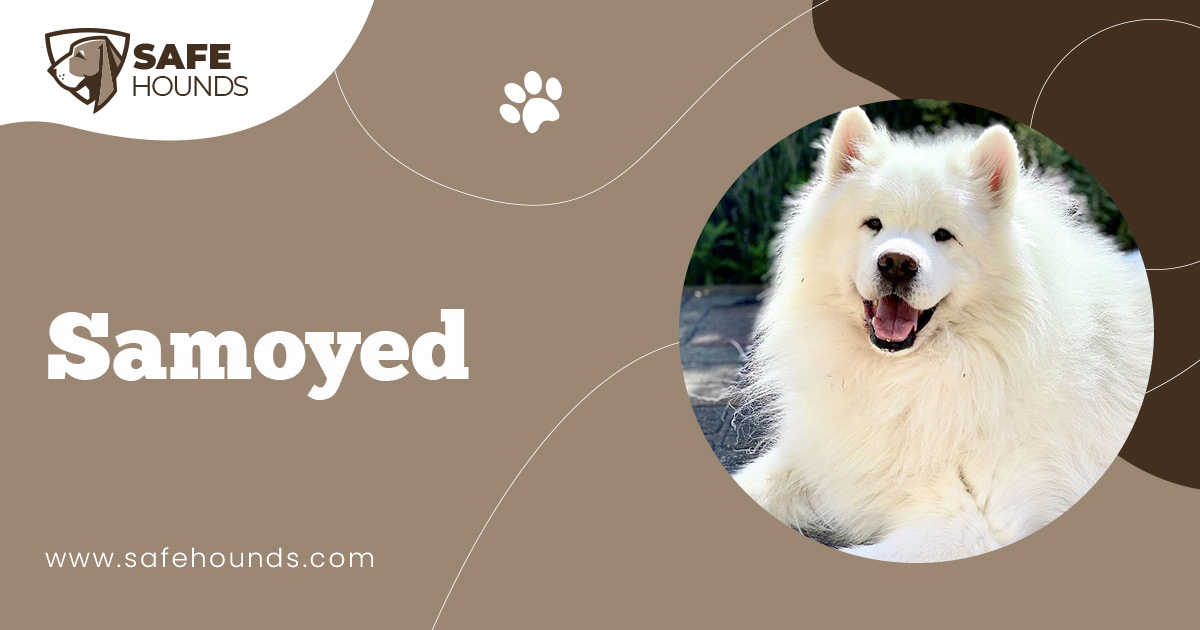 The Samoyed has been around for thousands of years. Their history shows that they were working class dogs for pulling sleds. Some have been known for fishing but pulling sleds is what made them popular.

The Samoyed is a loving dog that loves everyone. They love people so much that even strangers do not have to worry about them. They will bark and let you know if someone is around, but after that, they are friendly as ever to them. Samoyeds are also great with children and other household pets. These dogs have been known to attach to one person in the family, however, they will love everyone else as well. Samoyeds are wonderful dogs and they know how to love everyone. They are very playful and just taking them out jogging, walking, or playing around in the house with their favorite toy keeps them happy.

Samoyeds are also pretty easy dogs to take care for as well. Simple brushing is good enough for this dog. The cool part with Samoyeds is that their white fluffy coat stays really clean without a bath. Therefore, the grooming care is pretty simple along with a few other things they might need.

If you are thinking about getting the family, a Samoyed dog then you are thinking smart. Just make sure you do not live where it is really hot. These dogs are used to cold artic weather so really extreme heat is not for these dogs at all. If you live where it does become very hot, they will need to be indoors during the warm months. Otherwise, a Samoyed dog is great for any family.

When looking at the Samoyed you will see by its compact muscular body that it has strength like no other. The Samoyeds coat is thick and is silver tipped. The coat color comes in white, biscuit, yellow, and cream. Pure white is preferred with this breed. The Samoyeds coat is thick but not wavy. They have a thick and soft undercoat. This helps protect them from the wind and cold in the artic. Their fur covers almost every inch of their body. They even have hair between their toes and also in their ears. They look like they have a mane around their neck with their hair all bushy around their neck such as you might see with a lion.

Their nose is either black or brown. They have eyes that are dark, deep, and almond shaped. Their eyes are set far apart. Their ears are erect, medium sized, and they are kind of round at the tips. Their tail is bushy and curled up on their back. Their legs are strong and their feet are flat. Their mouth has somewhat of an upward curve to them that makes them look like their smiling. This is what they call the famous Samoyed Smile.

The Samoyed is a peaceful, dignified, and gentle dog. They tend to favor one person in the family, but will still have love for everyone. Samoyed are friendly to everyone even intruders. They will alert you if someone comes around, but then will be friendly like no other dog. Since the Samoyed is so friendly they do not make a good watch dog. They adapt well to family life and love kids of all ages. They are very smart dogs and can be trained well. Make sure to start training at an early age and make sure to do patient training with them. When a Samoyed becomes attached to its master, they tend to prove themselves against any enemy and prove to be outstanding. Make sure not to leave your Samoyed alone for several hours at a time as to the fact they are chewers and may be destructible. The Samoyed tends to bark a lot.

The Samoyed will do all right with living in an apartment as long as they get all the exercise they can. They are active indoors and can do pretty well with a small yard. Since the Samoyed has such a thick coat and is used to the artic cold these dogs do not do well in hot weather.

The Samoyed needs lots of grooming. Since they have such a fluffy coat, they need to be brushed very frequently to avoid mats and knots. Their coat tends to stay white without even giving them a bath. Make sure when your Samoyed is shedding to brush them even more to get out the loose hair.

Samoyeds need an excessive amount of exercise. Make sure not to over exercise them in warm weather. So, make sure to watch how warm it is when you take them out running around. To exercise this breed a simple walk, jog, or playing tug a war with them with their toy will do fine and keep them smiling.

It has been said that the Samoyed dog breed has been being bred for at least 3,000 years or more. The Samoyed dogs have been used for sled pulling in the artic cold. In 1889, an explorer by the name of Robert Scott brought several of the Samoyed dogs to England where the Samoyed breed was developed, then bred and was spread around the world for everyone to enjoy.

A sled dog team by Roald Amundsen was led by a Samoyed dog by the name of Etah. This was the first expedition to the South Pole.

It has been said that the Samoyed is among the fourteen ancient breed of dogs in the world. The other includes the Siberian huskies, Alaskan Malamutes, the Chow Chow and 10 other dog breeds as well as the ones listed above.

Fridtjof Nansen had a plan when he used his sled dogs. The plan was to feed the weak and the dead dogs to his stronger dogs. Well, his plan went downhill because at the end he had lost almost all his dogs because of this plan. This was his plan for exploring the North Pole.

The Samoyed name had become out of date for the Nenets people following the Russian Revolution. Thankfully, by then there were explorers that had brought back enough Samoyed to keep the breed going. They had brought the dogs back to England where they were bred and then the United States started seeing this breed.