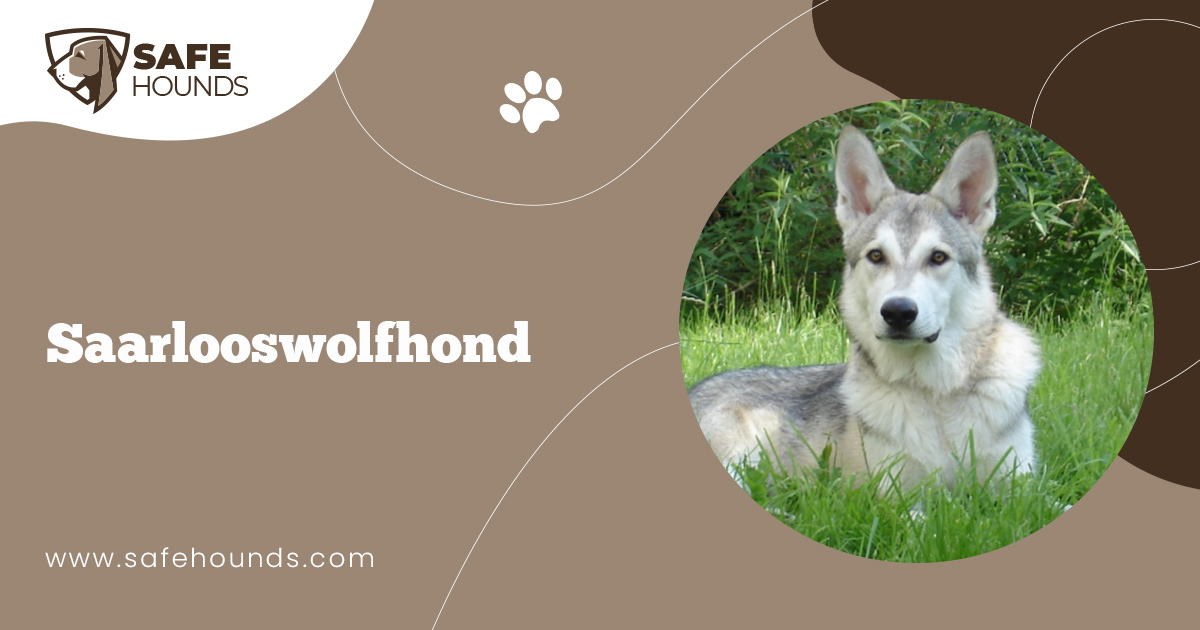 The Saarlooswolfhond has the body build, the coat and the movement of a wolf. It is not surprising for this breed to appear like a wolf as this dog that was created by a Dutch geneticist is actually a dog wolf hybrid. A German Shepherd Dog and an Iberian wolf bitch are the ancestors of this breed that originated from two countries – from the Netherlands and from Germany. The Saarloos Wolf Dog is a giant among dogs as it weighs up to 90 lbs and measures up to 29.5 inches at the withers. The breeding goal is to create a dog that will be immuned from distemper and from other canine diseases. The dog should also be highly trainable. The breed was formerly named Europese Wolfhound. The name was changed to Saarlooswolfhond to honor Leendert Saarloos, the father and the developer of this breed.

The Sarlooswolfhound has an impressive appearance. The dogs size and strength should be intimidating enough for the dog to be a suitable guard dog. However, it does have a wolf-like attitude. The shyness and the stubborn nature make training quite impossible. These bold and daring dogs do not qualify as working dog. These dogs should adapt to training well as they are highly intelligent. Some were actually trained. For a while they were used as seeing-eye guides for blind people. However, because of the wolf origin, these dogs have the innate shyness of wild animals. A Salooswolfhond is definitely not a suitable seeing-eye in a street with heavy traffic. This is the reason why the dog did not qualify as a police dog. A shot would make the pack panic and go into stampede.

These strong willed dogs are pack oriented. Nothing would be more important to a Saarlooswolfhond that its pack. This dog is only for dog experienced people who have a fondness for dogs with ancient canine ways. In recent years, these dogs were found in homes. With extraordinary patience, positive motivation and lots of hard work, these dogs would let themselves be raised by a dog experienced person that will be considered as the leader of the pack.

The Saarlooswolfhond has wedge shaped head, a broad skull and a rectangular muzzle that is very similar to that of a wolfs. This breed has a straight nasal bridge and a broad nose whose color corresponds to the color of the coat. The German Shepherd-like ears are triangular, with rounded tip and well covered with hair. Set on top of the head, the extremely mobile ears expresses the emotion of the dog. Medium sized eyes are almond shaped. The yellow colored eyes with its alert, attentive but reserved expression is reminiscent of a wolf.

This breed has an impressive appearance. At a relaxed trot, the head and the beautifully ruffed well muscled neck form an almost horizontal line. Measured at the withers, the dogs body is slightly longer than its height. The rectangular body has a straight strong back, muscular and powerful loins, a moderately broad chest that almost reach the level of the elbows. This breed has a lightly tucked up belly. The broad tail that is profusely covered with hair is low set. The tail usually forms a slight curve and carried in sabre fashion. An excited Saarlooswolfhond carries its tail slightly higher.

The short dense coat protects the dog from any type of weather. This breed has a different garb for winter and for summer. In winter the undercoat and the top coat forms a profuse coat that covers the entire body. The hair on the neck forms an eye catching ruff. In summer time the top coat predominates. It is necessary for both seasonal coats to amply cover the belly, the inner side of the thighs and the scrotum. The usual coat color is wolf gray, wolf brown or agouti. Dogs may also have white markings.

Extremely light footed, the Saarlooswolfhond has an untiring trot that effortlessly covers great distances. This natural movement is reminiscent of a wolf and so is the shyness that makes this breed panic when confronted with unfamiliar people and situations. The Saarloos Wolf Dog is a beautiful breed but dog ownership must not be based solely on the appearance of the dog. This breed would need a dominant owner who will be the leader of the pack and who will undertake the introduction of the dog to other members of the family as well as to other household pets. This is not a violent breed but unless the dog is well trained and socialized, it is not recommended to be a companion and playmate of children. The dog has retained the pack instinct of its wolf ancestors and nothing would be more important for the dog that its pack. This breed tolerates other dogs. It was noted that owners specifically get another dog to constitute that oack.

This breed seldom barks but it would not do well in an apartment as it will require acreage to satisfy it high exercise requirements. Moreover, the dog will be distressed if kept in a cage or in a crate. With the thick dense coat, the dog can weather intensely cold climate. This dog would appreciate the chance to run freely.

The weather resistant coat of this breed would need regular grooming. Regular brushing and combing will remove loose hair and maintain the coats good condition. This breed need not be bathed very often as it bathing will remove the natural oils that weather proofs the coat.

The Saarlooswolfhond is a breed that was developed in the first half of the 20th century. In 1921, Leendert Sarloos, a genetics students and a nature and dog lover has started a lifelong study of improving the German Shepherd Dog. Saarlos is a GSD enthusiast and the objective of the experiment is to produce a better German Shepherd Dog, one with better trainability and one that will be immune to distemper. He believed that domesticated dogs have degenerated and that the dogs natural ability to fight diseases was softened. Saarlos believed that aside from the sharp senses that make a wolf escape danger, it also has the capability to stand against debilitating diseases that prove fatal to domesticated breeds.

In 1930, Saarloos joined efforts with a Dutch zoo to breed a dog with improved working ability and most importantly one that is hardy to fight distemper. Fleur, a European wolf from a Blijdorp zoological garden in Rotterdam was selected to be crossed with Gerard van Fransenum, a German shepherd Dog of Prussian descent. Gerards ancestors were noted for their courage and good trainability as the dogs were utilized in the 1st World War. Fleur has descended from a Siberian wolf. Saarloos called all the bitches Fleur. Unfortunately, the first Fleur succumbed to distemper before the dog was crossed with the GSD proving the theory that distemper does not affect wolves wrong. Another bitch was provided by the zoo and in the spring of 1936 the first litter came. However, all the puppies died of the dreaded dog plague. Succeeding breeding has encountered setbacks, but this Dutch breeder persisted and even consulted Professor Hagendorn, another Dutch geneticist. Through continued selected and diligent breeding, a dog breed was developed in Saarloos van de Kilstroom kennel and was given the name Europese Wolfhond. Saarloos have faith in the breed he had created and initiated the training of these dogs to be dog guides for the blind in a seeing-eye guide school in Dordrecht. It was noted that these dogs took less time to train. Several attempts were also made to gain recognition for this breed. However, the propositions were rejected mainly because it was thought that the breed is not suited as a working dog and also because of the lobbying made by German Shepherd Dog breeders who fear that the new breed would overshadow the popularity of the GSD.

Sarloos died in 1969 never realizing his dream of creating a recognized breed. The years following the death of this Dutch breeder proved to be hard times for the dogs. Dog enthusiasts fearing that the Europese Wolfhond will be lost to the world of dog lovers have asked for the support of the Raad van Beheer to have Saarloos dogs recognized. Finally, the breed attained recognition from the Dutch Kennel Club in 1975. As an honor to the creator of the breed, the name was changed to Saarlooswolfhond. The Saarlooswolfhound gained international recognition when it was officially recognized by FCI in 1981. This breed though is still considered to be extremely rare. Seldom seen outside it country of origin, this breed is hard to come and a puppy can cost up to $2000.