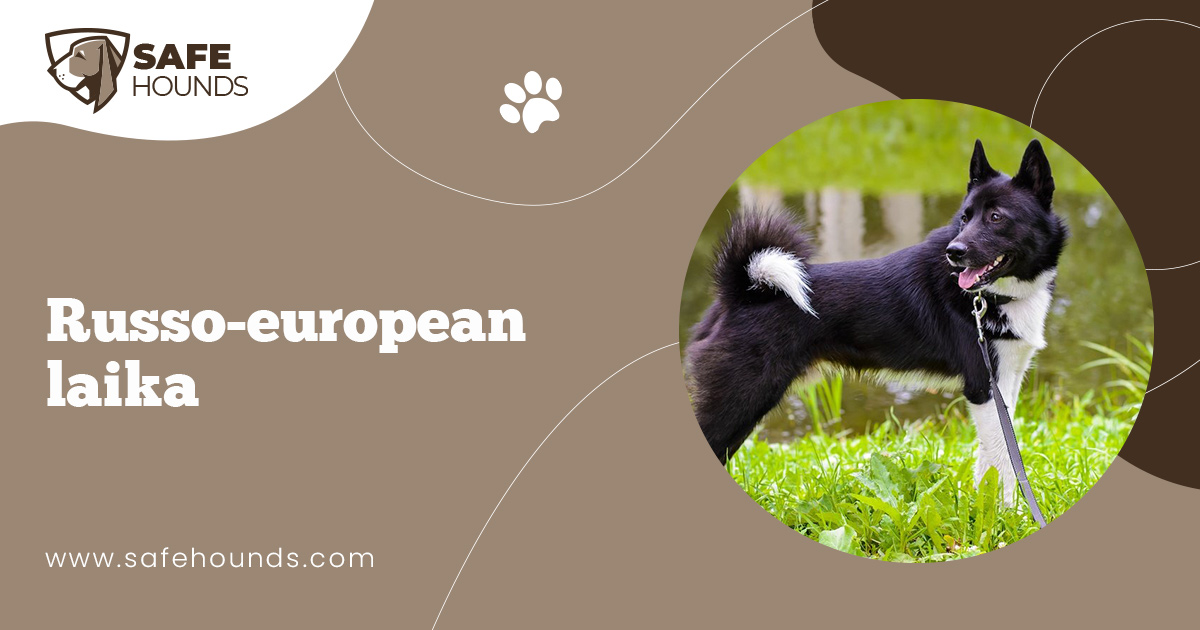 Laika is a Russian word that means barker. It is also a word that is used to refer not only to hunting dogs but also to breeds of sled dogs. In Russia, Laika is a common name for a dog. This dog gained worldwide acclaim when it became the earths first ambassador to space when it orbited the earth on November 2, 1957 aboard the Sputnik 11. FCI uses the word Laika on three breeds of dogs – the West Siberian Laika, the East Siberian Laika and the Russo-European Laika.

The Russo-European Laika is a one of the several breeds of dogs that were developed from the very ancient spitz type Landrace Laika dogs. These medium sized dogs with lean but compact bodies and impressive white, black or grey coats are most commonly seen in the taiga zone in northeastern Europe. A male measure from 21 to 23 inches at the shoulders and a females height is from 19 to 22 inches. These dogs were originally developed to hunts all kind of game. This bred has a very strong hunting reflex. At eight to ten months a puppy would start to work independently and start hunting squirrels, grouses and marten. These dogs mature fast. At ten months a Laika is already fully grown. A bitch would come in heat twice a year. Laikas are good mothers, well able to take care of a litter that may consist of five to nine puppies even without the assistance of a veterinarian or the owner.

A REL is primarily a hunting dog but it makes a very good family pet as well. These dogs are loyal to their owners. A Laika that is transferred to a new home at the age of 8 months will never forget its former master and if possible would return to its former home at the first opportunity it can get. Having a Laika in the home is just like having a security guard that is on a 24 hour duty. Although the dog is not vicious, the family will be alerted to the presence of intruders as these breed is a barker. The REL is a courageous breed. These dogs are now utilized to repel bears from public places.

The Russo-European Laika is a medium sized spitz type dog with a compact and strong body that is slightly rectangular in shape. The bone structure is well developed but it does not give the dog a massive appearance. The head is quite small, the skull takes the shape of an equilateral triangle. Dry muzzle tapers to a black nose. Evenly spaced white teeth meet in a scissor bite. Slanting small oval shaped eyes are dark colored. Set on high pointed tipped ears are pricked and very mobile. The neck that is of the same length as the head is dry and muscular. A Russo-European Laika has a well developed body. The chest is broad and deep, the strong back is muscular and the broad croup is slightly sloping. The belly is well tucked up. The tail that is either curled or sickle shaped is carried over the back.

A Russo-European Laika has a double coat- a straight and coarse top coat and a dense well developed undercoat. The undercoat make the guard hair appear to stand-off so that the hair would seem to be profuse. Shorter hair coves the head, the ears and the front of the limbs. Hair is longer on the neck, on the withers and on the rear side of the limbs thereby forming a beard, a stand-of collar and a very slight feathering on the limbs. Coat colors can be salt and pepper grey or black with white markings. A Laika may also have a predominantly white coat with colored patches.

The Russo-European Laika forms a strong attachment to its human family. This dog would crave human companionship as it is very loyal and affectionate to its master. The dog would make a suitable pet and playmate of the children as it is exceptionally tolerant of the rough handling of the kids. However, the dog would not tolerate being patted by strangers. A Laika is wary of strangers and would usually show aggressiveness. A ferociously barking Laika with raised hairs at the back would be very intimidating but the dog seldom bites. This is why a RELs socialization must be started when the puppy is about 4 weeks old. Being constantly handled and petted would accustom the pup to being handled by humans. RELs are highly territorial dogs. Dogs in the same household may be tolerated once the pecking order is established but the Laika would show aggressive behavior towards other dogs that intrude in their territory. This dog is not suitable for apartment or city dwelling. Apart from being a barker, a Laika has extensive exercise requirements. The dog would need plenty of exercise, to roam freely to keep mentally and physically fit.

The REL is an energetic breed of dog. As such it would be common for a Laika to come home very dirty. Owners of housebound Laikas may not have this problem and brushing a couple of times every week would be sufficient to maintain the good condition of the coat. Laikas that are utilized to hunt would need a more extensive grooming routine. It may be necessary to bathe the dog after a hunting trip. Daily brushing would also be needed to remove dead hair, burrs and other foreign objects that may have been embedded on the toes and clinging on the dogs profuse hair.

Laikas have always been the favorite dogs of people inhabiting the forested northeastern European part of Russia. Fossil remains of these dogs found in central and northern European archeological sites have verified the fact that these dogs have existed over 10,000 years ago. Laikas were mainly utilized to hunt all kinds of game. Laikas were kept by peasants as watchdogs as well. These dogs are commonly seen running loose behind fenced yards. In the later years of the 19th century, the population of the aboriginal Laika deteriorated when hunting was replaced with agriculture. Deforestations have shrunk the hunting grounds. Consequently, a great number of Laikas fell to disuse. This fact was further aggravated when at the start of the 20th century, settlers coming from the southern and western Russia brought with them different breeds of dogs. The aboriginal Laika stock deteriorated even more.

Russian hunters living in big cities particularly in Moscow and Leningrad were aware of the outstanding hunting abilities of the aboriginal Laikas in northeastern Europe. Dogs were purchased and systematically bred to produce the excellent hunting qualities of the Laika. Several types of dogs with slight differences were produced. These dogs were either named after the breeder or after the province where they were originally developed. The Karelian Laika, Komi Laika, Votyak Laika, Zyrya Laika and the Archangesk Laika were developed from these breeding. Basically, the dogs have the same appearance and would only differ on the muzzle length, size of ears and body and on the color of the coat. These small to medium sized dogs were raised by Russian hunters before the World War 11. Dog samples from the Karelia, from the Archangelsk province, from the Ladoga Lake region serve as the breeding material from where the Russo-European Laika was created. Interestingly, most of the dogs that were developed have red and reddish gray coats. Black and white coated dogs were very few. The years following the World War 11 proved to be hard for the breed. Breed population was greatly decimated. Breeders again bought dogs from Kerelia and from the Archangelsk Province and mated with the surviving dogs. This gave the dogs the white, black and wolf gray coat colors that the Russo-European Laika dogs have today.

In 1944, an experimental kennel was established in Kalinin Province by the All-Union Research Institute for the Hunting Industry. The breeding program for Laikas was headed by E.I Shereshevsky. Well cared for dogs were meticulously tested for the ability to hunt. Through this program, the Russo-European Laika was established. Champion-Pootik and its sister Pomka were the first progenitors of the pedigree. Both dogs have descended from a West Siberian Laika bitch and a white male obtained from the Pomozda District of Komi Republic. Champion-Pootik has won championship titles because of an outstanding conformation. Pomka was highly rated as a hunting dog. Shereshevsky used the dogs to establish the Russo-European Laika pedigree. Succeeding breeding resulted to 40 puppies. Another 40 puppies resulted when both Pomka and Champion-Pootik were mated with other dogs. Most of the puppies were noted to have excellent hunting skills and outstanding conformation. After two generations of breeding the desirable traits of the Russon-European Laika were developed and by 1960 the Russo-European Laika has become a well established purebreed.