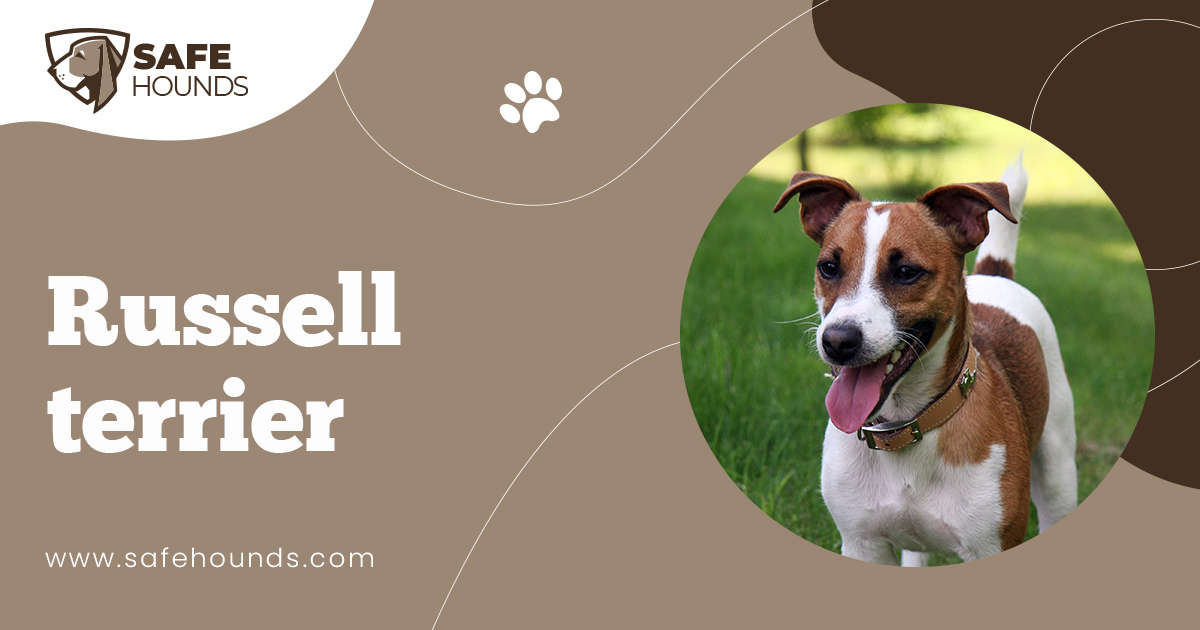 The Russell Terrier is a lively working dog that is tough and very active. They are accurately described as happy, active, and fearless. This breed is always looking for a new adventure. They have almond shaped eyes that are dark and really bring out their intelligence.

The Jack Russell terrier has a fiery demeanor and also what has been referred to as a large personality. Even so, this breed is quite small. Generally speaking, it stands only 10 -15 inches at the withers. Its body has a square like shape that should be proportioned and balanced. This breed is well developed to do the job that it instinctively does and that is chase foxes both above the ground and below the ground. The Russell Terrier has an athletic body, muscular legs, a chest that is flexible and a hand hold tail. This body structure helps it to chase foxes.

The Russell Terrier has a double coat that is weather resistant and dense. The coat can be broken and rough or smooth. The color of the coat is usually white with tan, black or brown. It can also possibly have black and tan markings. This breed needs consistent training from an early age because it is very high energy and mischievous. Proper training will help this high energy dog tremendously.

Beginning in April of 2003, the breed name Jack Russel Terrier was changed by the American Kennel Club to Parson Russell Terrier.

The eyes of the Russell Terrier are dark colored and almond in shape. The ears of this dog are carried close to its head. The ears are shaped like a small V and are moderately thick. This breed has strong teeth where the top overlaps the lower teeth slightly. There are two bites that are acceptable for the Russell Terrier. One is the scissor bite and the other is level. The preferred bite for this breed is the scissor bite.

The hindquarters of this breed should also be muscular and strong. The design of the hindquarters help give this breed good propulsion. The feet of the Russell Terrier look similar to a cat and they dont turn in or out.

The average height of the Russell Terrier is between 10 – 15 inches. The average weight of this breed is 14 – 18 pounds.

The Russell Terrier has a wonderful personality, especially if you like energetic and outgoing dogs. This breed is very devoted, perky, and loving. They are fearless and still obedient if they are given the proper training. The Russell Terrier enjoys playing with toys and playing games. Most Russell Terriers are quite amusing in their antics.

The Russell Terrier is friendly toward children who do not teas them excessively. This breed is quite intelligent but they are known to be quite willful. Because of that, they will do better with an experienced trainer who can give them firm discipline and training. It is also important that this breed is well socialized to help them get along with other dogs. It is highly recommended that you do not let a Russell Terrier off the leash if it has not been properly trained. This breed has very string hunting instincts and they tend to chase objects that move. They like to explore so they need to be watched carefully so they dont run off. Russell Terrier tend to bark and dig and become quite destructive if they are not given enough exercise.

The Russell Terrier is easy to groom and that is true of all coat types. They should be brushed on a regular basis using a firm brush. This breed should be bathed only when necessary. For Russell Terriers, the coat must be stripped if they are going to be shown.

The Russell Terrier can thrive in an apartment setting only if they are given enough exercise. This breed is very active indoors. If it has at least an average size yard, this should be sufficient. If the dog is kept indoors during the day in an apartment or small house, it is recommended that someone stay home with it, unless it has been crate trained. This breed does better when it is given a lot of exercise. This type of exercise will make the Russell Terrier an even better companion.

Compared to some other breeds, the Russell Terrier does not have a long history. It was developed in England in the 19th century. It was developed by a clergyman whose name was Jack Russell. In the beginning, he developed a particular strain of Fox Terrier. From that first strain, the Wire Fox Terrier and Smooth Terrier was developed. The Jack Russell Terrier was also developed from that strain. This breed was originally developed to hunt small game, primarily fox. This dog would dig the quarry out of the fox den. Throughout the years, breeders have tried to emphasize the working quality of this breed. Because of that, the standard for this breed is quite broad and this allows for a large range of acceptable body types. According to history, the Russell Terrier dogs were known to even kept up with the hounds. Throughout its history, the Russell Terrier has been known for its hunting, agility and tracking skills. It has also been known for performing amusing tricks.

In the 1990s. the popularity of this breed increased greatly. That was mainly due to the breed appearing in a popular move and also on TV. Because of the large demand for this breed, it has unfortunately led to much irresponsible breeding.