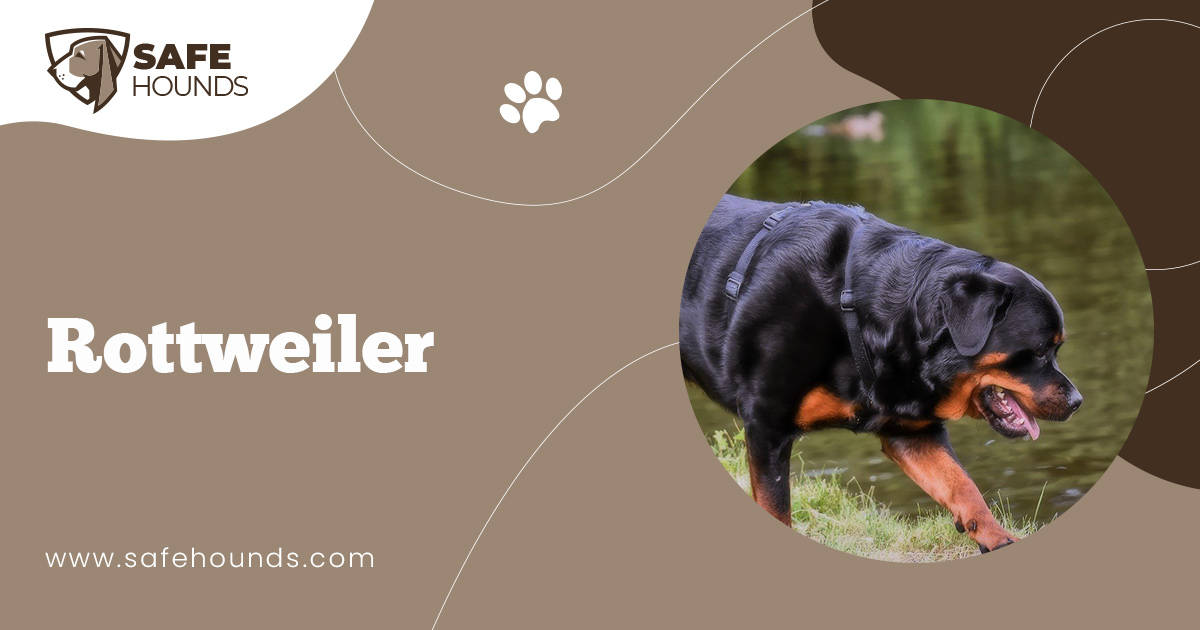 In general the Rottweiler is a very solid, very muscular dog and isnt light or heavy. He shows massive strength and is very flexible for his size. This isnt a nervous breed of dog. He is a very brave dog and will protect you and your family to his death. His walk is a walk of aristocracy and nobility.

He holds his head high showing his stature and wants people to see his how magnificent he really is. Many people are scared of these dogs because of many stories about this breed being killers. These are not all true. The dog usually kills because of protecting his home or owners. Not just to kill. However, the way in which the dog is trained and treated has quite a bit to do with his personality and aggressiveness.

The coats are usually black with well-marked brown spots on the cheeks, snout and can be on the chest and feet. The spots shouldnt be on more than 10 percent of the body. If showing, you do not want an absence of spots totally. This will disqualify your dog.

The Rottweiler likes to trot when he walks because this gives him strength and resistance. He is sure of himself with strong and long steps.

This isnt a dog for everyone. If this dog does not have a job to do, such as herding or guarding then it will become destructive and hard to handle, so make sure you have a job for this dog to do instead of thinking he will enjoy an occasion pat the head and be fine. You do not need to have a dog around that will destroy your house or yard. This is not a dog just to have to play with the kids. This is not a playful little puppy, it is a massive working dog.

The Rottweiler has a huge and massive body with broad shoulders and a rounded head. The muzzle is well developed into a scissors bite. The bite force was measured by a Doctor Brady Barr and a Rottweiler named Rocky was measured at having a bite of between 265 to 328 pounds.

They have dark eyes full of expression and loyalty. They carry their ears forward and they have a black wide nose. The lips and inside their mouth is also black. They usually have their tails docked and their dewclaws removed. There are two reasons for docking. One was because they said it was to prevent infections from mud and other debris covering it from being in fields and pastures. The other was to avoid a tail tax. This is what they used to count their livestock when driven to market. Now, it is mainly for cosmetic reasons.

The Rottweiler usually has large litters with at least 12 puppies. They stand 24 to 27 inches high and weigh 95 to 130 pounds. The female is usually 22 to 25 inches high and weighs 85 to 115 pounds. They are tiny when born and grow very fast. The feet on a Rottweiler are very compact and they have short claws, which are dark in color. They grow up to have very large feet. If he steps on yours, you will surely know it. You will want to keep the toenails clipped unless he has regular activity on blacktop or cement. This will wear them down so there will be no need to keep them clipped.

The Rottweiler is a calm dog much to the surprise of many. They are very courageous and will protect to the death for their family and property. They have a keen sense and are leery of stranger until they get to know them.

Training when they are puppies is very easy. They are like sponges and absorb everything you teach them. They are very smart and will reward you with many years of loyalty when trained properly.

When they do fight, they seem to be immune to pain. Make sure you stand back if they get into it with another dog or a predator. This is not where you can just pull him off. They are being used in the military and law enforcement now because they learn so fast and have proven to be excellent guard dogs. More and more Rottweilers are being seen in the customs business as well for drug sniffing.

There isnt much care to the Rottweilers short coat. You may want to brush him just to get him used to it for shedding purposes. They do not shed much, but it is a good idea to get out the undercoat and keep him looking shiny and clean. Bathing is only necessary when dirty. You do not want to over bath as it will remove the essential oils in the coat.

They need plenty of exercise and never get enough. They need running room out in the country, as this is what makes them happy. They will not wander far from you so they can be trained to stay off the leash. The perfect activities for a Rottweiler is swimming and running while you ride your bike or jog. They love to play with a ball and bring it back to you as well.

Many believe the Rottweiler is a distant cousin of the Mastiff. It was used as a herding dog during the middle ages. Being bred in Rottweil in Wurttemberg is probably where it received its name. This breed was almost extinct in the 1800s, but made a comeback in the early 20th century with breeders in Stuttgart.

The town they came from is known as Rottweil. The Romans developed and transformed this town into a fortified villa. The houses were of a red hand made tiles so that is where the name of the town came from. The Suebi and the Alemanni tribes took over the town and slaughtered the Roman population. No one knows what became of the dogs they used for working. However, they were trained to guard their masters home to the death. Therefore, it is speculated that few survived.

By the time the Middle Ages rolled around, they had a royal court that took over and had jurisdiction. The cattle dealers and butchers took the dog of Rottweil and made great use of them. They used all the qualities of the ancestors in molding these. Their speed, herding ability, guarding ability, strength, and power but most important was their intelligence. They created two types of the breed out of this mix. The first was the large ponderosa, which they used for drafting and the smaller more agile, which was used mainly for the herding. The last one is the one we know today. There are still the larger ones around but do not stand out in show rings.

Theres an old story of drovers that was explained like this. The Drovers would sell their cattle after the long drive, then head on over to the bier Keller to celebrate. However, before beginning the celebration, they would tie the money from their sales around the dogs neck. They said they did this because no matter how drunk they got they knew their money would be safe until they woke up in the morning.

As Europe and other countries became industrialized there seemed to be no use for the working Rottweiler. That is until 1910 when the German Police Dog Association recognized them. The first two dogs to be recognized were Max Von der Strahlenberg and Flock von Hamburg. This started many clubs in the early 1900s.

The breed is an ancient breed like many others. It has been traced back to the Roman Empire. They were used for herding at that time. They were also used to drive the cattle from robbers. They were very protective of their cattle. Not too many would mess with the cattle when they saw a Rottweiler nearby.