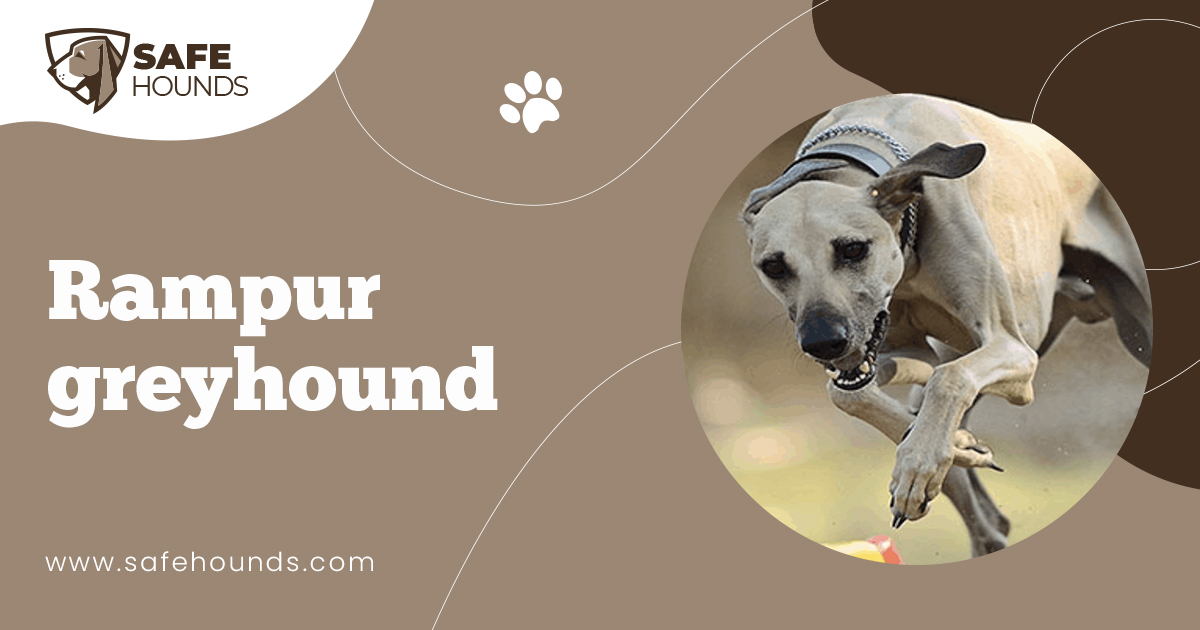 The exotic looking dog of the Far East is poetry in motion. The dog is poised and precariously standing on a very narrow ledge in one swift fluid movement, the dog bounced off a half inch board and scaled the 6 foot fence. This very strong and agile dog has an amazing sense of balance and speed. The dog is claimed to have the ability to run about 60 kilometers per hour. The dog is a Rampur Greyhound, dubbed as the Greyhound of the Orient and the favorite hunting dog of the Indian Maharajas. The origin of this breed was lost in obscurity. The precise history of this hunting breed is unknown although it was believed that the breed was developed in the Rampur district between Delhi and Bareilly in Northern India.

North Indian Greyhound, Rampur Hound, Rampuri and Rampuree all these names refer to Rampur Greyhound, a breed of dog that belongs to the sighthound family. This breed that has been around for hundreds of years was highly valued for its ability to control jackal population. Hunting was a favorite pass time in India during the royal era. Breeds of hounds were developed to cater to the aristocracys need for outstanding hunting dogs. The Rampuri Greyhound is one of these breeds. The dogs exceptional hunting prowess is combined with speed and endurance. The dog can cover great distances and withstand long hours of hunting even in the harshest terrain and under Indias extremely hot weather. Rampuri Greyhounds were favored hunting companions of maharajas as the dogs legendary hunting ability was proven. These very ferocious dogs will not be intimidated by lions, tigers, leopards and panthers. These dogs hunt wild boars, foxes, hares and a variety of fowls as well.

A Rampuri Greyhound is a perfectly beautiful breed. It was not named the Golden Greyhound of the Orient for nothing. This beautiful breed is highly admired not only for exceptional hunting ability but for its great personality as well.

The Rampur Greyhound is a beautiful breed of Indian dog with a well developed bone structure and aerodynamic body that suggests great strength, speed and immense endurance. This tall and elegant dog has long straight legs. A Rampur Greyhound is renowned for its speed and sense of balance. These breed traits were attributed to the long legs and to the distinctive feet of the dog. These dogs long arched feet with well developed webbing between the toes are comparable to an all terrain vehicles tires. The feet with its thick pads and powerful claws give the dog amazing sense of balance, cat-like grip and speed. The very flexible toes can be bent backwards a bit similar to human fingers.

Compared to an English Greyhound, the Rampur Greyhound has a broader and substantial head. The skull is flat, the muzzle narrow, long and pointed. This breed has the characteristic Roman pointed nose. Big pendant style ears are set on high. Yellow to golden brown eyes are outlined in kohl. When the eyes reflect certain lights in the dark the eyes will have an eerie greenish and yellow glow. The eyes have an intelligent, determined and steadfast expression. A dog that means business would have a very intimidating appearance.

This breeds long muscular neck is broad and arched. The not too wide chest with well sprung ribs, the high slim waist and the well arched loins give the dog a sleek appearance. The long thin tail that tapers to the tip is carried low to the ground with the end forming an upward sweep. The short coat gives this dog the appearance of a newly trimmed horse. The coarse prickly hair is very fine and almost non-existent allowing the skin to be easily seen. Common coat colors are mouse grey, brindle fawn, white and black. Black though is the most preferred coat color. A gray and grizzle colored coat enables the dog to completely blend with the foliage and can be an advantage when the dog is hunting.

The Rampur Greyhound is an affectionate and friendly breed. Fiercely protective of its family, it makes an excellent watch and guard dog. This hunting dog forms a close bond with its family but it tends to choose a family member to be its favorite person. Once this breed chooses you, you can be sure to have a steadfast friend till the end. This is a playful breed. The dog is a suitable choice for a very active person. The dog will be a lively playmate of the children but because of its large size, its interaction with the kids must always be supervised. At play, the dog would charge at its playmate at full speed and butt the playmates chest. The dog can inadvertently hurt a small child. The Rampur Greyhound definitely needs to be socialized as it has the tendency to fight with other dogs. Because of a high prey drive, the dog would be dangerous to smaller pets.

A Rampur Greyhound is a low maintenance breed. The very short hair may not even need brushing. A chamois cloth rubbed on the coat would maintain its immaculate condition. Indian hunters usually bathe the dog in a river or in a pond after it is hunted. This breed is generally healthy and free from genetic diseases though it has the tendency to develop bloat and osteosarcoma. This breed has a life expectancy of 15 years. A Rampur Greyhound would not be happy if made to live in apartment or in cramped living quarters. This dog would need large open spaces because of its high exercise requirements. The dog is very lean thus, owners should provide the dog with soft bedding to prevent the dog from developing sores.

About a hundred years ago, hunting enthusiast in India would meet together with their hounds before sunrise for a hunt. Someone would beat the bushes and when the game scampered, the hunters will let the hounds loose to run after the prey. The dogs possess the strength, the stamina, the speed and the high prey drive so that only very few of the hunted animal can get away. This outstanding breed of sight hound is highly valued in India. These are the Rampur Greyhounds, considered to be royal dogs because they are commonly chosen by the royalty for a hunting companion. These smooth haired dogs were originally used for jackal control. Word spread about a Rampur Greyhounds ability to take down a jackal. The exceptional hunting ability of the dog was discovered. The breed gained the interest of the Indian royalty. The Rampur Greyhounds became the favorite hunting companions of the maharajas.

The Rampur Greyhound is considered to be Indias contribution to the pedigreed dog breeds. This hound was named after the province where it has originated. These dogs were developed in Rampur, a fiefdom between the Delhi metropolis and Bareilly City in the northern state of India. The breed is speculated to have been around for about 300 years. Being an ancient breed, its history similar to other ancient breeds was also lost in the mist of time. Throughout the history of dogs, these animals have always been highly valued. What can be a more fitting gift to a ruler than dogs that are highly valued in ones own land? Some historians believe that the breed was developed from the dogs of caravans from Persia because a Rampur Greyhound closely resembles an Arab hound.

There is another theory on how this breed originated. Hunting was a favorite pass time during Indias royal era. His Royal Highness Ahmed Ali Khan Bahadur, the ruler of Rampur was an avid hunter. Wanting to create a breed that he can use in hunting wild boar, he crossed native hunting dogs with Tazis, Afghans and English Greyhounds. The breeding objective is to create a powerful and ferocious breed, one that could endure the varied climatic conditions of India and most importantly, a breed that will be more obedient. The Rampur Greyhound was born, a breed that has the unfaltering ferocious character of its Tazi and Afghan ancestors and the speed of the English Greyhound. The dog has the speed to keep up with the fastest prey and the courage and ferociousness to face large and more ferocious wild animals.

Several years after its development, the breed has gained a large following. The dogs were not only hunted in its place of origin but also in other parts of India. The Pathan traders carried the dogs to Central India, Rajputana and lower Bengal. The fall from power of the Maharajas in 1947 cause the decline of the breeds popularity. Keeping these large dogs is no longer fashionable when hunting became a restricted activity. The poor hunt for food but keeping these dogs would not be practical because of the high cost of maintenance. In recent years, breed popularity has again risen.