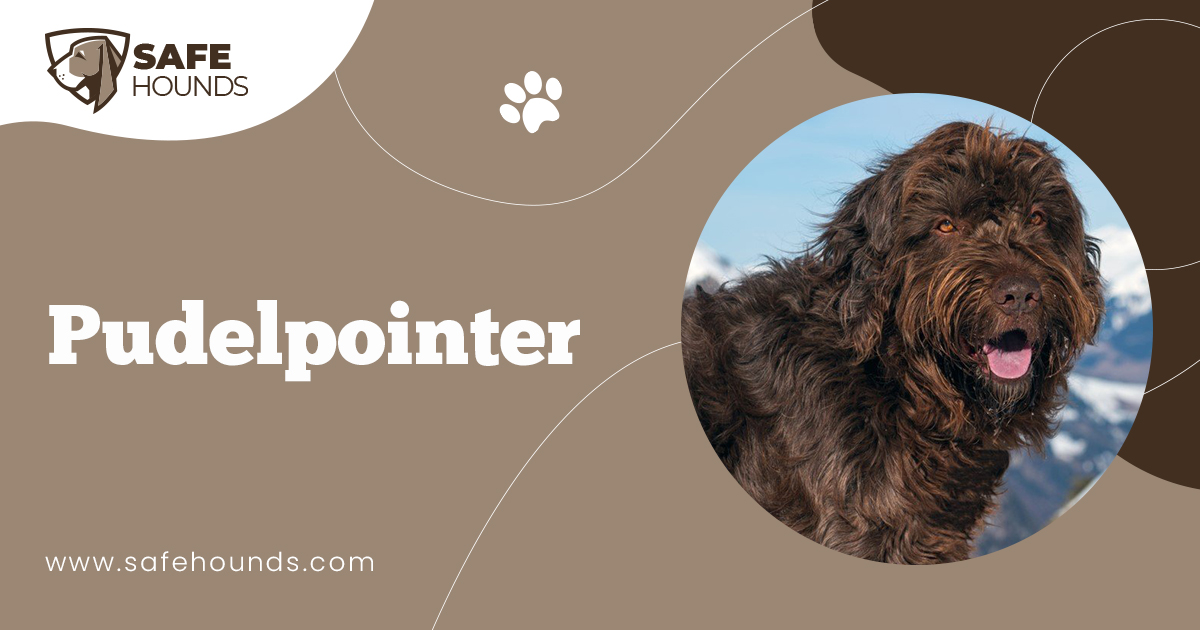 The Pudelpointer is a handsome dog. It is often described as the mustachioed dog with the sparkling eyes. This medium sized dog weighs from 45 to 65 pounds and measured at the withers, the dog stands from 21 to 26 inches. The harsh wiry coat can be black, brown or can take the color of dead leaf. To the uninitiated, the dog would appear to be a German Wire Haired Pointer. The dog though is a Pudelpointer, a versatile breed of hunting dog that was developed in Germany during the later part of the 19th century. It is not surprising for the Pudelpointer to look like a German Pointer so much so that it would be difficult to tell them apart given that pointers and poodles were named as the ancestors of this rare German breed.

When the breed was created by Baron von Zedlitz, the goal is to create a dog that would be an excellent hunter and at the same time a dog that would be a most valued loyal and affectionate home companion. The Pudelpointer is actually a passionate and tireless hunter. Armed with a good nose, an unwavering persistence, excellent stamina as well as a hardy body and a bramble resistant coat, the dog would willingly work under the blazing sun on frigid snow practically in any kind of weather. The dog was originally developed to hunt feathered and small furred game. This breed is not expected to hunt deer and wild boar but it does have an outstanding ability for blood tracking. The Pudelpointer is a joy to have on a hunting trip. Although it is an energetic and enthusiastic hunter, the dog has the patience to quietly wait for hours in a duck blind. And once hunting season is over, the dog, with its great desire to please would be an ideal home companion.

The dog that looks like a German Wire Haired Pointer but is not! The dog is a Pudelpointer, a rather rare breed of gundog that hails from Germany. This breed possesses an athletic body whose length is more than the height in a 10 to 9 ratio. The head that is of balanced width and length is well proportioned to the size of the dog. The flat skull is rather broad and rounded at the sides. The stop is well pronounced. Muzzle is neither narrow nor pointed. Nasal bridge is straight and the nose that has well opened nostrils has pigmentation that corresponds to the color of the coat. Lips are tight fitting and jaws are strong and powerful. Large teeth meet in a regular or scissor bite. Large eyes of dark amber color give the dog a lively expression. Eye rims that are close fitting to the eyeballs are well covered with hair. Medium sized set on high ears have rounded tips and well covered with hair. The well muscled neck is medium in length, slightly arched and has no dewlap. This breed has an athletic body. The topline is straight, the withers well pronounced and the straight short back is well muscled. Broad and deep chest has well arched ribs. The belly is slightly tucked up towards the rear giving the dog an elegant and slender appearance.

A Pudelpointer has a tight fitting skin that is closely covered with flat lying top coat and a dense undercoat. The long facial hair that forms a beard is a distinct characteristic of this breed. The coat is rather harsh to the touch. This coat protects the dog from extremely hot or cold weather as well as from injuries that may be sustained when the dog hunts under thick vegetation. This breed has a solidly colored coat. Coat color may be brown or black. The coat can also have a dead leaf color. Some specimens may have small white markings.

Because of its well honed hunting instincts, the Pudelpointer is a highly prized hunting companion. However, the dog also has a well balanced temperament that makes it a suitable home companion. The cooperative attitude of this enthusiastic hunter is also manifested at home. After the hunting season, the dog plays another role that of being a loyal companion to its master, a well behaved clean pet of the lady of the house and the gentle and lively playmate of the children. This intelligent and highly trainable dog is very affectionate as well. No wonder it has captured the hearts of many dog lovers. The Pudelpointer has high energy levels. The dog is tireless as well. The dog is not suited for apartment living as it would require daily vigorous exercises that only living in the country can provide. The dog loves the water and loves to run unrestricted by a leash. The dog is a fine hunting companion but it would make a finer house companion if its high exercise requirements are met.

The Pudelpointer is a naturally clean dog. This breed would not need frequent bathing. The dog is an average shedder and a once or a twice a week brushing would remove dead, distribute the natural oils and promote the good condition of the coat. Ear cleaning though must be done more often especially if the dog has been hunting as mites and grass seeds may be trapped on the ears of the dog.

The Pudelpointer is a rare hunting breed that was developed in the 19th century in Germany. The objective of the breeding is to produce a versatile dog that will both be a runner and a retriever, a dog that would work in varied weather conditions, on land and on water. True enough, the dog that was created is a passionate hunter. The Pudelpointer is considered to be a specialist in hunting partridge, wild rabbits and marsh birds. The dog blood tracks big game too. The dog is intelligent and easy to train as well. It has a good nose and an excellent pointing instinct. These are not the only outstanding characteristics of this breed as the Pudelpointer can be a calm and docile dog that would be content to lie unobtrusively by the fire or at the feet of the master. The hunter is an excellent home companion as well.

As the name suggest, the Pudelpointer is genetically a combination of poodles and pointers. Rather than being a French breed, the Pudelpointer is considered to be a German creation. In the late 19th century hunting was a most favored sport of the landed gentry. Because large kennels are kept, cross breeding is a common practice. In 1881, Baron von Zedlitz, a German breeder have started cross breeding German hunting poodles with English pointers. The purpose of the experimentation is to create an all around hunting dog. The Pudelpointer breed was not created overnight. Seven poodles and 90 wire haired, short haired and other utility pointers were used in the experimentation. The original breeding made use of Tell, an English Pointer owned by the German Emperor Frederick 111. The dam was Molly, a German hunting pudel (the German name for poodle) owned by Hegewald, the famous author known for his writings on hunting dogs. Some dog experts believed that Baron von Zedlitz had really used the Poodle in creating the Pudelpointer. However, other experts believe that the Pudelpointer was developed from the Barbets. Incidentally, the Barbets are the ancestor of the Poodle. The intelligence, the attachment and the great desire to please the owner, the passion top hunt on land and on water as well as the inherent retrieving ability was inherited by the Pudelpointer from the Poodle. The excellent scenting ability, the hunting skills and the tenacity to track game are characteristics typical to a pointer.

Whatever the true origin of the Pudelpointer may be, it can not be denied that this breed is a quintessential hunter. The dog not only hunts furred and feathered game. It is also utilized to track blood trail of wounded game. In Germany, the hunters are bound by an honor code to find animals that were wounded by a shot gone bad. The Pudelpointer is an ace at finding wounded game. Once the game is found, the dog would bay to point to the hunter the location of the prey. In instances where the dog is naturally mute, a bringsel or a short strap attached to the collar will be taken by mouth and will be brought to the master signifying that the prey is found. In its native land, the Pudelpointer has to pass field and water trials before it can be registered as a Pudelpointer.