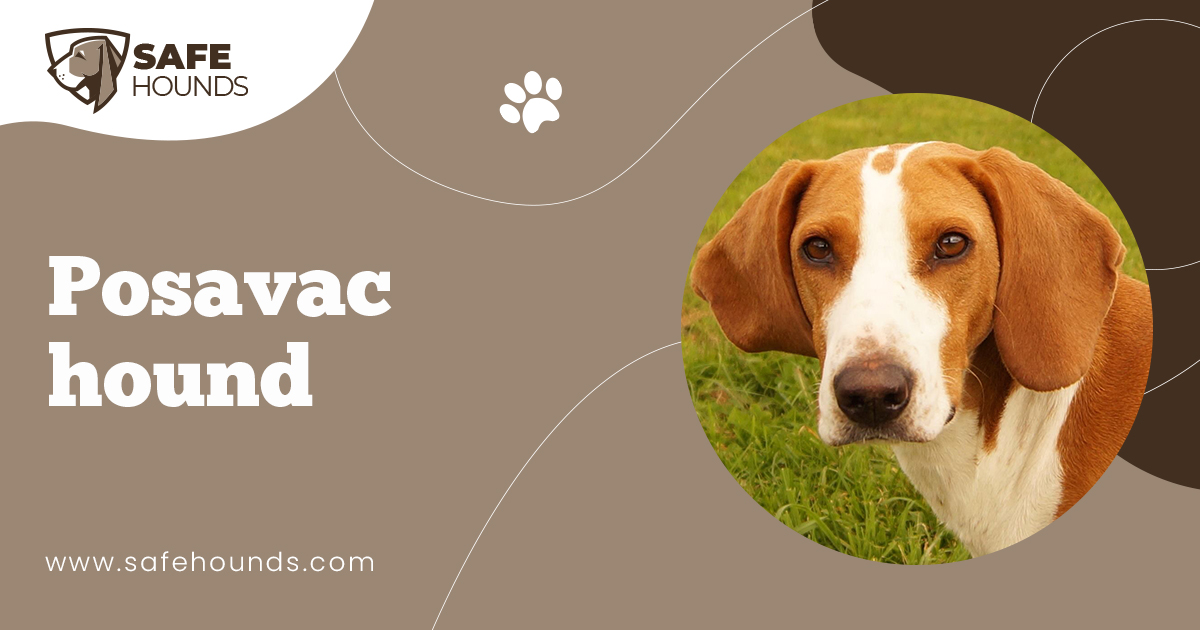 The Posavac Hound was certified by FCI in 1955 as a unique breed. These dogs were developed in the territories that comprise the former Yugoslavia. Nothing was certain about the origin of this breed but it was speculated that the dogs were developed from the Egyptian dogs that were brought by traders via the Adriatic ports. The Posavac Hound is a robust dog. The compact and powerful longer than tall body signify strength and agility. This is a very fast dog the effortless gallop covers ground easily. This breed of scent hound that was developed and thrived in the Sava Valley thousands of years ago possesses an excellent scenting ability and a high pitched sonorous bark. The good nose, the surefootedness coupled with the speed and the stamina make the dog one mean hunter of small game and deer. The beautiful and impressive red or wheaten colored coat is not just for show as the tough, rough and dense coat protects the dog from brambles when it hunts under heavy vegetation.

The Posavac Hound is primarily a hunter. This passionate and energetic hunter would always enjoy a hunting expedition. But because it also forms a strong attachment to its master, the dog would be calm and docile inside the house. This breed is naturally sweet and affectionate. The gentle nature of the dog makes it an ideal home companion. Although these dogs bond strongly with the master, training can be a bit difficult. Used to hunting independently, the dog may not easily take to training. This breed can be trained but the handler or the owner needs to have a lot of patience given that these dogs are independent thinkers. This breed is not suitable for first time dog owners. A firm owner and consistent training is necessary to establish who the leader of the pack is. It must be clearly defined that the master is the leader and that ranks of other family members must be higher than the dog. Socialization must be started early as the dog is wary of strangers. Socialization would curb the dogs tendency to be aggressive and dominant.

The Posavac Hound is a fairly healthy breed and noted to have a life expectancy of more than 12 years.

The Posavac Hound is a breed of scent with a sturdy body and a beautiful coat. Hair that is about 2 to 3 cm in length covers the elastic well fitting skin. The straight close-lying hair densely covers the entire body. Even the belly of the dog is well covered with thick hair. Slightly longer hair covers the underside of the belly, the rear of the limbs and the underside of the tail. Coat color range from all shades of reddish wheaten, red and fawn. Some individuals may have an eye-catching yellow coat. A Posavac Hound usually has a white marking on the head that can take the shape of a star, a blaze or a wide patch of white hair. The neck, the throat, chest and underbelly as well as on the inner sides of the limbs and on the end of the tail may have white markings.

The Posavac Hound has a rather long and narrow head and a slightly domed forehead. This dog has a rounded skull though seen from above the skull appears to be oval in shape. The frontal furrow is well pronounced though the visible stop is not very well marked. The dog has a slightly convex nasal bridge and a long muzzle. The broad nose can either be black or dark brown in color. Dark or black pigmented thick lips are tight fitting. Complete strong teeth meet in a scissor bite. The large dark colored eyes that are alert though with a gentle expression show the dogs lively character and its sweet tempered nature. Droopy ears with rounded tips hang close to the cheeks. Well muscled neck is tightly fitted with skin.

A Posavac Hounds long back has a level topline. The loin is broad and well muscled, the broad chest is deep, the ribs well sprung and the belly is tucked up. Tail that is average in length is broad at the base and well covered with thick hair. The underside of the tail has longer hair. Tail is usually carried saber fashion.

The Posavac Hound is a passionate and enthusiastic hunter. The breed is also known to have a docile and even temperament. As it forms a strong attachment to its master and to its human family, a Posavac also makes a suitable home companion. This breed makes a good watchdog as apart from its wariness with strangers it is noted for its strong bark that warns the family of intruders and intimidates burglars. This is a friendly breed. The dog makes a gentle playmate of the children, especially children it has grown with. The dog will tolerate other dogs in the household as they will be considered as members of the pack. However, a Posugac should not be trusted with smaller pets. Because of a high prey drive, it would be inevitable for the dog to chase smaller animals. The Posugac would do well in a home with a yard. This dog has high exercise requirements. Because it needs to be active, it would enjoy being given a task to do. The dog can live in the city or in an apartment as long as the exercise requirements of the dog are provided by the owner. This would mean daily long walks in the park. This dog would be a suitable jogging and hiking companion.

The short coat of the Posavac would be easy to groom. The breed is an average shedder. Regular brushing with a soft bristled brush would be enough to remove dead hair. Rubbing the dog with a chamois cloth or a towel would bring out the sheen of the coat. Bathing should only be done only when necessary. Because the coat is short, it will not provide the dog proper insulation against cold weather. Make sure to thoroughly dry the dog after it has gone on a hunting trip. Regularly check the ears and the feet for any foreign objects that can cause infection.

The Posavac Hound is an ancient breed of dog whose origin was lost in time. However, ancient records testify to the dogs ancient origin. The 1474 frescoes in the chapel dedicated to Saint Mary Beram near Pazin, the 1719 chronicle of Bishop of Djakovo Bakic that is presently kept in the Djakovo diocese is considered to be the oldest written document that mentioned the bred, the 1859 veterinary documents as well as the books by Jose Kristen bear witness to the Posavac Hounds ancient history.

The Posavac Hound was originally developed in Croatia when Molossian hunting dogs were crossed with the imported Egyptian sight hounds. These Sava Valley hounds were named boskini by the Croatians and were sold in the neighboring regions. At the beginning of this breeds life, a standard size was not given much importance. As such, the dogs came in varying sizes. Formal breeding that created a consistent size was only started at the beginning of the 18th century. In 1929, the first entries on the Croatian book of origins were made. The breed was internationally recognized as the Posavac Hound in the 1948 FCI convention in Bled. However, when the breed was registered with FCI in 1955 it was under the nameKarst Hound. The name was again changed to Posavec Hond in 1959. This verifies that fact that the hound originated from a vast wooded area south-east of Zagreb, the Sava Valley (Posavina).

The Posavac Hound became a breed indigenous to Croatia in November 2003 through the final conclusion of the FCI General Committee. However, this breed was believed to have originated from the other territories that comprise the former Yugoslavia. Dog experts believed that the Posavac Hound and the Istrian Hound share the same origin as both have originated from the Mediterranina Hound. It was also speculated that the breed has actually originated from Bosnian and Herzegovina. Dog of the same appearance with the Posavac were found in these areas. The existence of these dogs was described in various writings. In H. Zimmermanns Das Lexikon de Hundefreunde, the Posovac was erroneously identified as Istrian Hound. In 1949, Dr. Lovrencic has written about dogs that resemble present day Posavac in Istria. In 1938, the Yugoslav register of breeds had 20 entries of Posavac Hounds, all of which came from Slovene towns.