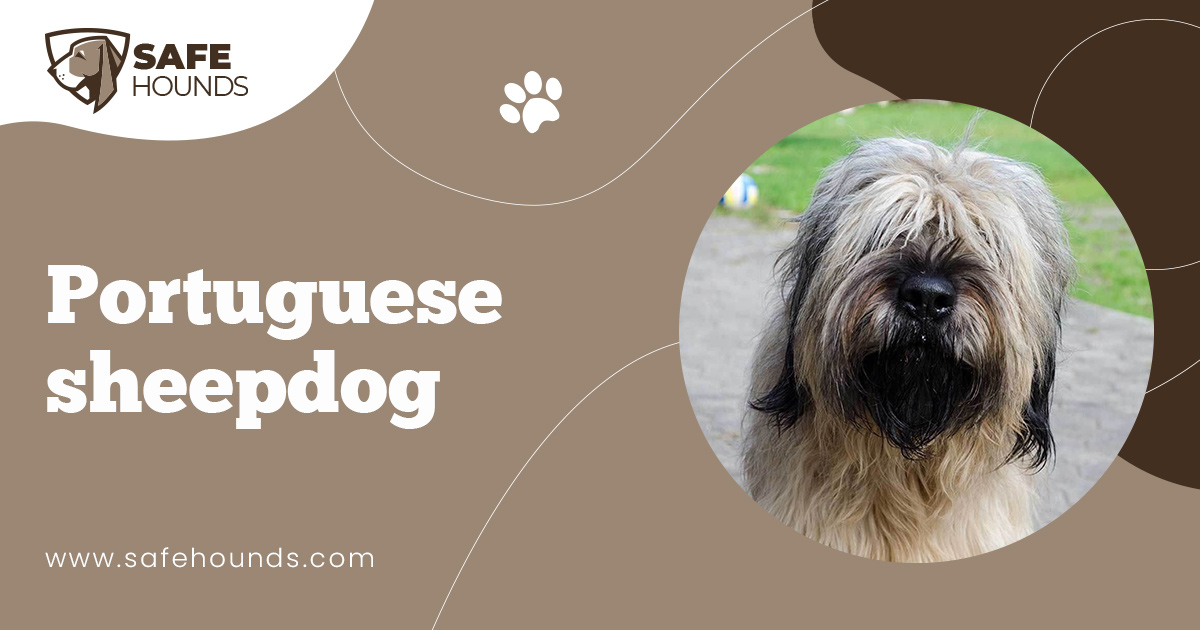 The Portuguese Shepherd Dog or the dog that is popularly known as Portuguese Sheepdog in Portugal is a beautiful breed of dog that is commonly found with flocks of sheep in the pastures in the Serra mountain ranges and in the southern plains of Portugal. This breed has existed for about a hundred years and has been a dependable helper and companion of the poor shepherds in Portugal. The dog is hardy it has adapted well to the freezing winters and to the windy and dusty summers of its country of origin. This is a hardworking breed. The dog would stand over its flock and prevent its charges from straying. This dependable shepherd has the outstanding ability to find and to bring back strays.

The Portuguese Sheepdog is a beautiful breed. The dogs long wavy and distinctly colored coat gives this working dog an elegant appearance. In recent years, the dog has become a valued addition to the family. Owning this breed would be a novelty because of its rather quaint appearance. The dog is affectionately called monkey dog as the long upstanding hair on its face gives it a monkey-like appearance. This breed also has a monkey-like bubbly and cheerful temperament. This dog was once considered to be a rare breed but it is slowly gaining recognition outside its country of origin.

The Portuguese Sheepdog was originally utilized by the poor shepherds in the Serra de Aires Mountain ranges and on the southern plains of Portugal. In later years, the dog was highly valued for its lively temperament and for its rather peculiar appearance. Did you known that the Portuguese Sheepdog is the only breed of herding dog without an undercoat? This makes the dog less resistant to extreme weather conditions. This type of coat though is a plus factor for choosing this breed for a pet. The dog would not need extensive maintenance as its coat is matt free. The dog has a peculiar face that is very similar to the face of a monkey. This is the reason why the dog was fondly called monkey dog. A Portuguese Sheepdog has a long coat that is slightly wavy. The coat that has the texture of a goats hair is moderately thick. This type of hair comes in yellow, chestnut, fawn, black and in wolf gray color. A Portuguese Sheepdog can have tan markings. A white patch on the chest of the dog enhances its appearance. Long smooth hair covers the head as well as the entire body of the dog. The upstanding coarse longish hair that covers the head forms an untidy looking beard, moustache and eye brows and give the dog a wizened appearance. The dog has a broad head, a straight cylindrical muzzle and a slightly raised black or dark colored nose with large nostrils. Medium sized ears hang down close to the sides of the head. Round dark eyes give the dog a gentle expression. This is a medium sized rather long on the legs breed. The dogs long back is straight. The medium width chest is deep. Set on high tail tapers to the tip and is usually carried between the legs when the dog is at rest. The tail is rolled up with a curved tip when the dog is in motion.

The Portuguese Sheepdog can be considered as a dog with a one-track mind. For this breed nothing is more important than the animals under its care. The dog is an independent worker. The dog instinctively knows what must be done to protect the herds of cows or the flocks of sheep. This clever dog knows what must be done to bring back strays. This dog forms a strong attachment with its master. A dog that is solely kept as a pet would consider the family to be above all else. Eager to please, the dog responds well to obedience training. Because of its lively and well balanced temperament it makes a suitable companion and playmate of the children. This breed though is dominant with other dogs. Socialization is necessary to curb the dogs dominant attitude. These dogs are protective of their family that is why they make good guard dogs. A Portuguese Sheepdog would not be a good choice for person living in an apartment. The dog is accustomed to living in the open. Being a working dog, it also has high exercise requirements

The Portuguese Sheepdog has a long wavy coat but unlike other long coated breeds, this dog requires low maintenance given that it does not have an undercoat. This means that the dogs hair would be tangle free. An owner of this breed can get away with occasional brushing. Frequent coat brushing would mar the rough and wavy appearance of the coat. Bathing must only be done when a damp cloth rubbed on the coat cannot remove the dirt. Frequent bathing will remove the natural oils that protect and weatherproof the coat. A Portuguese Sheepdog though would need regular ear cleaning and nail clipping.

The Portuguese Sheepdog is not an ancient breed having existed for barely a hundred years. However, the precise origin of this breed is a bone of contention between historians and breed enthusiasts. All there is of the breeds origin are speculations. The Portuguese Sheepdog origin is undocumented given that most working dogs development are not recorded until the 1900s. Because this breed has a striking resemblance to the Berger de Pyrenees and to the Catalan sheepdog, it was speculated that it has descended from these European breeds of sheepdogs. However as there were no reliable evidence, this theory was not scientifically proven. Another theory speculates that the Portuguese Sheepdog have descended from the Briards that were imported to Portugal by Conde de Castro Guimaraes in the early 1900s. These dogs that were brought by the Conde from the coastal town of Cascais were crossed with local mountain dogs and resulted to the medium sized dog with an extraordinary furry face that resembles that of a monkeys. Some historians agree to the theory that the Briard really played a major role in the creation of the Portuguese Sheepdog but because of the similarity in appearance they believed that Pyrenean Sheepdog blood was introduced to improve the appearance of the breed.

The Portuguese Sheepdog is highly valued for its invaluable herding abilities. This bred have been the able and dependable helpers and loyal companions of the poor shepherds in the Serra de Aires and on the southern plains of Portugal. These dogs have become an important part of Portugals farming operations. Sadly, the breed was almost brought to extinction in the 1970s. The Cao da Serra the Aires is a working breed with impressive looks. The extraordinary attractive appearance saved the breed from extinction. This breed has gained the cao macaco (monkey dog) nickname because of its peculiar undog-like face. This breed is noted for its lively and well balanced temperament. The dog that was once the companion of animals in the pasture has gained recognition for being an ideal pet. Suddenly, the Portuguese Sheepdog is being sought by middle class Portuguese society. This dog noted for having a vibrant personality loves the family above all else.

Although the breed was saved from extinction, the Portuguese Sheepdog is still relatively unknown outside its country of origin. Since the breed was recognized by FCI in 1996, the dogs have become a popular choice for companion in Europe and in United States.