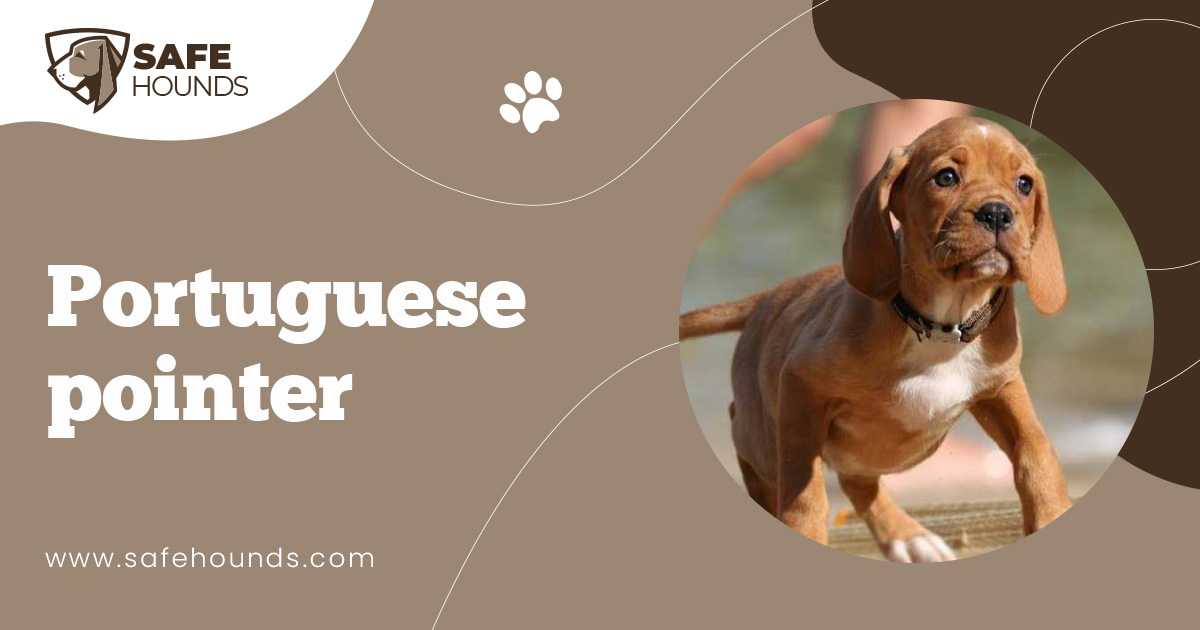 The Portuguese Pointer is most commonly known in Portugal (its native land) as the Perdigueiro Portugueso. The dog was given the name Portuguese Partridge Dog because for centuries the dog was used in hunting Perdiz, a native bird in the Iberian Peninsula. The Portuguese Pointer is an excellent hunter, one that can hunt in harsh terrain and in any kind of weather. Although considered to be rare even in its country of origin, the dog is popular among hunters. Because of its excellent hunting ability the dog was give the nickname the National by Portuguese hunters.

Originally developed as a gun dog to hunt small and big game a Portuguese Pointer is a joy to hunt with. These dogs have an inherent strong hunting ability. At the age of 3 or 4 months, a puppy would start pointing and retrieving without any training from the master.

A tenacious hunter, the Portuguese Pointer scenting a game will stand still, alert, the head would be immobile concentrating face is furrowed, glassy eyes would stare fixedly and the ears would be poised and intently listening and once the excellent olfactory senses feels the nearness of the prey would sprint to point the game to the hunter.

The Portuguese Pointer is a medium sized dog that has a dense short rough coat that can be chestnut and yellow colored. Some dogs would have solidly colored coats while others would have some white Irish patterns on the muzzle, neck, chest and legs.

Aside from the adorable appearance and the excellent hunting abilities, these dogs are most valued for their loyalty to the human family. These dogs are often times jokingly called the velcro dogs because of its tendency to stay close and stick to the master. Portuguese Pointers are known to develop an unwavering loyalty and affection to the master to the point that the display of affection can be embarrassing. A PP with a sweet and tender affectionate look in its eyes would sit for hours looking adoringly at the master. This rather embarrassing attitude of the dog can be corrected with training.

A Portuguese Pointer is a moderately sized bracoid type dog. The dogs skull is slightly domed and broad. The head that is proportionate to the body is smoothly covered with velvet textured hair. The slightly tapering muzzle is deep. The dark pigmented upper lip naturally falls over the lower lip giving the muzzle an almost square appearance. Nostrils are well shaped, large and open. A grayish yellow dog would have a black nose and brown coated dogs would have light brown noses.

Portuguese Pointers have normal dentition that meet in a scissors bite. The large oval shaped brown colored eyes have a bright and intelligent expression. Pigmentation of eyelid is the same as the color of the nose. The medium length ears (less than six inches) are set on high. Wider at the base and rounded at the tip ears are covered with short silky soft hair. Ears would hang flat close to the cheeks when the dog is resting but when the dog is alert the ears would roll forward creating one or two wrinkles or furrows.

The dog has a slightly longer than tall body. Chest of moderate width is deep reaching to the level of the elbows, ribs are well sprung. Dogs back is straight and broad. A Portuguese Pointers tail is set on high, straight, thick at the base and gradually tapering to the tip. At rest, the tail would hand down covering the genital area but never between the legs. If the dog is alert or on the move the tail is always carried level or slightly higher than the level of the back, never vertical or forming a sickle. When hunting the dog would move the tail in perfect synchronization with the gait. The tail is generally docked to a third of the natural length.

Coat color ranges from shades of yellow and brown. Some dogs would have one distinct color and others would have white Irish patterned white markings on the muzzle, neck, abdomen and legs. A Portuguese Pointers coat is short. The coat on the dogs back is dense but coarse or rough to the touch. The coat on the abdomen, groin and inner thighs is less thick but soft and silky to the touch. The same type of coat covers the head but the hair on the ears is softer and velvety to the touch.

Portuguese Pointers are highly intelligent dogs that would be easy to train. Because they have this utmost desire to please the master obedience training will be a breeze. Their extreme dedication to the master would make them obey hunting commands with extreme joy. Portuguese Pointers are tenacious hunters that can smell a bird 100 yards away. Unlike other hunting dogs, a PP would not hunt by itself. The dog would always share the hunt with the master.

Every breeder and owner of a Portuguese Pointer would attest to the dogs intense affectionate nature. Even in the AKC standard the dogs unwavering loyalty and adoration to the master was mentioned. This characteristic of the dog can be highly inappropriate and embarrassing. This intense devotion can be very disconcerting especially if the dog would disregard commands just to be close to the master. Indoors or outdoors, these dogs would always want to be beside the owner. If allowed these dogs would love nothing more than to be in bed with the master.

A Portuguese Pointer will make a good watch dog as they are a territorial breed. Any intrusion will be met by a ferocious loud bark. However, a PP would be a poor guard dog given that this is a friendly breed.

Friendly, loving and attentive, these are the traits that transform a Portuguese Pointer from an excellent gun dog to a family pet. While hunting the dog will be very tenacious but at home the dog would be kind and submissive. These dogs would thrive on physical contacts with the family. PPs are gentle with kids and would enjoy being a part of family activities. PPs get along with other dogs and smaller pets too.

This affectionate cuddly dog however is not for everyone not for an owner who does not have the time to spend with the dog. This breed would demand constant attention from the master. Being highly intelligent they would need to be mentally stimulated otherwise they can be very destructive. A PP would need a master who will both be firm and affectionate, a master who will understand the needs of his pet. A PP may look docile and cuddly but a bored PP may decide to replant the potted plants, raid the garbage can, filch food from the table when the masters back is turned and rearrange the interior and exterior decors of the house.

A Portuguese Pointer is first and foremost a gun dog. They were only trained to be a house pet and as such they have the inherent prey drive and the need for vigorous exercise. This is probably the reason why an apartment is not a suitable dwelling for the dog. The dog would do well in a suburban or rural area where ample space will be provided to allow the dog to roam freely. Likewise, the most suitable owner is one that loves the outdoors.

Portuguese Pointers would need minimal maintenance. The short coat needs to be brushed at least once or twice a week to maintain its top condition. The ears though would need to be regularly checked to avoid infection.

During those days, only the royalty and the nobility can keep and breed the Portuguese Pointers. It was only in early 18th century that the lower classes of society were allowed to raise and use the dog for hunting. It was also in the 18th century when English families migrated to the region of Oporto and established wine production businesses. The breed was taken to England and was known to have an active part in the development of the English Pointer. In 19th century the number of Portuguese Pointers extremely decreased. Fortunately, in 1920s a number of breeders made a concerted effort to locate the remaining dogs to revive the breed. In 1932 the pedigree book of the Portuguese Pointer was established and in 1938 the breed standard was written.