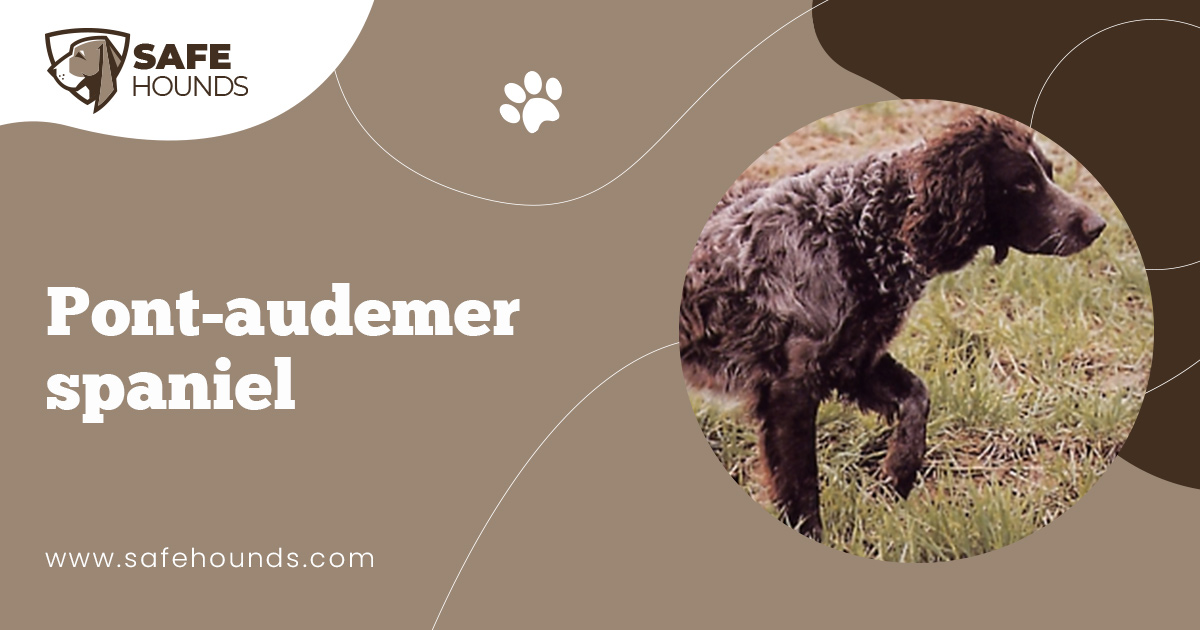 Le petit clown des marais refers to the Pont-Audemer Spaniel. This title that means the little clown of the marshes was given to this breed of gundog because of its happy and fun loving personality. Another reason for this title is because the dog has an extraordinary ability to hunt in marshes. This ability surpasses the hunting prowess of any other spaniel. A Pont-Audemer Spaniel is a medium sized breed of gundog with a distinctive long and wavy coat that can be liver colored, brown or a mixture of white, liver and brown. This breed is included in the vast family of spaniels that originates in France. The other French Spaniels are the Picardy Spaniel, the Blue Picardy Spaniel, the Brittany and the French Spaniel.

The Pont-Audemer Spaniel like the other breeds possesses the characteristic traits typical to a spaniel. This breed is also an outstanding hunter, has an affectionate and gentle nature that makes it a wonderful home companion. This breed however is rarely kept solely as a pet as a Pont-Audemer Spaniel was born to work. The dog is hardy, vigorous and tough, well able to withstand adverse weather conditions. This is a versatile breed. A Pont-Audemer is a firm pointer, a tenacious tracker and a skilled retriever. This breed is well adept at flushing. Heavy vegetation will not deter this dog from flushing the game. However, this breed will be on its element in water. Its as if the dog was born specifically to hunt ducks and other water fowls. This is probably the reason why the dog was described as a water work specialist. This specialization has a down side too. Through the years, the population of this breed has continued to decline. European hunters have favored all purpose hunting dogs. The situation worsened when foreign breeds of dogs began coming to the French shores.

This small sporting dog from southern France is an exceptional swamp hunter but this breed can also work the mountains and the fields. Energetic while hunting, this dog is known to be quiet and calm at home. These dogs are commonly kept as house companions these days not only because of the dogs elegant appearance but also because of its gentle and affectionate nature.

The Pont-Audemer Spaniel is a compact, stocky, energetic and vigorous dog. It has a round skull that is topped with a very curly topknot. The topknot is well placed leaving the dogs forehead bare. The muzzle is long and arching in the middle. Slightly let down lips make the muzzle appear rather pointed. The small eyes that can be dark amber or hazel in color have a frank though gentle expression. The flat pendant ears are covered with silky and long curly hair. With the topknot and the well furnished ears, the dog appears to be wearing a beautiful curly wig.

This breed has a straight back, a rather short but muscular loin and a broad chest that reach the level of the elbows. The tail that is usually docked to one third of the original length has a thick base and well covered with curly hair. The happy temperament of this dog is shown by the constantly wagging tail. A Pont-Audemer Spaniel has a curly and slightly ruffled hair that can be brown, grayish chestnut. Glinting dead leaf colored highlights enhances the beautiful appearance of the coat. This rich shiny hair is smooth and shorter on the face, curly on the rest of the body and longer around the neck forming a lustrous mane when it catches the light. These admirable curling locks helps the dog withstand the cold.

A Pont-Audemer Spaniel was bred primarily to be excellent gundogs. Because of this, the breed has strong work ethics. These dogs are most commonly used as working dogs. However, this does not mean that this breed will not make suitable pets and home companions. A Pont-Audemer Spaniel possesses the characteristics typical to a spaniel. These dogs are loyal and affectionate to the human family but they tend to form a strong attachment to the people who feed and care for them. This breed craves human companionship. Consequently, a Pont-Audemer Spaniel is generally good with children in fact the dog makes a wonderful playmate. These are comical dogs. Its antics would surely amuse and entertain the kids and the older members of the family.

A Pont-Audemer Spaniel is generally good with dogs in the household but may show combativeness with other dogs. Being a hunting breed, this dog will have the tendency to chase smaller pets. These unwanted traits can be curbed with proper socialization and obedience training. Training will not be a problem as these dogs have a high trainability. Always eager to please, a Pont-Audemer Spaniel will respond well to positive training methods.

These dogs would thrive well in a rural environment but they can adapt to city living as long as they are sufficiently exercised everyday. In its country of origin, this breed was primarily developed to work. Prospective owners of this breed should make sure that ample space will be provided where the dog can exercise daily. This is one of the breeds that get destructive when bored. A Pont-Audemer Spaniel that is not given the chance to expend its excess energies will become problematic with the owners.

A Pont-Audemer Spaniel is a working breed. These dogs have evolved into home companions but this breed is rarely shown by the owners. As such, a comb or a brush used once a week will be sufficient to maintain the good condition of the shiny wavy hair. A Pont-Audemerr Spaniel, especially a housebound one will rarely need baths. However, a dog that was taken on a hunting trip may need a bath to remove the mud and dirt that clings to the coat. The ears must be checked and cleaned as well.

The Pont-Audemer Spaniel is an excellent hunting dog whose prowess in working the marshes is legendary. Although this breed is considered to be a fine pointing dog, the real expertise of the Pont-Audemer Spaniel is to work the marshes for ducks. This fact was substantiated when the dog was dubbed as the le petit clown des marais or little clown of the marshes. This breed was widely accepted in its native Normandy and Picardy districts. However, the breed has not gained prominence in other areas of France much less in other countries. The breeds population has never been that big and when English dogs entered French soil, further deteriorated the popularity of the breed. The specialization of the breed has somehow affected its existence. European hunters have favored general purpose dogs while French hunters were indifferent to the fate of the breed.

The First World War had a damaging effect to the breed. The breeding stock was drastically reduced. The breed was on the brink of extinction and only a few specimens survived. The Second World War, a mere 22 years later further reduced the number. To save the breed it became necessary to crossbreed the remaining Pont-Audemer Spaniels with the Irish Water Spaniels. This happened during the 1950s. In spite of the cross breeding less than 100 registrations were made per year. The breeds number continued to decline. The situation was not helped when problems surfaced as a result of inbreeding. It was fortunate that the Society Havraise has undertaken the revival of the breed. A club that represents the Pont Audemer Spaniel, the Picardy Spaniel and the Blue Picardy Spaniel has joined in the revival of the breed.