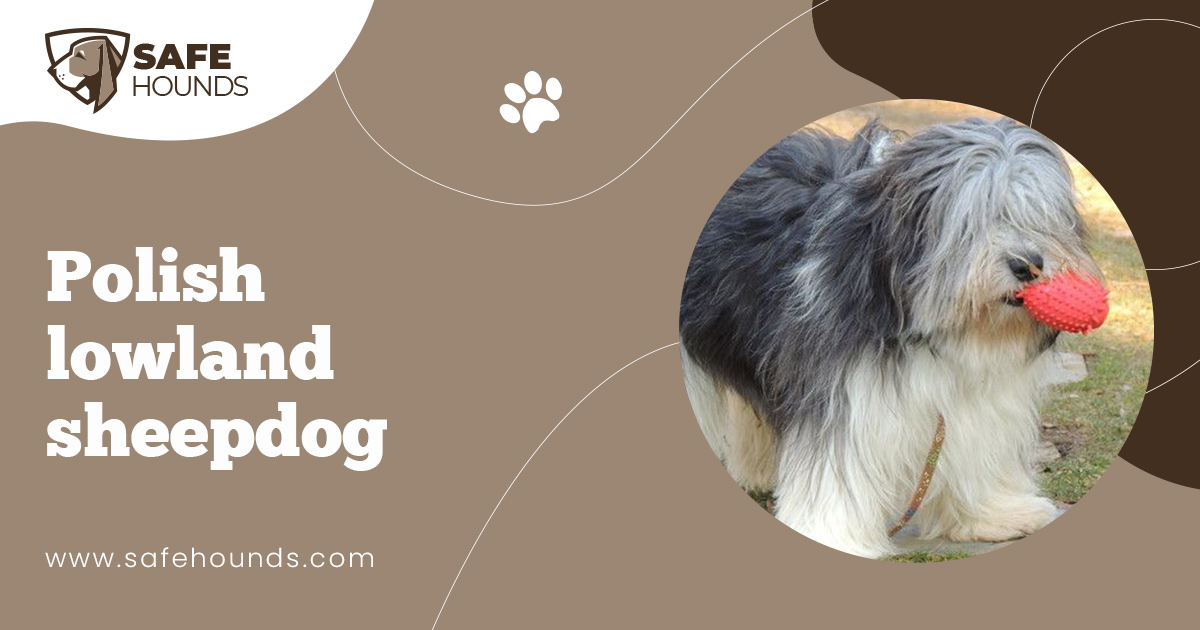 The Polish Lowland Sheepdog is better known as a PON, which means Polski Owczarek Nizinny in Polish. This dog belongs to the herding group. They have many of the same traits as the smaller sheepdog. They have the smooth trot, a strong protective coat, and are very loyal. They have strong herding instincts and are very leery of strangers because they think of you as his family and he will protect until he knows you are safe. When they mark their territory and someone or something crosses it, he will know. They are a very independent breed.

This breed is also known for his remarkable memory. When you start to train him, he will not forget, but you will need to be firm with him as he is very bullheaded. This has to be started from a very young age or he will take over.

They are very muscular, strong, and their coats are very long and thick. Much of the facial hair will fall over the face covering his eyes. However, do not let that fool you. He sees everything. Their herding skills are honed to please their masters. These dogs are also very clever. If he finds himself in a predicament, he will find a fast way out of it.

When you buy one, if it is not to be used for herding and just as a family pet, you will want to keep it in a fenced in yard. His herding instincts will take over and he will run.

Polish Lowland Sheepdogs have very long hair that is very thick with a soft undercoat. It is usually straight, but some can be a bit wavy. The most common colors of coat are the white with black, gray, or sandy patches or grey with white or chocolate patches. This breed is considered a non-shedder so if you want a dog and no worries with hair all over the place, then this is the dog for you.

The males usually weigh 40 to 50 pounds and stand 18 to 20 inches while the female are around 35 to 50 pounds and stand at 17 to 19 inches. Their tails are usually docked, so it is short and stumpy looking. If not docked, the tail will be very long and furry. The tail is carried up over the back, but not curled or laying on the back.

Their skin is tight with no hanging or wrinkles to it. Their bodies should be well muscled and have a smooth walk or trot. He covers ground quickly. Their eyes are usually dark and medium sized. Ears are heart shaped, drop down, and are never held erect. Their bite should be a scissor bite and level. They should have a large black or brown nose.

You will have to remember this breed is very dominant because of his herding. He wants to protect you as if you are his herd. They get along well with children and other animals if taught early on.

They usually do not bark unless someone is there or something startles them. They do not make great apartment dogs because they need exercise and if they do not get it, they will become destructive. So, if you want one for your apartment then be prepared to take it on a lot of walks or playing in the back yard.

They are very friendly once they get to know you. At first, they will be guarded until they know you are not going to hurt their family. They have a wonderful personality and you will have hours of enjoyment from this breed, if it is the one for you. They are very loyal and you can be assured, he will protect your family.

You will have to have time to take care of the coat on this breed. They have a long dense non-shedding coat, but it has to be brushed daily to keep it that way. The long coats tend to matt very easy if not taken care of. They will get dirty, especially around the backend, so keep it trimmed on the back area. You will want to use a pin brush in order to get the under coat which will help in keeping down the mats or knots. You will have to start grooming them at a young age because they do not like to be groomed. They would rather run around dirty and not worry about anything to do with brushing. If they are not used to being groomed and they do get mats then you will have a difficult time getting them out.

Have them vet checked and up to date on shots and teeth care. You can give them chew bones that reduce tartar on the teeth, which will promote healthy gums.

It is believed that the Polish Lowland Sheepdog is a descendant of the Puli, the Huns herding dog. This breed started back in the 16th century in Poland and Germany. In the early 1500, a ship brought some grain to Scotland to exchange for some sheep and on board was some PONs. These pons were used to herd the sheep. One Shepard asked for a pair of PONS and exchanged it for a ram. He received two females and one male.

These dogs are also believed to be descendants from the Tibetan mastiff and the Lhasa Apso. No one is sure of exactly where or how they came to America.

The lowland was given this name because of the herding work they did in the lowlands of Poland. After World War 2, the breed was almost extinct. Many breeders considered this PON to be a link between the ancient corded Asian Herding dogs that were brought from Europe over 1000 years ago and the more recent shaggy herders such as the bearded Collie and the Dutch Schapendoes.

The lowland was revived by Polish breeders after the war with diligence. The Polish Lowland Sheepdog is now generally kept as a house pet, but it can still herd. We are seeing more and more of them used as rescue dogs and therapy dogs. Many people have even tried to have them as guide dogs, but they think because of the long hair over their eyes that they too cannot see. This is untrue. They have a keen sense of knowing where they are and what is around them at all times. There are some that have been trained for this service and they do much better than some of the other breeds. These dogs are still being sold as herders as their main objective. The rescues are getting some of these in after they are done being used as herders and they are no longer needed. Overall, the Polish Lowland Sheepdog makes excellent family pets.