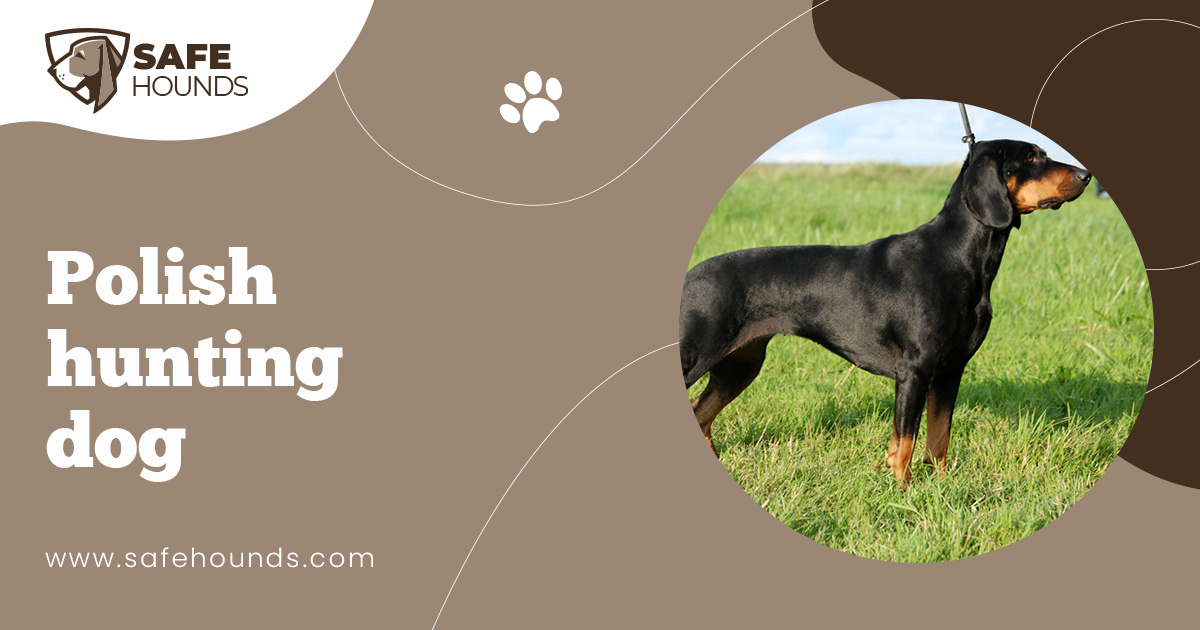 A breed of scent hound that is used to hunt boar and deer in Poland, one that is held in the highest regard by Polish nobility, a protector, a devoted faithful friend and a pet that does not require tedious extensive maintenance and care  the Polish Hunting Dog.

The Polish Hunting Dog has existed since the 13th century. This breed is noted for its superior scenting ability, a trait that was most valued by hunting enthusiasts. This breed has been the constant hunting companion of Poland nobility. Poland is considered to be a hunters paradise. Forests in this country are a veritable source of small and big game. A scent hound is considered to be a very important backup of a hunter. The mountains on the eastern regions of Poland have difficult terrain. The Polish Hunting Dog is a nimble and sure footed dog that can easily scale and traverse any type of terrain. Other hunting dogs would baulk at these dangerous grounds but not a Polish Hunting Dog as this breed is a keen hunter and one that has a natural enthusiasm to work. This is an extremely agile dog and noted for having the aptitude to undertake difficult working conditions. A Polish Hunting dog thrives on challenges. It would not be surprising to see this dog chase big predators or circle a large game and wait for the arrival of the human hunter.

A Polish Hunting Dog is a dependable protector. This dog is not really aggressive but the massive build as well as the deep but melodious howl would intimidate an intruder. The dog is affectionate, docile and friendly to its human family but this gentle nature is not for people unrecognized by the dog. This courageous breed makes a fine guard dog. A Polish hunting Dog is wary of strangers. It would take a while for this dog to warm up to other people even to those accepted and allowed by the human family to enter the home.

Standing at approximately 23 inches and weighing about 55 pounds, a Polish Hunting Dog does not really have an imposing appearance. However this medium sized dog does have a compact and well constructed body that is strong and well suited to working in the harsh terrain of the mountainous regions of Poland.

This breed has a noble head that is proportionate to the body, a slightly convex muzzle that is of the same length as the skull. Nose color depends on the color of the coat. It can be brown, black or flesh colored. Oblique medium sized eyes have a kind expression. Eye color varies from dog to dog. Dogs with black and tan coats have dark eyes. Brown and red coated individuals have lighter colored eyes. A Polish Hunting Dog has well fitted eyelids making the white of the eye quite unnoticeable. Hanging triangular ears are medium in length, broad at the base with well rounded tips. The ears are covered with smooth silky hair.

This breed of hunting dog has a double coat, an abundant undercoat that grows thicker during the winter months and a harsh topcoat that lies closely to the skin. Hair on the head and ears are short and soft. Coat colors are black and tan, red and brown and tan. A Polish Hunting dog would usually have tan markings over the eyes, on the muzzle and on the front of the neck. The forechest as well as the lower part of the limbs would have tan markings. Hair on the underside of the tail is tan in color. Some specimens have small white markings on the chest and on the toes.

The well muscled medium length neck of this dog slopes moderately. Skin on the neck is loose but no dewlap is formed. This dog has well defined withers, a muscular straight back as well as a broad slightly arched loin. Deep chest reach the level of the elbows. Ribs are long and oblique. This breed has a slightly tucked up belly. Hair that densely covers the long tail forms a small brush. Saber- like tail is carried low when the dog is at rest and carried higher than the topline when the dog is on the move.

Undoubtedly, a Polish Hunting Dog is blessed with impressive appearance. However, another beauty of this breed lies in the way the dog moves. The gait is effortless and energetic and when the dog does trot the harmonious fluid motion is truly an entrancing sight.

The Polish Hunting Dog is an intelligent breed that has an innate eagerness to please attitude. Training this breed would be easy especially if positive training methods are used. This energetic dog would be a suitable companion for a person with an active lifestyle. The Polish Hunting dog would be a suitable companion for long walks, cycling, jogging or horse riding. This dog would be ecstatic if taken on trekking trips. This breed will not be defeated by obstacles like difficult terrain or muddy water. A polish Hunting Dog will not hesitate to get its feet wet in fact this breed really enjoys the water.

A Polish Hunting Dog makes a wonderful family companion. Unlike other breeds that can be compared to a bull let out inside a china shop, this breed is well behaved, calm and quiet inside the home. This dog is affectionate to the human family and would prefer to be included in all the activities if the family. This breed that likes to play catch ball and Frisbee would be a wonderful playmate of the children. A Polish Hunting Dog is friendly but only to the people it recognizes. The dog makes a great guard dog as it is alert, wary of strangers as well as having a deep booming voice.

The dog may show dominance over other animals but can tolerate dogs and other pets if raised with them while still a puppy. Being relatively quiet and calm inside the house, this breed will do well in an apartment. However, this is an energetic and high spirited breed. If the dog will live in an apartment, the owner has to make sure that the pet is sufficiently exercised.

Another advantage for opting for this breed is that it would not require extensive care and maintenance. This breed is an average shedder. Brushing the coat regularly would remove dead hair and maintain the good condition of the coat and the skin. This breed has a weather resistant coat. Too frequent bathing should be avoided so as not to remove the waterproofing of the coat. Being hunting dogs, they have the propensity to get muddy, to have thorns between the foot pads and to have burrs clinging on the coat. Cleaning the ears, brushing the coat or bathing the dog (if necessary) must be done after the dog has gone hunting.

The Polish Hunting Dog also known as the Gonczy Polski has been in existence since the 13th century. During this era, hunting was already a favorite sport and scent hounds were referred to in Polands hunting literature. During those times (and even up till now) Poland is a country of deep forests. These forests are literally teeming with small and big game. Scent hounds particularly the Polish Hunting Dog have been the constant companion of Polish hunters. This breed of hunting dog was also the favorite of the Polish nobility. 14th century chronicles have attested to this fact. By the 17th century two types of Polish scent hounds have been recognized. Detailed descriptions of these two types of scent hounds were included in a 19th century hunting literature. Jan Szytier of Poradnik Mysliwych described the Polish scent hound and the Polish brach in 1819, W. Kozlowski described and made an illustration of both types of scent hounds in 1821. Another detailed description that can be used as the 1st breed standard was made by Ignacy Bogatynski. These descriptions depicts that the Polish brach is heavier than the Polish scent hound.

Attempts to standardize the breed began after the 2nd World War. In 1950, Josef Pawuslewicz, a famous cynologist in Poland have begun the extensive development of the breed by using Polish hounds from the southeast regions of Poland. In 1983 a valid standard for the Polish Hunting dog was finally created.