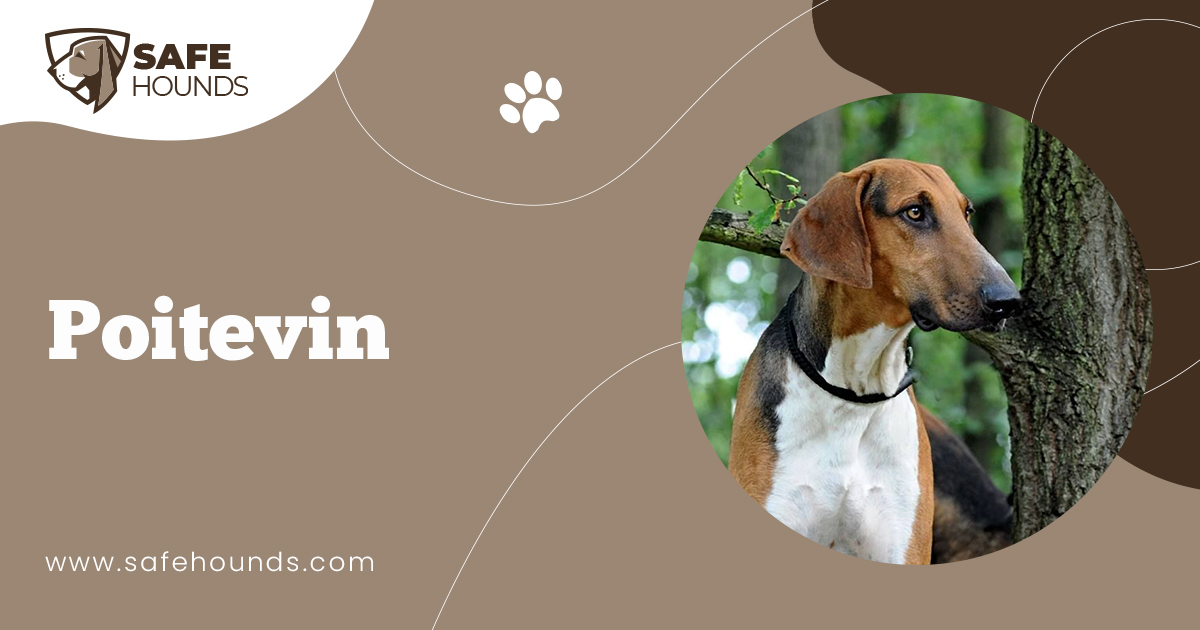 Present day Poitou, a province in the western coast of France boasts of idyllic villages, picturesque countryside dotted with vineyards and charming cottages amidst profusely growing wild flowers. During the 16th century, this very same area is considered to be wolf territory. Because of the big numbers of wolf population, a breed of dog was originally developed to hunt the wolves. The Poitevin Hound was developed from the now extinct Chien Ceris and from the legendary Montemboeuf by Marquis Francois de Larrye in 1692.

This outstanding wolf specialist was once called Haut Poitou. The name was changed to Poitevin Hound in 1957. The Poitevin Hound is a dog with a distinguished and elegant appearance. The short smooth glossy coat that comes in a wide range of attractive colors is made more appealing by the black saddle or by large black patches. This wolf hunter gallops and bounds easily and scales rough terrain. Never intimidated by brambles and heavy undergrowth, the Poitevin will tenaciously trail the prey even if means hunting from sunrise to sunrise. It is not is not surprising that this breed will be viewed by its fanciers as the best wolf hunter in the world.

The Poitevin may excel in wolf hunting, the dog is now utilized to hunt deer and hare. However, popularity of the breed is rather low. Unlike other hunting breeds that can be developed as house companions and pets, the Poitevin is not suited to be a family pet. This hardy dog is very energetic and full of stamina. Because of its excellent scenting ability and its passion to hunt, the dog would happily hunt all day. However, this dog would need a firm leader and would rather live with the pack than with a human family. Professional training is necessary for this breed as a Poitevin is in an independent breed and can be very hard to train. Owners or handlers that find the dog very difficult to handle often abandon the dog. This is probably the reason why quite a number of Poitevin Hounds end up in rescue centers.

The Poitevin has a distinguished and elegant stature. The dog may have a light build and a slender body but it is a strong and hardy breed. This medium sized hounds head is long but not vey wide. The rather flat skull slopes smoothly to the foreface. The long muzzle is slightly convex. This breed has a strong, wide and prominent nose. Strong jaws and the upper lip that covers the lower lip enclose strong teeth that meet in a scissor bite. The dogs medium length ears that are set on quite low are slightly turned wards. A Poitevins black rimmed large, round brown eyes have a lovely expression.

This breed has a long slim neck that should not have a dewlap. Dewlaps are considered as a breed fault. The dog weighs about 66 pounds and has a slender body that has a muscular and well coupled back. The loin is well muscled, the ribs are long, the chest is deep and the belly is well tucked up. The medium length tail is covered with fine smooth hair. Carried with a light curve, the tail adds to the elegant appearance of the dog. The Poitevin has straight and muscular forequarters and well developed hindquarters. The coat is short and glossy. Apart from the elegant and well constructed body, what makes the Poitevins appearance striking is the variety of fascinating coat colors. The dog may have a tricolored coat with a black saddle or an orange and white coat with black patches. A Poitevin may have a bi-colored coat (white and orange) .This breed of wolf hunter may also take the coat color of the wolf.

The Poitevin is a pack hound and like any other pack hounds, the dog would thrive in a kennel with other dogs rather than be with a human family. The dog is not suited for apartment living. This dog would not appreciate being left alone. As it is a very vocal breed, the incessant barking would certainly irritate neighbors. Moreover, a Poitevin has extensive exercise requirements. This is not a friendly dog. It is wary of strangers and known not to do well with small children. Being a pack hound, this dog would tolerate other dogs but because of a high prey drive they do have the tendency to chase smaller animals.

Poitevin is an easy dog to care for. The short coat would not require extensive grooming.

Regular brushing with a firm bristled brush would remove dead hair and distribute the natural oils of the coat. However because this breed is a hunter, one that hunts under thickets and brambles, an owner must ensure that the dog is rubbed down after it has gone hunting. This is to remove thorns and other dirt that may have been embedded on the coat and on the toes of the dog. Ear cleaning is also necessary as the longish and drooping ears can not be air dried. Ears must be cleaned regularly to prevent infections. This healthy breed has no known major health concerns and noted to be resistant to most canine diseases. Used to living in the open, these dogs would need adequate shelter in colder months. Life expectancy is from 11 to 12 years.

Poitou, a province in the western coast of France is situated above Saintonge, a former province of western France and below the Brittany and the Vendee regions. Poitou is a vast area of cereal and wine-growing plains and wooded valleys. In this marshy and coastal province of France, the large numbers of wolves is one of the major concerns of the French people in the area. The need for a courageous breed of dog that will hunt the wolves led to the development of the Poitevin. In 1692, Marquis Francois de Larrye of Poitou developed a breed of big and courageous dogs utilized to bring down wolf population.

The ancestors of this wolf specialist are the now extinct Chien Ceris and the Montemboeuf who in turn have descended from the legendary White Dog King (Chien Blanc du Roy). The Irish scenthound and the English greyhound have been used in the development of this breed as well. Later on the foxhound and the Saintongeois were added to the gene pool to further develop the strength, the stamina and the scenting ability of this breed that was then called Haut Poitou. These big courageous dogs that hunt in packs are noted for their remarkable scenting ability, for the courage and stamina. A Haut Poitou is tireless, well able to trail a prey from sunrise to sunrise. This agile dog is never intimidated by rough terrain, thickets and brambles. Breed followers enthuse that the Poitevin is the worlds greatest wolf hunter.

The French Revolution has greatly affected all breeds of dogs in the country. Most of the kennels were destroyed. The Haut Poitou was not spared and only a few packs managed to survive. The rabies outbreak in 1842 nearly wiped out the remaining packs. Only a dog and two bitches remained. These remaining dogs were used as the foundation for the restoration of the breed. Dedicated fanciers crossed the remaining specimens with foxhounds. The breed was revived and in 1957, the name was changed to Poitevin Hound. Interest for the breed was restored when the French Pack Hound Club was founded in 1977.

The Poitevin Hound is an outstanding wolf specialist. However, recognition of the breed is not widespread given that there is actually no need for its specialty. Presently, a few American hound fanciers imported some Poitevin. Because the Poitevin is now utilized to hunt hare and deer it is slowly gaining recognition.