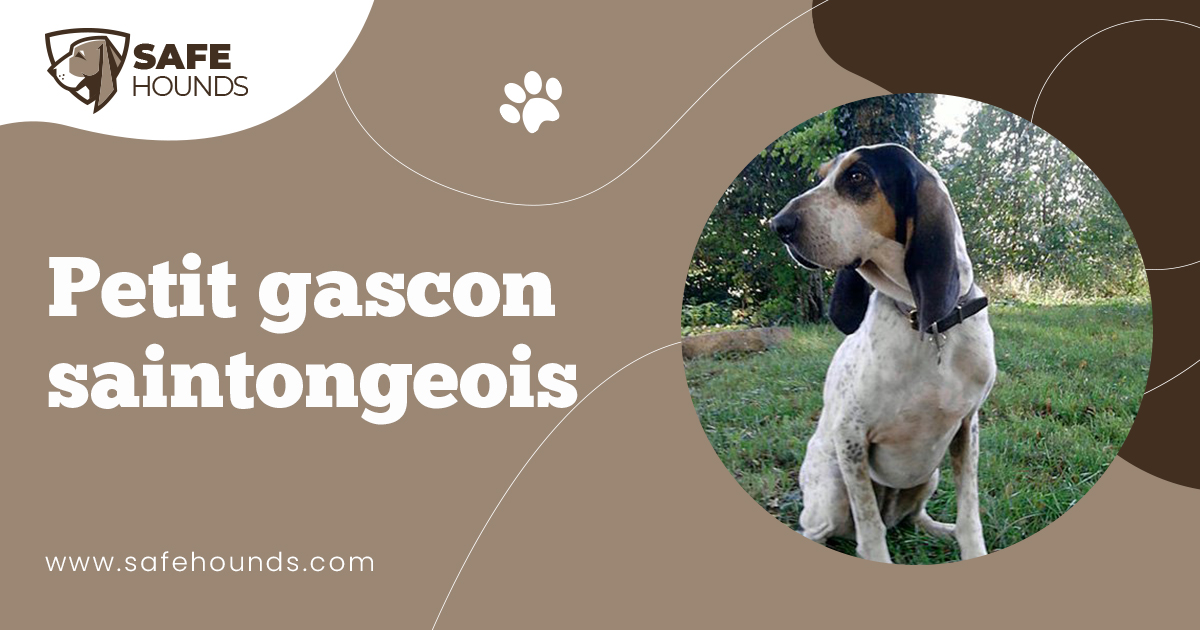 The Petite Gascon Saintongeois, a breed of hunting dog was created during the early 20th century by French breeders who wanted a smaller dog with the same excellent hunting prowess that the Grand Gascon Saintongeois have. The smallest specimens from a litter were selected and these dogs became the foundation of the Samll Gascon Saintongeois. This breed was developed in the southwestern coast of France specifically to hunt hare.

With an average height of 22 inches, the Petite Gascon Saintongeois is about six inches shorter that its cousin the Grand. This petite breed however, has all the outstanding hunting abilities of the bigger breed. This breed is par excellence. A Petite Gascon Saintongeois is very fast, has a superior scenting ability and a resonant deep melodious voice. Breeders wanting to develop a hare specialist really got what they were aiming for with this breed. These dogs are not only excellent hare hunters but they do have the reputation of being courageous and tenacious hunters of other big game. This dog will not allow a prey to escape and would not be intimidated to face and tackle a game that is several sizes bigger than its own size. A Small Gascone Saintongeois is a versatile dog, the perfect hunting companion for a person who belongs to a hunting group but at times would want to hunt on his own as this breed is an equally adept pack or individual hunter.

This breed that was primarily developed to be a specialist hunter has an admirable appearance. Most working dogs are valued for their hunting abilities and not for the physical appearance. If you have chosen to own this breed you will have both. This is the type of breed that you will be proud to parade in a dog park. This medium sized dog that has noble and distinguished appearance is friendly and valued for its well balanced temperament.

The Petite Gascon Saintongeois is a proportioned medium sized dog with a distinguished, powerful though elegant appearance. The muscular shoulder, the firm body, the slightly arched loin and the long deep chest with gently rounded ribs give the dog an impression of strength and endurance. A Petite Gascon Saintongeois on the move is quite a sight. This dog is extremely agile and very fast. The strong and well proportioned forequarters and hind quarters give the dog the strength and the power to make elastic leaps.

With the gentle and trusting expression of the brown oval shaped eyes it is apparent that this is a friendly and not an aggressive breed. The dogs black nose has well opened nostrils. The strong muzzle that is equal to the length of the skull has a slightly arched nasal bridge. The ears add to the distinct appearance of the dog. The ears are quite long, curled and reach the tip of the nose. Set at eye level and attached slightly backwards, the long ears hang down and leave the skull quite free. The medium length neck is rather thick ands shows a little dewlap. Long tail that reaches the point of the hock tapers to the tip. Set on high, the tail is elegantly carried saber fashion.

This breed has short but dense weather resistant coat that is basically white in color. The dog may be speckled or may have black markings. Black patches in both sides of the head are most common. These black markings usually cover the ears and surround the eyes. The cheeks are usually pale tan in color. Two tan markings above the eyes give the dogs a quatroeill appearance. Most dogs have the roe buck mark – a leaf brown colored marking at the base of the thigh.

The Petite Gascon Saintongeois is considered to be one of the rarest sporting breed of dogs in France. The breed is acclaimed for its excellence in hunting hare and other game. This breed though is known to have a calm and even temperament – qualities that make this dog one of the best home companions among other hunting breeds. This dog is extremely patient with children especially if the dog is introduced and allowed to play with the children from the time it is still a puppy. A petite is an intelligent breed. Training the dog will never be a problem as is it attentive and easy to teach. Moreover, this breed has an innate eagerness to please the master and would be amenable to commands. This friendly dog however, can be reserve and wary of strangers. Socialization is therefore necessary. Being accustomed to hunting in packs, this dog will tolerate other dogs but they should not be trusted with smaller pets. These dogs have the tendency to chase small pets because of a strong prey drive.

This dog would do well in a kennel where they can interact with other dogs. Being pack hunters, these dogs would be destructive if left alone. This breed should not be kept in an apartment. This high spirited and energetic breed will need a lot of physical activity.

The short coat of this breed requires very minimal grooming. An occasional brushing will suffice to maintain its good condition. The Petite Gascon Saintongeois though is a hunting breed and it would be necessary to clean the eyes and the ears after a hunting trip. The ears should be thoroughly cleaned to avoid infection.

The Grand Gascon Saintongeois from where the petite was created is the living descendant of the Saintongeois hounds that has existed for centuries in the Midi region of France. Unfortunately the Saintongeois hound, an outstanding breed of hunting dog is now extinct. The fall of the nobility after the French Revolution has made a great impact on the existence of this breed. Centuries ago, the hunting sport was a privilege granted only to the French nobility. Only the royalty were allowed to maintain and keep kennels of specialized hunting dogs. One of these breed is the Saintongeois Hounds. This breed became the favorite of the royalty because of its outstanding ability to hunt wolf. This breed though fell into disuse when the hunting privilege of the nobility was abolished after the French Revolution. The common French citizens that are now allowed to hunt can not afford the upkeep of kennels and shun the use of this breed. The breed was also weakened by inbreeding.

Count Joseph de Carayon Latour, aware of the plight of this outstanding breed had tried to regenerate the Saintongeois hound. By this time only a few specimens were left. A male and a female Saintongeois hounds owned by the Earl of Saint Legien was mated with the Grand Bleu de Gascone coming from the kennels of Baron de Ruble. From this cross breeding the Grand Gascon Saintongeois was created. This breed was commonly known as the Verilade Hound, Chateau Verilade being the place where the breed was developed.

Unlike the nobility that would usually use horses while hunting, the farmers and the common citizens of France that are now given the chance to hunt would do so on foot. A smaller hound that would be easier to follow is needed. Thus Petite Gascon Saintongeois was created. This breed may be smaller than its cousin the Grand Gascon Saintongeois but it has all the outstanding hunting capabilities of the bigger breed. This is an even tempered dog they are commonly raised as pets. Unfortunately, this breed is rarely seen outside its country of origin and efforts of breeders to revitalize the breed seem to be futile. The Small Gascone Saintongeois similar to the Grand Gascon is almost extinct.