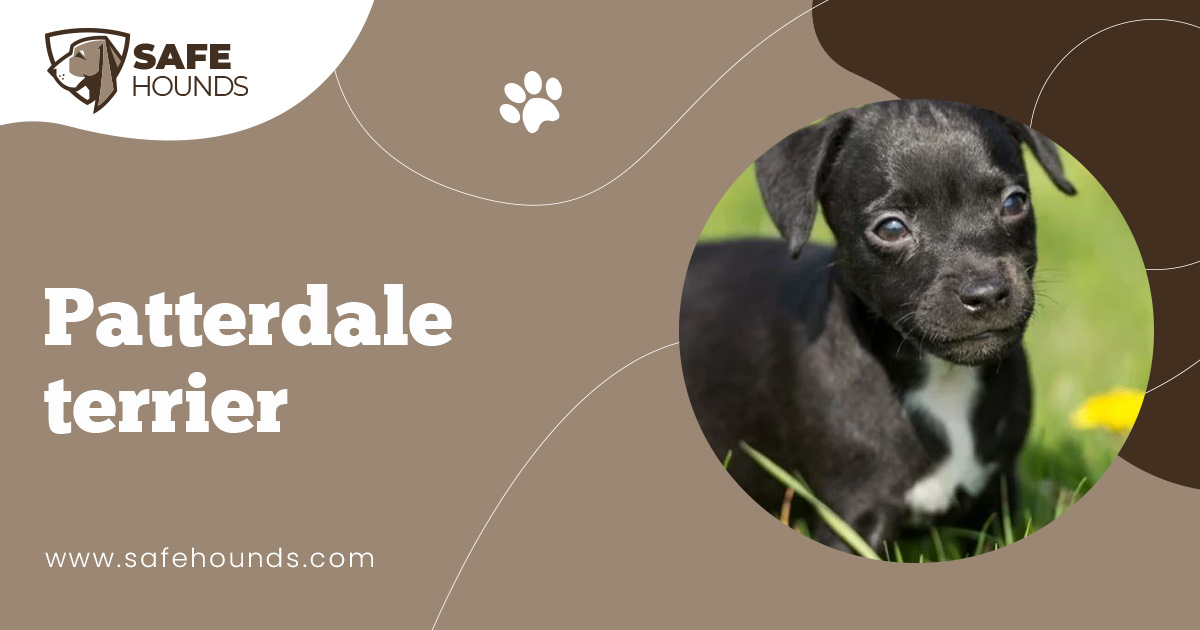 Several types of Fell Terriers were developed in the hilly country between northern England and southern Scotland. The Patterdale Terrier is one of these Fell Terriers. This dog breed native to the Northwest Englands Lake District of Cumbria was named after Patterdale, a small village south of Ullswater. The harsh environment of the fells developed the dogs into a tough as nails breed. This breed developed by Joe Bowman was further refined through selective breeding by Cyril Breay, Frank Buck and Brian Nuttal creating the Patterdale Terrier we have today.

The Patterdale Terrier is a working dog primarily developed to eradicate foxes and other predators that are the common concerns of sheep farmers. Breeders and owners are more concerned with the working ability of the breed. The outward appearance of the dogs or the chance of taking home rosettes has never been a consideration as the breed is rarely shown. This dog is small but it is a determined and tireless hunter. When it comes to hunting its quarry, this breed is definitely tougher than other breeds of terriers. However, the Patterdale Terrier may not be a wise choice for a hunter that enjoys the exhilarating sight of watching a dog chasing a bolting fox. Patterdale Terriers are accustomed to hunting in the fells north of England where foxes are afforded protection by the scree and rocky crevices thus the dog would kill the fox at once rather than allow it to bolt. The Patterdale Terrier is not recognized by the UK Kennel Club however, breeders are ensuring the survival of this breed that has been and still is filling the need for a tough terrier type that has the ability to scramble to steep cliffs to extricate foxes from rock crevices and to maintain the low population of these predators.

A Patterdale Terrier is a small working dog that stands from 10 to 12 inches and weighs between 10 to 13 pounds. This breed has three coat variations. A Patterdale Terrier can have a smooth short coat that is uniform in length, a coarse broken coat that grows longer on the body but shorter on the head and ears and a rough coarse long coat that covers the entire body, head, face and legs. Black and tan, black, red and chocolate are the only acceptable coat colors for this breed although some individuals may have white hair on the chest and feet. Variations on the primary coat colors can also be seen such as lighter colored undercoat for black coats, dark or lighter chocolate and tan to deep red color for red coated specimens.

This breed has a strong and powerful wedge or trapezoid shaped head. Muzzle that is of the same length as the skull should not be snippy. Strong white teeth meet in a level or scissor bite. Eyes that are neither bulging nor protruding are set squarely and firmly wide apart. Eye color should complement coat color. The nose is commonly black though individuals with chocolate colored coats will have brown or liver colored noses. Small to medium sized, the triangular ears fold tightly against the skull with the tips pointing to the outside corner of the eyes.

The dogs muscular, clean neck is moderate in length and widens gradually from the nape to blend smoothly into the sloping well laid back shoulders. This breed has a slightly longer than tall body. Back that is moderate in length smoothly blends into the slightly arched muscular loins. A Patterdale Terrier is a tough working dog. This breed is an outstanding fox hunter because its hand spanned chest enables the dog to follow its quarry between rock crevices and through small tunnels. The dog has a slightly tucked up belly and strong well boned legs. Strong but not too thick tail is high set but not carried over the back. If the tail is docked, only ½ or ¾ of the tail must be removed as the tail is the only means by which the dog can be pulled out of the foxs burrow.

The Patterdale Terrier has gained the reputation of being tough excellent hunters. The dog is full of fire when hunting. However, owners of this breed have proven that the dog has the desirable traits of an ideal companion. This breed works hard and plays hard as well. Their immense stamina allows the dog to hunt all day and still be the lively playmate of the older children when it comes home. The dog gives its people unquestionable loyalty. A Patterdale Terrier is so affectionate so that it can get jealous and sulk in a corner if its master showed attention to other pets. The dog is highly intelligent but because of a stubborn streak, training can prove to be difficult. A hunter usually takes three to four of these dogs to hunt thus, a Patterdale is accustomed to working with other dogs. This terrier though has a high prey drive and can be extremely dangerous around smaller pets. Once the dog sees a bolting bundle of fur, the chase will be on. The dog is inactive indoors. This terrier would commonly curl up in corners or in the couch sleeping the day away or would quietly follow its master around. This is not a yappy breed but it is not recommended for apartment living. A Patterdale Terrier is first and foremost a working breed. It would need physical exercise to maintain its physique and mental activities to keep the dog occupied. Once bored, this dog will be very destructive. Remember, this breed is an excellent digger. The dog can easily make a tunnel to be on the other side of the fence.

Patterdale Terriers are valued for their working abilities. The smooth and short coated variety may not even need any type of grooming as this type of coat naturally repels dirt. Broken coated individuals may need occasional brushing to tidy the longer hair on the dogs body. A rough coated Patterdale Terrier would need the most maintenance although the coarse longer hair is not shed. This coat type would require plucking or stripping to maintain the hairs bristly appearance.

The Lake District of northern England is a unique area of beautiful bare hills called fells where the terrain is rugged and the weather harsh. On these steep, rocky, cold, wet and windy fells, several breeds of dogs generally called Fell terriers were developed. Sheep farming is the main livelihood in these remote farms. Since fox predation is the most common concern of sheep farmers, fox hound hunts are customarily organized. The steep fells would be rough on horses. Only the toughest terriers can cope with the all day hunting in the rugged terrain and under harsh weather conditions. Terriers in these northern areas are considered to be tougher than their cousins in the south. Dirt dens of foxes would be easy digs for the dog but the north of England is too rocky and the den can be too deep. Thus a Fell terrier has to dispatch the fox as soon as it is found. The Border Terrier, Lakeland Terrier, Scorrier Terrier, the Patterdale Terrier are only some of the Fell terrier types acclaimed for their hunting abilities.

In the early 1950s, the terrier developed by Joe Bowman was popularized by Cyril Breay, a Border terrier breeder of Kirkby Lonsdale and Frank Buck of Leyburn, Yorkshire. Through the selective breeding efforts of these two breeders, the Patterdale Terrier was further developed as a distinct breed. In 1960s, Brian Nuttal started breeding Patterdale Terrier obtained from the Breay and Buck lines. Dogs developed from the Nuttal bloodlines command higher prices as they are considered to be of superior quality. In 1978, the Patterdale Terrier was brought to USA where the dogs are utilized to hunt wild boar, fox, raccoon badger and other furred prey.