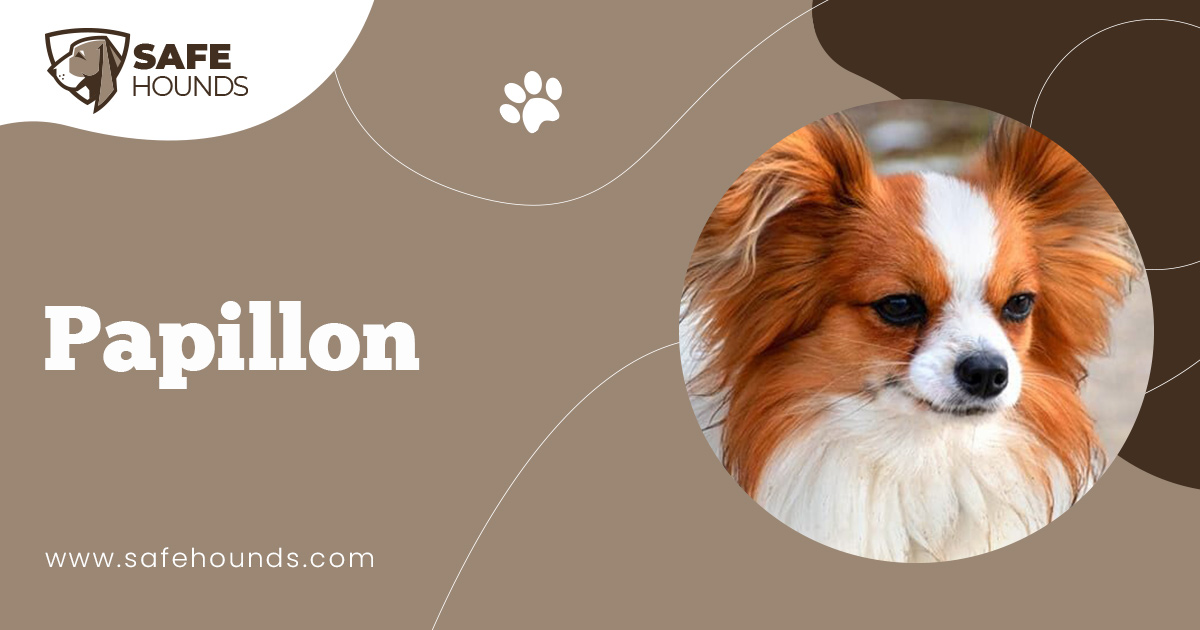 The Papillon is a toy breed of dog that is sure to bring a smile to your face as soon as you see this adorable little doggie. He is known not only for his unique and distinstive look but for his adorable nature.

The Papillon received the name meaning butterfly in French from the shape of his ears which can either be erect resembling butterfly wings or Phalene, which is French for night moth in which the ears will be dropped.

The Papillon is a loyal and friendly breed that enjoys the company of his family, but does enjoy quite a bit of activity. He is not the type of dog to lie around and do nothing, but that does not mean he wants to be outdoors, he just wants to be included. He is the perfect size to take along with you and enjoy the trip.

The Papillon is 8 to 11 inches tall from the withers with the body being just a bit longer than the height. They should weigh around three to nine pounds.

Of course, the most distinctive part of their appearance is their ears. The ears are quite large for such a small dog, which are fringed with colored silky hair. The color of the ears cover both eyes and the front and back of the ears to create the butterfly resemblance. Normally a white blaze and noseband on the face separates the colors of the eyes and ears to form the butterfly imagery.

Their beautiful coat is long, silky, flowing and straight with no undercoat. The Papillion has a plentiful frill on his chest. The hair on the skull, muzzle, forelegs, and hind legs is short except for the back of the hind legs, which has long feathered hair. The tail has a magnificent flowing plume, with short hair on the feet. The coat color is always parti-colored with patches of any color. In most cases, the coat color can be pale lemon and white to shades of red, chestnut, and mahogany with a white background. The nose, eye rims, and lips should be black.

There head is small like you would expect with a toy breed and is of medium width with a slightly rounding between the ears. The stop is well defined where it joins the skull. The muzzle is fine, is thinner than the head, and tapers to the nose. The length of the muzzle is about 1/3 the length of the head. The nose is always black, small, rounded and just a tad flat on top. You should not see the tongue with the mouth is closed and the teeth should meet in a scissor bite.

You may hear from Papillon owners that this is a big dog in a toy body. Because of their tiny size, many people do not believe these dogs have the endurance to go for long hikes, however, many have been known to outlast a five-mile hike.

The Papillon is friendly, charming, affectionate, and lively. They love going outside and running around and being playful, however, they also enjoy their quiet time. You will also see they are patient, calm, gentle, and of course dignified.

Barking is not really in their nature, but will bark at strange noises. They are very obedient, loyal, and can be trained quite easily.

Because of their size, apartment life and city life is fine, however, living in an apartment they may bark at every sound they hear.

As for exercise, they do not require much. They can normally receive enough by just running around the house, however, they do love to go out and play.

Even though the Papillon is a clean and odorless breed, he will still need a good amount of grooming. His long coat should be brushed daily to keep mats away. The nails should be clipped on a regular basis as well as his teeth. This breed has a tendency to accumulate tartar.

The Papillon is one of the oldest toy breeds, which can be traced back through history in works of art. Some believe the Papillon was developed from a type of Bichon, which was crossed with smaller spaniels. The origin of the breed is considered to be England, France, and Belgium by the CFI standards. The Papillon resembles the toy spaniels found in Italy in paintings such as the Venus of Urbino in 1542.

Throughout history, you can find these adorable dogs depicted by famous artists such as Watteau, Gonzalez Coques, Fragonard, Rubens, Van Dyke, Rembrandt, Fragonard and Mignard. You will even notice a Papillon in the family portrait of Louis XIV. Not only were these dogs seen throughout paintings but various royal family and merchant class family portraits. Therefore, you can tell they were treated more as a family member than as a pet. The origin of the breed is considered to be England, France, and Belgium.

At the beginning of the breed, it was called epagneul nain, which means dwarf spaniel. At that time, he had ears similar to that of a spaniel, which were dropped instead of erect. Later he became known as the continental Toy Spaniel. Most information concerning the Papillon is derived from the various paintings during the Renaissance and the family portraits.

The Papillon finally found its way to the United States in the 19th century with the erect ear type being seen more often. The first time a Papillon was seen in exhibition was in Britain in 1923 and was placed under the title of Foreign Dogs. The United States recognized the Papillon in 1935.

Today, the Papillon is still considered a wonderful show dog as well as a loyal family pet, however, he has been noted for other talents, which include agility, competitive obedience, performing tricks, and watchdogging.