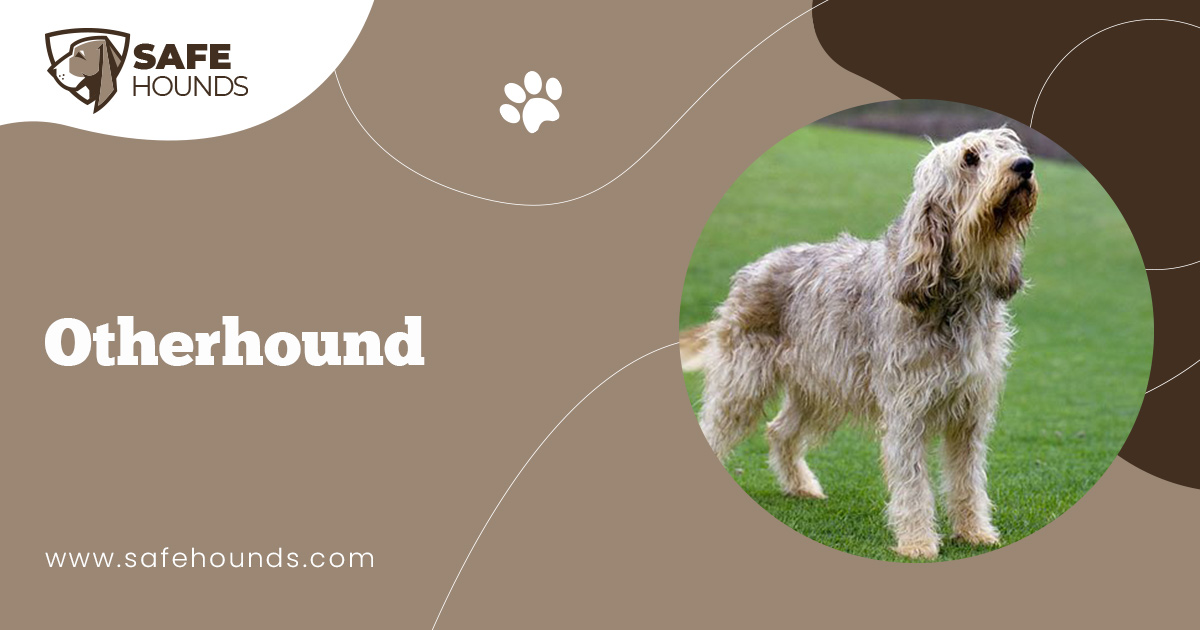 The Otterhound is a British dog breed that has ancestry in the Bloodhound line with one ancestor being the Airedale Terrier. Many love these dogs, as they can be very comical while also at times looking very noble. Even though they have the appearance of nobility, they are fun loving and amusing.

Even though the Otterhound does love their master and their family they do put them on a pedestal. He will be very happy to see you when you first come home, however, that is about it, then he will go his own way such as taking a nap in his favorite spot.

Otterhounds were of course, used to hunt otters but the sport along with the breed have never been very popular. On the other hand, you can find paintings of dogs believed to be Otterhounds in various paintings by artists such as Walter Hunt, John Sargent, Maud Earl, and Louis Agassiz Fuertes, and Samuel Howitt from the late 1700s through the 1920s.

The coat of the Otterhound is rough with a wooly undercoat with the outer coat ranging from 2 to 6 inches, which is oily. Coat colors for the Otterhound varies, however, it usually comes in grizzle or wheaten with black markings. In many cases, the coat will lighten, as the dog grows older to a light blonde with an ash blonde saddle. The thick wooly undercoat helps protect the Otterhound from cold and wet weather. Their bodies are long and strong to help them perform long hours of hard work.

The Otterhound is known as a comedian more from their shaggy face and busy eyebrows than just their unique personality. They have a muscular neck with an abundant dewlap. Their eyes are always dark with rosy conjunctiva. With eye color and eye rim complimenting the color of the coat. They have very long low hanging ears. The tail should be long and curves up over the back similar to a saber. The lips should be pendant shaped and thick.

The Otterhounds head is similar to a bloodhound, which is large, deep, and wide. The head should only be domed slightly and covered very well with hair. The muzzle is square with powerful and deep flews.

The are similar in ways to other pack hounds in that they have webbed feet, which makes them great swimmers. The Otterhound has thick deep pads with arched toes, which helps them in all types of terrain to romp, play, or hunt.

If you are looking for that perfect big dog with a great personality then you have found the one of your dreams. The Otterhound is good-natured, energetic and calm even though they are not as loving as one might like. They will of course know you are master and give you a bit of attention in the morning or when you come in for the day, but the rest of the time, he or she would rather be off doing their own thing.

Normally the Otterhound does well with other animals especially if raised around them. Otterhounds have been known to get along well with cats, horses, parrots, pigs, and dogs of all breeds. Pretty much anyone or any animals that are in their pack are acceptable. He enjoys playing by himself and is a joy to watch.

Otterhounds are not happy indoors and will live a pretty inactive life. They need plenty of room to romp and play so a large fenced yard would be best if you desire to keep your Otterhound happy. With their warm double coat, they do well outdoors in cool weather but do need to be watched in warm climates.

The Otterhound needs lots of daily exercise such as running, walking on a leash, and if at all possible find him a place to swim.

You should brush the Otterhounds coat at least once per week or more often to prevent matting. The beard may need washed, as it loves to catch food. He will need his toenails trimmed monthly. The ears should be checked more often than bathing along with brushing their teeth.

The Otterhound has never been a breed of dog that is over abundant, a mater of fact it has been listed as the most endangered dog breed in Britain after only 51 were born in this country in 2006. It is considered to be more endangered than the Giant Panda.

The Otterhound is an old breed coming to us from Britain where they crossed the Bloodhound with rough-haired Terriers such as the Griffons and Harriers. The reason otter is part of the name is of course from their favorite prey. The Otterhounds were used in packs to control the otter population. Fishermen of the time were in competition with the otters for the trout found in rivers.

During hunting season in the 1800s there were over 12 packs operating in Britain. The Otterhound has a keen sense of smell that is remarkable in that they can tell if a otter had passed by the way the night before, thus the reason they were so popular.

The 20th century brought a decline in the popularity of the Otterhound due to the fact the population of otters had declined. In 1978, otters became a protected species, thus the need of Otterhounds for hunting was totally unnecessary. This brought about a change in the breed whereas breeders that loved the Otterhound began to breed the dog and put it in the show ring. However, because of its swimming ability some hunters began to use the Otterhound for hunting such prey as bear, raccoon, and mink. Their sense of smell also made them great for drag-hunting and searching.

The United States saw their first Otterhound in the early 20th century with six Otterhounds seen at an AKC show in 1907. In 1937, Dr. Hugh Mouat started a breeding program, which in 1941 produced the first AKC champions.