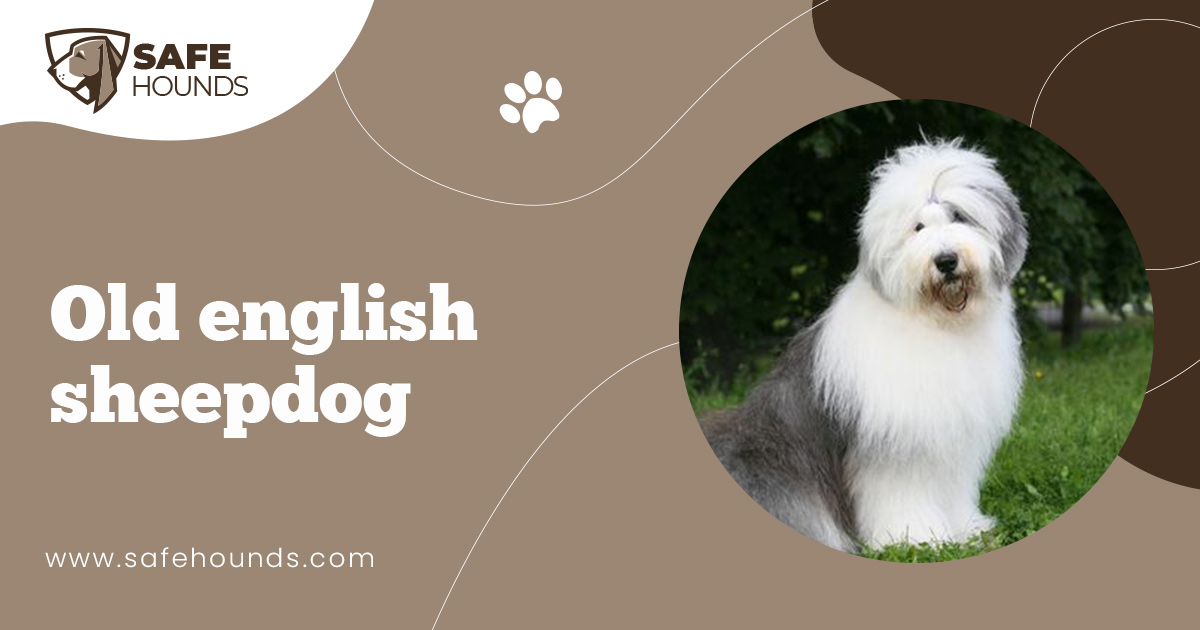 The Old English Sheepdog is an agile, large, and squarely proportioned dog with a long, but not excessive, shaggy coat. This sheepdogs body is a well-balanced, stocky, and muscular type dog with a topline that slopes upward from the withers to the loin. This unusual topline is a very important Breen characteristic. His body is rather short and compact, while his rump is broader than at its shoulders.

The Old English Sheepdog has a broad chest and a deep brisket with its forelegs, straight and small, pointing directly forward, it is neither slab-sided nor barrel-chested. It has a large rather square head that is covered in hair and has a well-defined stop. Its medium sized ears are carried down the side of the head, and its eyes are usually blue or brown, sometimes one of each. It has a long black nose, and the teeth meet in a level or tight scissors bite.

The breed is usually born tailless, such as the bobtail, or the tail is completely amputated. The Old English Sheepdog has a long double coat with coarse guard hair and a soft downy undercoat, thus insulating the dog. Usually the coat colors are gray, blue, blue-gray, or blue-merle, often the coat also has little white markings on it. Alot of times the white is the predominate color, with marking from the above darker colors. The Old English Sheepdog has a rolling, bear-like gait and a distinctive low-pitched, loud-ringing bark.

The Old English Sheepdog has a profuse body frame, but not so excessive as to give the impression of the dog being very fat, the coat also has a good hard texture to it, it is shaggy and free from curl. Quality and texture of a coat is to be considered above mere profuseness, softness or flatness of a coat to be considered a fault. The undercoat is a waterproof pile if not removed by grooming or season. Ears are coated moderately. The skull, neck, and forelegs are well coated. The Old English Sheepdogs hams are densely coated with a thick long jacket in excess of any other part. Neither the natural texture nor the natural outline should be changed by any artificial means, with the exception that the feet and rear may be trimmed for cleanliness.

He is round and muscular with well let down hocks. When the Old English Sheepdog is standing, the metatarsus is perpendicular to the ground when viewed from any angle. Its shoulders are well laid back and narrow at the points, the forelegs dead straight with plenty of bone.

The measurements from the withers to its elbow and from the elbow down to the ground are practically the same. Its loin is very stout and gently arched. It stands lower at the withers than the loin with no indication of softness or weakness. The attention is particularly called to this breed, is the topline. It is fairly long, truncated, and square. The parts over the eyes, supra-orbital ridges, are well arched.

This breed is funny, social, intelligent, and very adaptable. Although, on first impressions they might seem not to be all that intelligent. The Old English Sheepdog generally gets along with children, other dogs, other pets, and visitors.

Like most breeds, he needs plenty of exercise, both mental and physical. They are playful and bubbly, and sometimes might be a tad stubborn, depending on their mood.

Old English Sheepdogs are excellent, intuitive, and loving companions. They even earn the title of Dear Nanny or babysitter around young children. The herding instinct that has been carried down through the generations is still astonishing. These animals are gentle with other dogs and are always willing to play.

When laying the Old English Sheepdog down to be groomed, be careful to ensure that its feet and legs are not pinched between the table and your body. Also, be sure to lay the dog down in a smooth and easy motion to prevent injury to the shoulders, ribs, head, and hip. Establishing the first line is always the hardest because of the coats pre-grooming condition and the hair being crossed when the dog is lying down. To minimize hair being crossed try to lay the dog on its side. As you look at the Old English Sheepdogs back, neck, and skull, try to define a roughly straight line, which will become a basic reference for you. The first thing you will want to do is briefly brush the coat in its natural line of growth and fall, this way it will lie down as much as possible in the way it would if the dog were standing. This then shows the spine much better and you can start the grooming. Just brush it from top to bottom naturally, getting any mats that might be there.

As with all dogs that have ears that hang down, they will need to be cleaned on a regular basis to keep away ear mites and infections.

There are a few theories as to where the Old English Sheepdog originated. One states that they are related to the Deerhound and the Barbone. The second theory states that the Old English Sheepdog is related to the Bergamasco and the Briard. The third theory states that this breed is a descendant from the hairy Russian dog called the Owtchar that was brought to Great Britain on ships from the Baltic. He also may have been created through crosses between Bearded Collies animals brought to England from Russia, the Baltics, and France.

The Old English Sheepdog was developed in Englands West Country by farmers who needed an agile cattle drivers and sheepherders to take their animals to the market.

By the 19th century, the breed was widely used in agricultural areas. Often referred to as the Bobtail, the Old English Sheepdogs tail was customarily docked around the 18th century as a way to identify tax-exempt herding dogs. The farmers would shear their dogs at the same time they did their sheep, in the spring, and then use the fur to make warm blankets and clothing.

Old English Sheepdogs are very smart and talented, some of their talents throughout history include herding, retrieving, and watchdogging. They are a fine herding breed, which were used for reindeer herding because the dogs can tolerate cold weather very well.