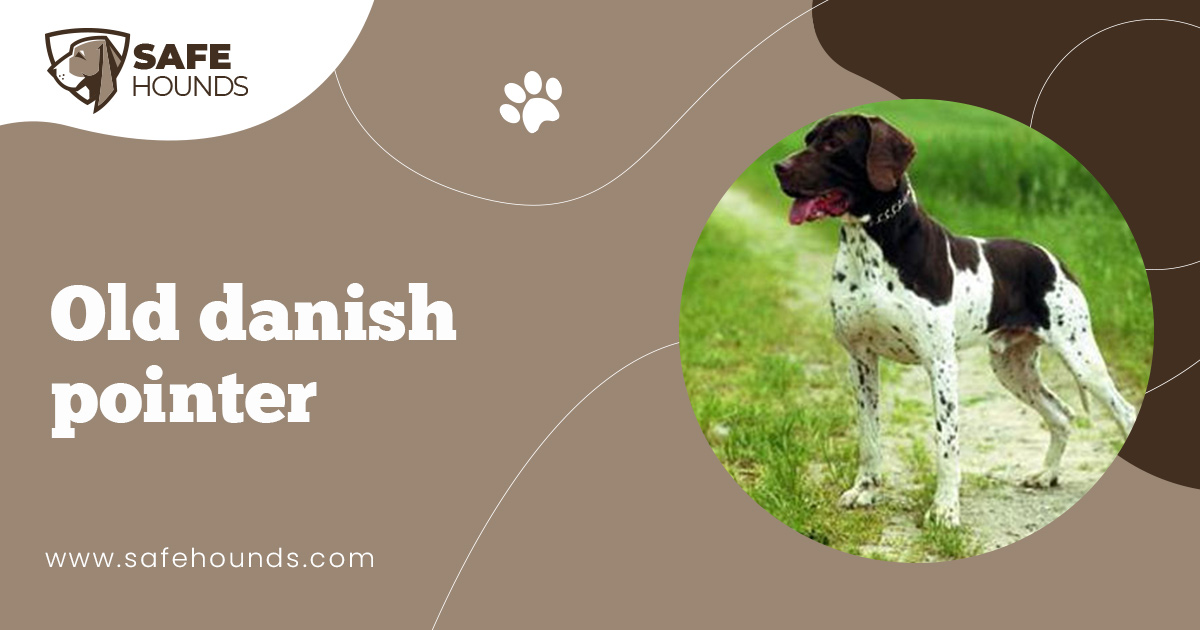 The Old Danish Pointer is a medium sized dog whose predominantly white coat is made distinct by brown markings. This breed is one of the two indigenous hunting dogs of Denmark. In its country of origin this breed is also called Gammel Dansk Honsehund. This breed has an impressive stature, a muscular but compact body. A significant and most distinct feature of this breed is the difference between the male and the female. The males are more powerful and quite substantial in size while the females are lighter but more spirited and have an impulsive and capricious attitude. Males and females though are both courageous and determined hunters. These dogs are rather quiet and known to have a stable nature. However, when on a hunt, the fiery personality of the female and the bold and gutsy temperament of the male will come to the fore.

The Old Danish Pointer is a versatile hunter, one that can easily adapt to varied terrain be it a small or a large hunting ground. This breed has a remarkable way of hunting. The dog would move slowly and cautiously never breaking contact with the human hunter. The dog may creep, drop to a lying position without making unnecessary disturbance to the ground that will alert the prey. When a scent is found, the tail will move energetically while the dog is making a full circle rotation. This is a signal for the hunter to come within shooting range. The first rate scenting ability as well as the cunning action in pointing to the game enables the Old Danish Pointer to excel in schweisshund work (tracking wounded deer) as well as in bomb detection.

The Gammel Dansk Honsehund is a most valued hunting dog in Denmark but the breed has not gained much exposure in other dog loving countries. Recently, an Old Danish Pointer was invited to participate in a European World Cup competition for all breeds of Continental pointing dogs.

The Old Danish Pointer is traditionally utilized as a pointing dog in Denmark, its country of origin. This is a medium sized breed of dog with an impressive muscular body. This breed that has a maximum height of 22 inches measured from the shoulders and weighs about 77 pounds has a skin that tightly fits the limbs and the body. The head is covered with a rather loose skin. Loose skin on the neck forms a dewlap. The heavy loose skin on the neck is typical of the breeds hound lineage. Short dense hair that covers the entire body is rough to the touch. This breed has a wonderful white coat that can have large brown markings or it can be heavily marked with small brown specks.

The Old Danish Pointer has a rounded wide skull, a short but wide head and a stop that is not too prominent. This breed has a strongly defined nose with well opened nostrils. Nose can be dark to light liver in color. The medium sized eyes have a dark brown color. The broad ears with rounded tips are low set. Front edge of the long ears should hang close to the cheeks. The impressive rectangular body of this dog is very muscular. The muscular neck is well furnished, the firm back is muscular too as well as the short wide loin. An Old Danish Pointer has a well developed forechest and a wide and deep chest that reaches the level of the elbows. The set on high tail has a wide base and tapers towards the end.

The Old Danish Pointing Dog has gained a reputation of being an excellent hunter of birds without disturbing the hunting grounds. This friendly breed is also known for being an excellent home companion too. An Old Danish Pointer can be quiet and can move slowly inside the house but once it is taken on a hunting trip the energetic, cheerful and active switch will be turned on at once by the dog. These are affectionate dogs. They love to be with the human family. An Old Danish Pointer is good and gentle with the children. This is not a dominant breed. A well socialized dog will tolerate other dogs and smaller pets.

These dogs are not barkers and they are known to be quiet and relatively inactive indoors. However, apartment living is not recommended for this breed. Even a house with a small yard will not be a suitable living arrangement for this breed. This breed will need vigorous exercise to keep them healthy and happy. These dogs may behave quietly indoors as long it is provided with sufficient exercise. Being working dogs they possess boundless energies. A home in the rural area where ample space is provided for the dog to expend its excess energies will be the most suitable living arrangement. This breed is a most suitable choice for a family who would want to have a hunting dog and an affectionate well mannered house companion.

Unlike show dogs, the appearance of a working dog is not given much importance. This breed will not require extensive grooming. A firm bristled brush used regularly will be enough to maintain the good condition of the coat. Regular brushing will also remove burrs and pests as well as distribute the natural oils of the coat. Regular brushing is very necessary to keep the dogs skin healthy. Bathing and dry shampooing should be done when really necessary.

The Old Danish Pointer, one of the two native hunting dogs of Denmark was developed in 1710 by a man from Glenstrup named Mortem Bak. This breed was in fact called the Bakhund in Denmark in honor of the man who has tirelessly developed this excellent breed of hunting dog. Mortem Bak has created this breed by crossing local bloodhounds with the dogs brought by the gypsies from Spain. Through eight generations of careful and extensive breeding, a pure breed Bakhound with a piebald coat was created. The black and white coated Old Danish Pointer was born!

However the popularity of the breed waned, the numbers have tremendously decreased. In fact the breed has nearly vanished during the war. The breed was revived through the efforts of a few breed enthusiasts. Slowly, the Old Danish Pointer has regained its lost popularity. The breed standard was recognized in 1962 by the Danish Kennel Club. Because of the dogs outstanding hunting abilities and the affectionate and gentle temperament, the Old Danish Pointer is the 3rd most registered breed in Denmark.