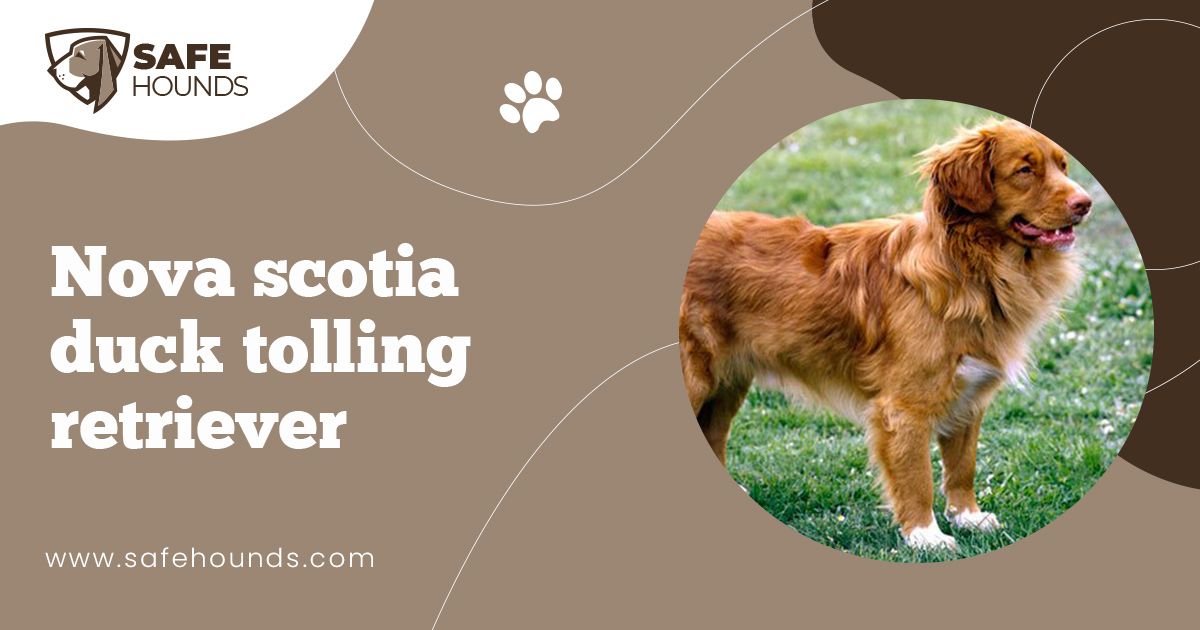 When you first see the Nova Scotia Duck Tolling Retriever you will at once notice their resemblance to the Golden Retriever. They do have some similarities in their personality as well as looks.

The Nova Scotia Duck Tolling Retriever is a medium sized dog that love exercise. He has a feathered coat that is usually orange-red. He is high-spirited during activities and desire plenty of vigorous activities. He loves his family, is good natured, and loyal.

During puppyhood you will have to be prepared for a very exuberant personality that seems to never tire, such as a two year old child. They can be destructive if left alone at home for hours or when they become bored.

Toys are great to have around for puppies and adults alike as they love carrying around and chewing on things, even your hand if you give them the chance. Chew toys and such items as rawhide bones are a necessity if you do not want your furniture, pillows, or other items used for this purpose.

The Nova Scotia Duck Tolling Retriever is not happy unless he is busy working. You will notice the sad or depressed expression in his eyes and on his face if he is not kept busy. He lov

es to hunt and work as he was bred to toll, lure, and retrieve waterfowl. This is an instinct that the Nova Scotia Duck Tolling Retriever still has today.

As stated previously, the Nova Scotia Duck Tolling Retriever looks similar to the Golden Retriever. He is a medium sized muscular dog that is medium to heavy boned.

The Nova Scotia Duck Tolling Retriever height is 17 to 21 inches and weighs between 37 and 51 pounds.

The coat color of the Nova Scotia Duck Tolling Retriever is any shade of red. Red ranging from golden red all the way to a dark coppery red with lighter featherings on the pantaloons, body, and underside of the tail is acceptable. All Nova Scotia Duck Tolling Retrievers have at least one distinct white marking such as on the tip of the tail, feet, blaze, or chest. However, white markings across the flanks, around the ears, back of the neck or shoulders is a reason for disqualification.

The Nova Scotia Duck Tolling Retriever has a double coat that is water repellant. It is considered to be of medium length and softness with a dense soft undercoat. During winter months the coat can form a long loose curl at the throat. Featherings appearing on the coat are soft. Hair on the muzzle is fine and short.

The Nova Scotia Duck Tolling Retriever has a personality unlike any other breed of dog. He is very intelligent enough so that he knows when danger is around for his master and will guard him from the danger no matter what. He has a charming personality, is easy to train, hard working, and clever. He may seem a bit low spirited if he is not active. He can be a bit wary of strangers. He loves all kinds of retrieving games. If you throw a ball once you had better be prepared to play for hours on end. He loves all members of his family and plays great with children as long as they love to throw the ball for him to retrieve. The are not very vocal except for when danger is near.

Apartment life can be fine for the Nova Scotia Duck Tolling Retriever as long as he is given plenty of exercise. He needs plenty of vigorous exercise or he will become depressed and even destructive. If you do live in an apartment, the best way in which to avoid a destructive behavior is to play fetch with him for a few hours every day

He does better in cold climates and does not like being left outside in high temperatures.

He will need regular brushing especially the undercoat. However, bathing is not recommended unless absolutely necessary as it will strip away his natural body oils. Dry shampoo is best.

They were developed for the luring ducks such as the way a fox does their hunting. Canadian hunters worked to develop a breed that could lure ducks and geese into shotgun range, then to retrieve them from the water once they were shot.

The hunter would hide close by the shore and toss a stick into the water. Of course, the Nova Scotia Duck Tolling Retriever would jump into the water with the slyness of a fox without barking to retrieve the stick. It would take more than just one throw before the prey would become suspicious of the activity and come to see what was going on. Then the ducks would be in shooting range.

The breed was called the Little River Duck Dog or Yarmouth Toller however, with the Canadian Kennel Club allowed registration in the late 1950s the name was changed to Nova Scotia Duck Tolling Retriever.