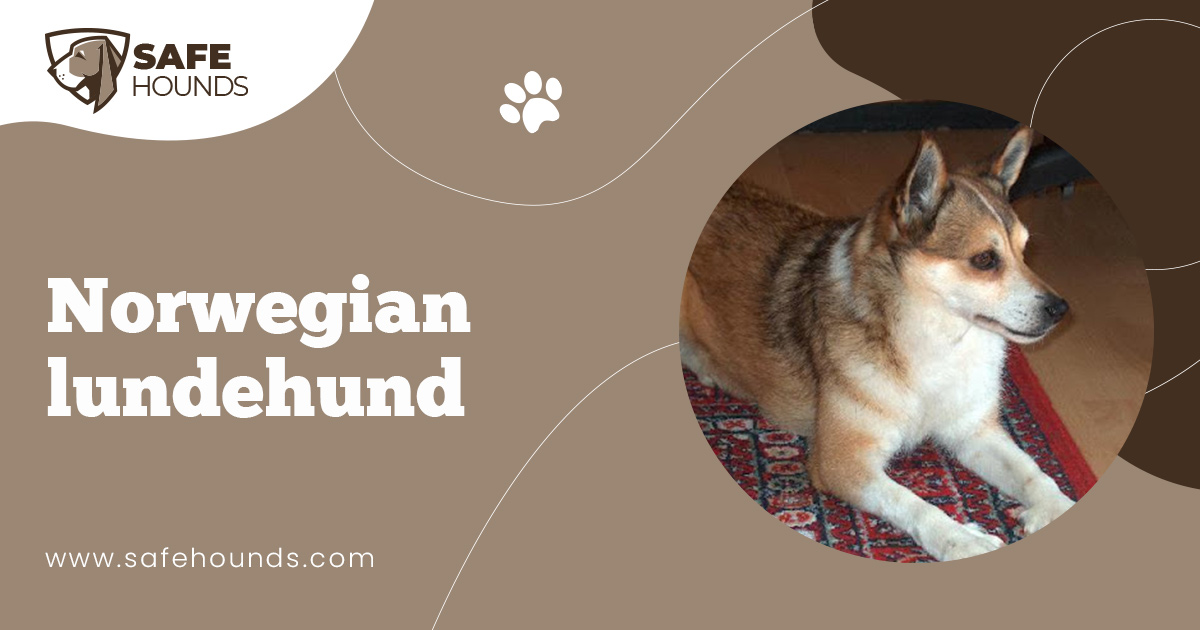 Graceful, agile and swift, incredibly intelligent, lively and stubborn are the inherent characteristics of the Norwegian Lundehund. Norway is the country of origin of this breed that is also called Norsk Lundehund, Norwegian Puffin Dog and Lundehund. This dog is considered to be a national treasure of Norway and was depicted in Norway postage stamps. The name Lundehund was taken from the word lunde which means puffin and hund which means dog. This breed is considered to be one of the rarest breed of dog in the world. Aside from the fact that the Lundehund population is fairly small, the breed possesses remarkable rare anatomical characteristics.

The Norwegian Lundehund is polydactyl. It has 6 toes on each foot. The dog has neck joints that other dogs do not have. These neck joints enable the dog to bend backwards so that the forehead touches the spine. Only the Lundehund and the deer have this unusual kind of neck joints. Very flexible shoulder joints enable the dog to stretch the forelegs to the side the same as human does. The ears can be closed at will so that it is protected from dirt and moisture.

These unusual characteristics make the Lundehund an exceptionally good puffin hunter. The extra toes enable the dog to balance on steep and slippery rocks. The extra mobility of the neck and the shoulder enables the dog to shift position in extremely cramped crevices. Puffins are sea birds that live and nest on the caves and crevices of cliffs that lined the Norway coasts. Puffins are hunted for the meat and for the downy feathers. A local farmer values a dog the same as his cow as a well trained and skilled Lundehund will be able to hunt more puffins to be sold for extra income.

A Norwegian Lundehund is a primitive breed. A lot of their habits and behavior are similar to that of the wolves and foxes. Socialization and obedience training may temper unwanted behavior but the dog would still cache food and react noisily to any unusual sound or movement. Because a strong prey drive is inherent, it would not be uncommon for the dog to climb steep inclines, to tunnel into cramped spaces just to search for and follow a prey.

A Lundehund is affectionate and fun to be with. These dogs enjoy the company of humans. They love to snuggle contentedly with a family member for hours. However, this breed is prone to the Lundehund syndrome. This is a serious chronic intestinal disease that prevents the body from absorbing nutrients from ingested food. This causes reduction of the dogs lifespan. 90% of the Lundehunds are affected by this disease. Fortunately the disease can be managed. A fecal test and a test for the serum protein level must be done every six months. Needless to say, this will be a financial burden and a prospective owner of this breed must be prepared to allot a budget for the health care of the dog.

A Norwegian Lundehund is an agile small spitz type of dog with a rectangular body. The dog has a wedge shaped head, a slightly rounded skull and a gradually tapering muzzle. Deep set almond shaped eyes are brown. Eye rims are brown. The triangular medium sized ears are very distinct given that they can be bent forward or backward at will to completely seal the ear opening. The medium length tail is high set. This tail is carried in different positions. At rest the tail may be curled upwards over the back or it may stream behind if the dog is on the move. The tail may hang between the hind legs and even under the stomach if the dog is unwell or intimidated.

The Lundehund has a double coat, a rough short outer coat that lies flat against the dogs body and a soft and dense undercoat. The coat on the head and on the front of the legs is short and longer on the back of thighs. The neck has longer and thicker hair. Usually male dogs have thicker and longer ruff around the neck. The tail is well covered with thicker coat and feathering. The coat can be white with dark or red markings or black, grey, reddish brown, tan or fallow with white markings. Some coats have black hair tips. A Lundehund has oval shaped feet with a minimum of six toes.

Lundehunds have a pretty unique personality. These dogs can be wonderful companions as they are extremely affectionate. They are cheerful and lively, friendly and non aggressive with everyone. They enjoy playing with kids however most dogs would not tolerate rough treatment. Because they have a strong pack instinct they will get along well with other dogs and would tolerate other smaller pets especially if socialized while still young. However, these dog are bird hunters and it would not be safe to have a pet bird within the reach of the dog.

This is an incredibly intelligent breed. The dog will understand at once what you want and what you are trying to say. Unfortunately, unlike other breeds, this one does not have the well known canine eagerness to please attitude. Similar to a cat, Lundehund can be indifferent to the human family. Training can be a challenge as the dog would certainly understand what you want them to do. The trouble is that they would prefer not to obey. Training these dogs involve a lot of patience and a steady supply of delicious treats.

A Lundehund is on the top 5 breed of dogs that is difficult to housebreak. Being a primitive breed, the dog would mark its territory. Be prepared to deal with a lot of accidents. A doggy door may be helpful but if the dog will be left unsupervised it would be better to have them crated.

A Norwegian Lundehund can do well in an apartment as this breed is extremely adaptable. As long as they are given the opportunity to exercise, they will be okay. The most suitable living arrangement however is a home in a rural area with a fenced in yard where the dog will be allowed to play and roam without the restrictions of a leash.

Apart from the annual booster shots these dogs would need to be taken to a veterinary facility every six months for fecal and protein level tests. This is to rule out the occurrence of the Lundehund syndrome.

The Norwegian Lundehund has a long history. It was believed that this dog has descended from the Ur hund, the breed of dogs that survived the 3rd Ice Age. These dogs that inhabit the Lofoten Islands were able to survive as these islands were ice-free during the 3rd Ice Age. Both the Lundenhund and the fossilized dog (Varanger dog) found in the Lapland, Russia has one less tooth on the either side of the jaw. These dogs have hunted puffins as far back as 1600 on the rocky crevices of steep cliffs that dotted the shorelines of the Veroy, Vaerog and Rost islands of northern Norway.

Because of the dogs unique physical attributes it can hunt the colorful puffins from the underground caves, narrow passages and steep rock walls. The dog has six toes on each foot creating an improved traction. The ears are protected from moisture and dirt as the ear canal can be closed at will. The unique shoulder and neck joints enable the dog to manipulate its body to pull puffins from narrow passages. Puffins are valuable because of its meat and downy feathers. This is also another source of income for the local farmers. The dogs are most sought after by the puffin hunters.

When easier means of hunting puffins were invented, the number of Lundehunds declined. Distemper outbreaks as well as the taxes that were imposed on dog ownership worsened the situation. In 1939 Eleanor Christie, a breeder purchased several puppies when she found about 50 Lundehunds in Veroy. Unfortunately, another distemper outbreak razed the remaining dogs in Veroy until only one was left. This lone survivor was rescued by Christie. The World War 11 further decreased the Lundenhund population until it was believed that only 6 dogs remained. These six dogs became the foundation for the revival of the breed, these dogs became the ancestors of the present Norwegian Lundehunds. In 1962 the Norwegian Lundhund Club was founded. Presently there are about 250 dogs in the US, more in Norway and about 1100 all over the world. Although the number is still small it can be safely said that the remarkable rare breed is saved from extinction.