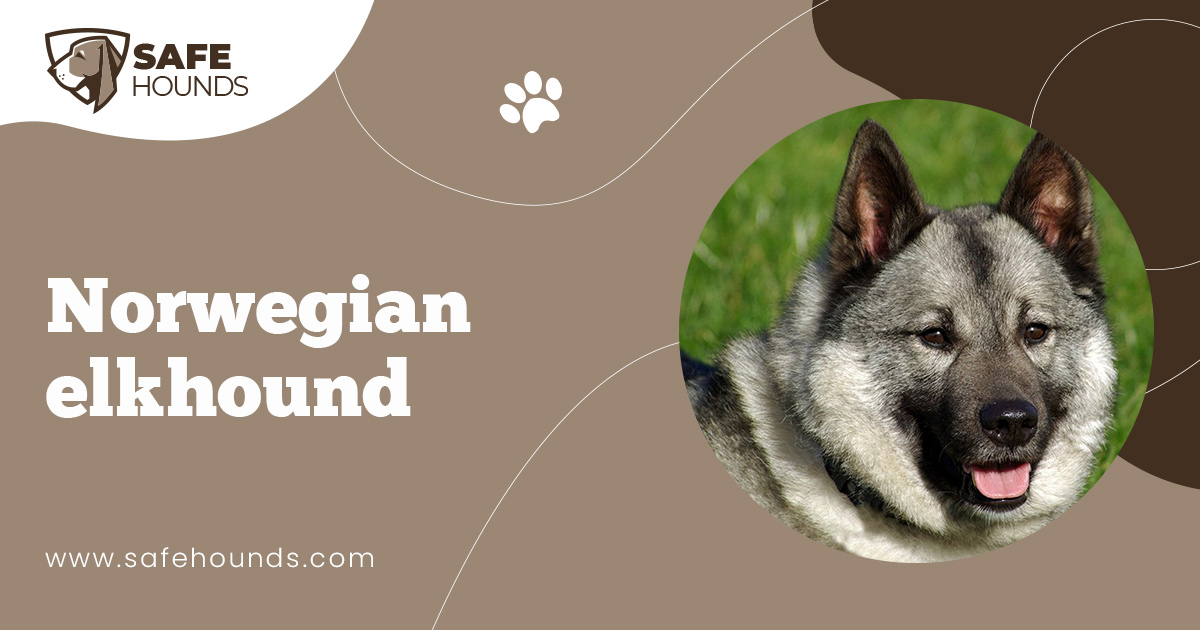 He can stand severe cold temperatures as he evolved in subzero temperatures, deep snows, dense forests, and rough mountain ranges. He has served throughout history as a defender, guardian, herder, and hunter.

He can be recognized be his wolf like face, erect ears, heavy coat and curled tail. He is rugged but is very athlethic and agile unlike his appearance would suggest. He loves to play very hard while enjoying all kinds of activities in the snow.

The Norwegian Elkhound is not a lap dog, he desire plenty fo vigorous activity or he will become bored and end up being a barking and destructive pet. One that can chew up everything in sight.

He is considered to be romp and play without much notice of who might be in his way, thus knocking over small children accidently.

The Norwegian Elkhound is not really a sociable dog, he prefers to be left alone in most cases, however, this can be changed with the proper training. They are very intelligent and do have a mind of their own. If you have never met a manipulative dog, you will the minute you meet the Norwegian Elkhound. Not only can he be a bit manipulative, but he can also be domineering and obstinate.

The first thing you will notice with the Norwegian Elkhound is his whiskers that may be trimmed according to the owner.

They have a double coat, which is gray. The undercoat is light silver on their legs, buttocks, stomach, and underside of the tail. The outer coat is gray with darker gray on the saddle with a lighter gray on his mane and chest. There are black tips on his ears, muzzle, and tail. Even the black hair on his muzzle will shade from black to a lighter gray from the forehead to the skull. The coat is hard, thick, and weather resistant. On his head, ears, front of his legs, buttocks, back of his neck, and underside of tail the hair should be even and short.

For dog shows, the color of the coat cannot have any color besides shades of gray. Disqualifying colors include brown, red, white, and solid black.

The Norwegian Elkhound is a medium sized Spritz type dog that is short and squarely built. His short body should be the length to his ribcage. He has a deep and wide chest. His front legs are parallel to each other and are straight. He has small paws, which are tight with thick pads.

The head is wide and wedge shape with a defined stop. He has strong jaws. His ears are pointed and erect. The eyes of the Norwegian Elkhound are dark brown and have a devoted and friendly expression. His teeth are always in a scissor bite. The tail should be held tightly over his back.

The Norwegian Elkhound is a hunter at heart and has been known to go after his prey under diverse conditions, such as a closed window will not stop his determination. He will just jump right through, not considering his own safety. On the other hand, he is very loyal to his master.

They bond with their pack whether a human family or a close-knit hunting pack. He is courageous, daring, playful, alert, protective, and adventurous. He is friendly with strangers but may not get along well with other dogs that he does not know.

The Norwegian Elkhound does well with children and normally considers them part of the family, which he will protect.

He is quite vocal and if left outside alone he will bark even more. They have a high-pitched bark, which will get your attention very quickly.

The Norwegian Elkhound can be quite well with apartment living, however, he should have a large yard in which to romp and play. He does better in cooler temperatures and should not be left out in the heat.

When it comes to exercise, he will need at least one full hour of exercise per day. Running along side you as you jog or bike ride will keep him happy.

He will need a good brushing and more so during shedding seasons such as autumn and spring. You should use a rubber brush or wooden comb to ensure you remove all the dead hair, as it will stick to the new hair. Bathing should only be done on an as needed basis.

The Norwegian Elkhound was developed over 6,000 years ago. He was originally developed to aid early Scandinavians in hunting large game such as bear and moose. Remains of the ancestors have been discovered in burial sites like Viste Cave in Jøren, Norway. The remains dated back to between 4000 and 5000 BC. As far as archaeological can prove, the Norwegian Elkhound has been around and was domesticated during the Stone Age.

It is believed the Norwegian Elkhound is a descendant of the ancient Pariah Dog. These dogs have ancestors, which relate to two wolf haplotyes, which were found in France, Greece, Italy, and Romania and one other relationship with a wolf haplotype, which was found in western Russia.

Throughout history, the Norwegian Elkhounds keen hunting desire has been used for hunting all kinds of prey other than bear and moose, which includes badger, lynx, mountain lion, bear, wolf, reindeer, elk, and even rabbit. This breed proved to hunt better at night and proved to be excellent for hunting badgers.

The Norwegian Elkhound has proven himself for many tasks throughout history including sled dog, a great hunter, and of course a loving and loyal family pet.

Some of the traits that are seen in the Norwegian Elkhound are hunting, herding, guarding, and agility, tracking, watchdogging, and sledding.

As for famous Norwegian Elkhounds, President Herbert Hoover owned one by the name of Weejie.