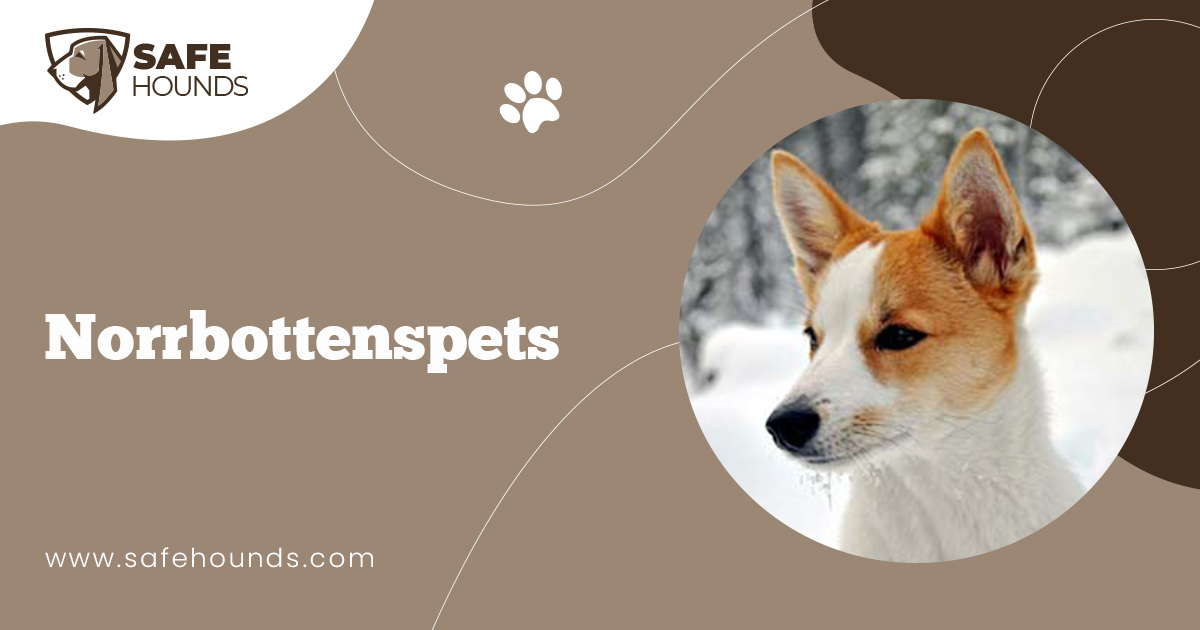 Norrbottenspets the ancient breed of dog that originates from Sweden is also known as the Nordic Spitz and the Pohjanpystykorva. This breed is the national dog of Sweden. Norrbottenspets was originally utilized as a farm dog and a hunting dog. Although the dog does not have the long hair typical to a northern breed this dog can easily cope with the long harsh winters and the deep snow to hunt. The dog is an excellent hunter, one that would intently listen for the sound of a bird in flight and led the hunter to where the bird has landed.

The Nordic Spitz is quite small as compared to other northern spitz breeds. This small dog though has a big personality. They are highly intelligent and would always know whom to trust and to bestow their affection. This furry creature is energetic and vivacious would never fail to make the master smile with their antics.

The Norrbottenspets is one small foxy dog. This description is given not only because of the fox-like head but because the dog is cunning. The dog is an energetic and playful furball. The dog however, can be hot tempered and would leave an owner perplexed as to what will be the dogs next move.

Norrbottenspets are very rare in North America and even in Sweden their land of origin, the breed population is still small. This breed almost became extinct in the 1940s. Recently the population has increased tremendously as the dogs impressive appearance has captured the interest of dog lovers. People are now purchasing and raising the dog as companions. The dogs skill in hunting and killing rodents is a bonus if you purchase a Nordic Spitz. The dog has also excelled in search and rescue operations. These are tireless and tenacious workers and are known to form a strong bond with their handlers.

The Nordic Spitz is a healthy breed and seldom suffers from health problems. They are expected to live for more than 20 years.

A Norrbottenspets is a small dog with a compact and well muscled body. The dog gives the impression of being square because the body length is equal to the height. The back is rather short but strong and muscular. The dog has a well developed forechest, a deep chest and a rib cage that reached below the elbows.

The dog has a wedge shaped broad skull, a moderately long muzzle that tapers to a point, a black nose and a moderately defined stop. The color of the large almond shaped eyes would range from shades of light amber to deep chocolate brown. Eyes are bright and have an energetic and calm expression. The set on high medium ears have rounded tips. Ears are pricked. The dogs neck is short and slender but appears to be thick because it is covered by dense fur. The dog has tightly fitting lips. Well developed teeth meet in a scissor bite.

Norrbottenspets has double coats. The undercoat is fine, soft and thick. The overcoat is rough, straight and close fitting. Both coats insulate the dog from harsh and extremely cold weather. Ideal coat color is white with red, tan and brown markings. The ears, nasal bridge, the skull and the front legs are covered with short hairs. Slightly longer hair covers the neck and the back of thighs. Long hair covers the set on high tail making it bushy. The tail is carried loosely curled over the dogs back, the tip touching the side of the thighs.

The breeds average height is 16 to 28 inches and average weight is 25 to 33 pounds. Females are usually smaller than males.

A Norrbottenspets is an affectionate and loving dog that would form and display unwavering loyalty to the owner. The dog can be likened to a shadow as it would follow the master where ever he goes. These dogs are vivacious and playful. They make excellent family companions as they are very gentle with children. A Nordic Spitz is one of the ten breeds of dogs noted for their gentleness with children. The dog can be depended to guard the children. This breed is never known to hurt a child. The dog would simply retreat when teased or harassed by an obnoxious child. However the dog may never play again with the child. Because of the dog herding background it gets along well with other dogs and other smaller pets,

These are hunting dogs and bravery is inherent. These dogs like to bark too. They would warn the owner of approaching strangers. However the dog would not make an excellent guard dog as it is friendly with everyone. Excessive barking can be corrected with obedience training. The dogs intelligence coupled with their desire to please the master makes training the dog easy. Training however must be done in a positive manner as the dog would not take to harsh reprimands. The dog would get bored with repetitive commands too.

Being working and hunting dogs, a Norrbottenspets is highly energetic. The dog would appreciate being given a task to do. They would also need more exercise. This is why the dog is more suitable for sports minded people who love the outdoors. The dog will be an excellent companion in hiking, jogging, camping and other outdoor activities. Apartment living may not be a very good idea given that the dog would need ample space where they will be given the opportunity to roam, to exercise and to burn their excess energies.

The Norrbottenspets is a beautiful dog with an impressive looking coat. This breed that was originally developed as a hunter has now evolved to be excellent family pets as the dog is easy to care for. A Norrbottenspets is a clean dog with no doggy smell. Bathing therefore should be done on a necessary basis only. The coat however would need to be regularly brushed to maintain its good condition. Being short coated hair trimming would not be necessary. The teeth though should be regularly brushed, the nails regularly trimmed. Ears must be inspected on a regular basis to prevent infection.

The Norrbottenspets originated in Sweden in 1600s. It was believed that the ancestor of this breed is the dingo, the small dogs that lived with people in the northern hemisphere. During the ancient times hunting is necessary not only for food but also for clothing. These dogs became excellent companions of hunters.

The same type of hunting dogs lived with the Finnish people in North Botnia (Norrbotten) as well as on the border area of Sweden, Lappland and Kainuuland. These dogs have lived for centuries in the wilderness settlements. Legend has it that these small brave hunting dogs have saved many masters from the attacks of bears and other ferocious large prey.

During the 1800s Finnish kennel men have undertaken the project of breeding the Finnish Spitz, the national dog breed of Finland. The solid colored spitz dogs were used for the breeding and the white spotted spitz were not included in the program. These little white spotted hunting dogs were adopted by the Swedes and in 1910 the first standard for the Norrrbottenspets was approved by the Swedish Kennel Club. However, the story of the Norrbottenspets is short-lived. In 1948 the stud book was closed as it was thought that the breed has gone extinct after the World War. The mix-up was the result of language barriers and cultural differences.

Fortunately during the early 60 some breed enthusiasts scoured remote villages for remaining dogs. A few Norrbottenspets were found in Pajala (Smithstown) from where a breeding program was started. In 1966 the breed was officially named Norrbottenspets and a new breed standard was confirmed by the FCI. The same standard was accepted by Finland in 1973. The breed is making a slow but steady comeback. Aside from the impressive appearance dog lovers value the dog for its outstanding personality.