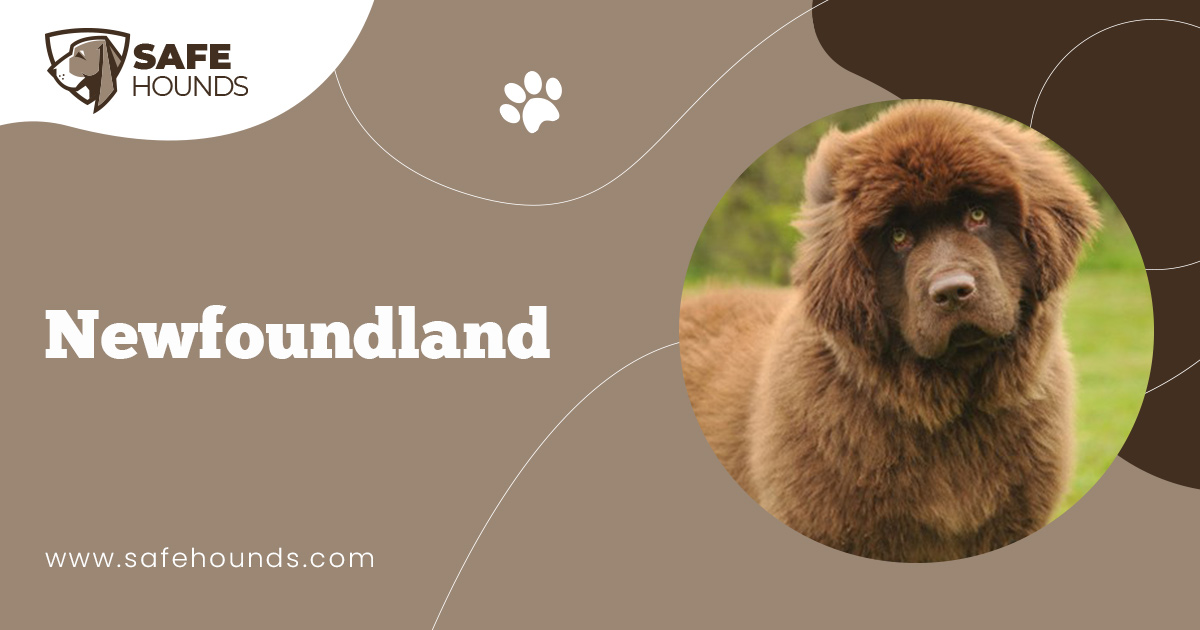 The Newfoundland is a huge dog that has the best size and strength to accomplish the many tasks he is famous for such as rescuing men and women from shipwrecks, children that have fallen into deep water, and aid fishermen with pulling in their large nets full of fish.

His heavy coat protects him from cold weather and the icy waters from his native home. He has big, strong, webbed feet that also make him an excellent swimmer. They do well on both land, water, and have been known for working very hard to please their masters. He is however, known better as a water dog and is still used in Newfoundland and Labrador, as a working dog where is pull cards and is seen being used such as a pack horse.

He has powerful back legs and of course is large enough to pull a drowning man to safety. His lung capacity is large enough for him to swim large distances and his warm coat protects him even in icy waters. The Newfoundland is also known for his high intelligence, loyalty, and of course his charm. He obeys his master with a undying loyal while reserving his own intelligence which he uses responsibly especially in rescue efforts.

Today, you can see the Newfoundland as a companion, guard dog, or as a family pet. He has been known throughout history for being a protector of children as well as a great playmate.

He is a strong and big dog with a wide heavy head. He stands elegant with a broad muzzle that is a bit short and squared.

His double coat is flat and water resistant. The outer coat is coarse and long which can be either wavy or straight. The under coat is soft and dense. The hair on the face and muzzle, however, is short and fine. The hair on the back legs is feathered. The tail has long dense hair.

The coat color of the Newfoundland is normally black, brown, gray, and white and black.

Solid colors may have areas of white on the chin, chest, toes, and the tip of the tail. In some cases, with a black or gray coat you may notice a slight bronze coloring.

The Newfoundland has small dark brown eyes, black noses except with bronze coated ones, and ears that are triangular and pendant shaped.

Of course, as stated before they have webbed feet and dewclaws should be removed on the back legs. The tail hangs down.

The Newfoundland is a personable dog with good temperament, courageous, intelligent, and generous. He is considered to be calm, gentle, noble, loyal, dignified, and very devoted to his family.

He is quick to act if he believes his family is in danger, however, with his own family he is very gentle and kind. He has been known to be a wonderful babysitter. He loves the outdoors and needs plenty of companionship from his family. Their nicknames say a lot about their unique personality, which are Gentle Giant and Natures Babysitter. As stated by the American Kennel Breed description, Sweetness of temperament is the hallmark of the Newfoundland, this is the most important single characteristic of the breed.

Apartment life is fine with the Newfoundland as long as he receives plenty of exercise. They do not do well in summer months when temperatures are high. If they are outdoors during the summer, they require plenty of shade and fresh water.

They do not mind lying around the house, however, they do require exercise for health reasons. Swimming is one of their favorite activities.

This breed has the kind of coat that magnets dirt and debris. It is therefore necessary to use a hard brush on the coat daily not only to remove the dirt but also to prevent the formation of mats. Some owners would bathe the dog only when necessary because they believe frequent bathing removes the oil the waterproofs the coat. Bathing the dog too often would also dry out the skin and therefore cause skin problems. Newfoundlands though are waterdogs. Many dog owners would bathe the pet as often as necessary. Dogs that are for the show ring are often bathed twice a week to maintain the impressive appearance of the coat. However, these owners make sure that a good shampoo is used on the dog.

The Newfoundland needs plenty of companionship and will pine away for his family if left alone.

The Newfoundland originated in Newfoundland from dogs that lived on the island, the black bear dogs. The Vikings introduced the dogs in 1001 AC. The European fisherman had a desire for dogs to aid with their fishing, thus the shaping of the Newfoundland began.

During the 1880s fishermen from England and Ireland traveled to Newfoundland in search of these unique dogs. What they found were two dog types of working dogs, one was a bit heavier built with a long smooth coat, while the other one had a lighter build and was more of an active water dog. The first one was the Newfoundland whereas the other one was the Labrador Retriever also known as the St. Johns breed of the Newfoundland. Both dogs were used to pull fishnets and other heavy equipment such as carts.

Some believe the Newfoundland has a close relationship to the Labrador since they were both found in the same region. As far as anyone can surmise, the Newfoundland originated from the breeding of Tibetan Massifs, which were brought to Canada by European fisherman, with local dogs of the area sometime in the 1700s.

At this time the Newfoundland had many jobs such as pulling fishing nets, retrieving anything that happened to fall overboard, carrying boat lines to shore, rescuing drowning and shipwrecked victims, haul lumber, deliver milk, and practically anything that took strength.

One brave Newfoundland received a gold medal in 1991 for safely pulling a lifeboat with twenty shipwrecked people.

During World War II, this bred hauled ammunition and supplies for the Armed forces in Alaska and the Aleutian Islands.

Some of the most famous Newfoundlands include Boatswain the pet of Lord Byron, Pilot the pet of Edward Fairfax Rochester in Jane Eyre, Seawards Blackbeard the 1984 Best in Show winner at the Westminster Dog Show, Sable Chief the mascot of The Royal Newfoundland Regiment, Seaman the pet of Meriwether Lewis, Swansea Jack the Dog of the century and Sergeant Gander the Mascot of the Royal Rifles of Canada who was killed in action at the Battle of Hong Kong when he carried a grenade away from wounded soldiers. Gander was awarded the PDSA Dickin Medal retroactively in 2000.