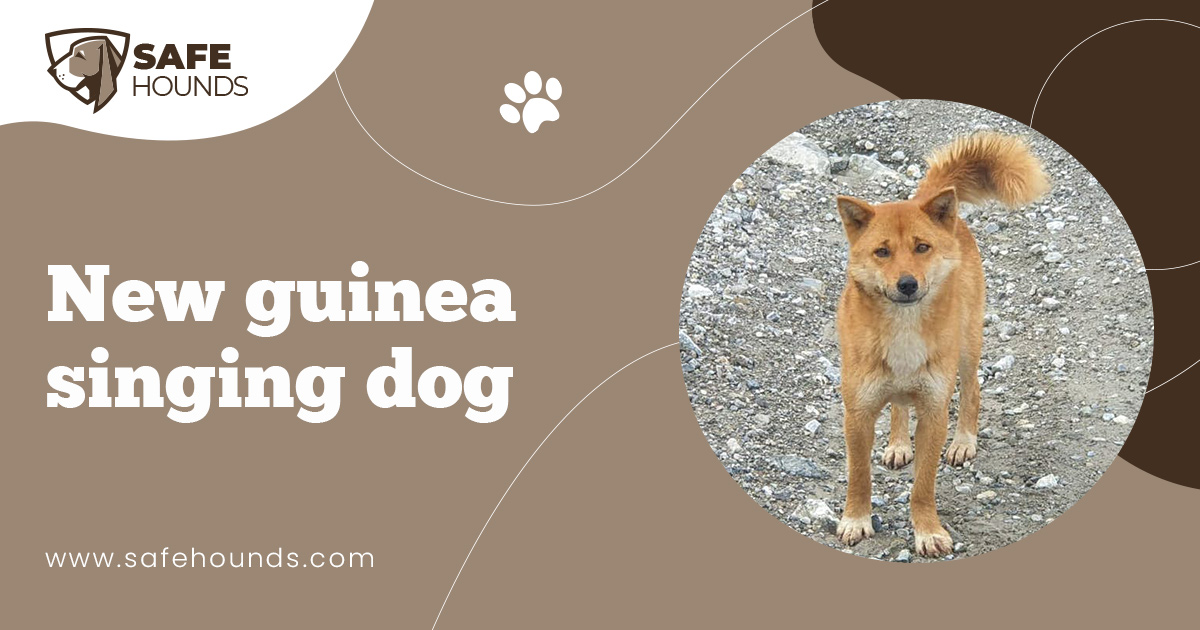 The New Guinea Singing Dogs have been singing an eerie and spine chilling alien song for over 6000 years on the isolated island of New Guinea. These dogs howl like wolves but what is unique with their howling is their ability to modulate the pitch. What would you do if you are alone in the New Guinea highlands and you are suddenly serenaded by the dogs creepy singing? Your hair will surely stand on end especially if the rustling in the bushes showed two demonic glowing green eyes. These are the typical characteristics of this breed that is believed to be the oldest type of pariah dog. Unlike other breeds of dogs, a Singer, as this breed is also known do not let out ferocious and repetitive barking. Long single note howls, varying tones of yelps and whines are included in this dogs repertoire.

These singing dogs from New Guinea are small to medium sized breed with a fox-like appearance. The plush coat and the all natural condition gave these agile and graceful dogs an elegant appearance. These dogs are believed to have developed from wolves but they show many unwolf-like behaviors. Aside from the modulated howling, these dogs have a different way of showing their submission. Singers do not exhibit the play bow common in other breeds rather they have the open mouth play bite common in coyotes. These dogs do not live in packs and they come to estrus only once a year. The dogs flexibility is not common in other breeds. NGSDs have extremely flexible bodies. Once the head has passed through an opening, the body will squeeze through. An owner should not be smug with a six foot fence. Remember that this dog has adapted to living in the mountain thus it can be as agile as a cat. The dog can easily jump and clamber over a six foot fence especially if a squirrel is on the other side.

The New Guinea Singing Dog is a small to medium sized dog that measures from 14 to 15 inches at the shoulders and has an average weight of 25 pounds. This dogs wedge shaped head has a shallow furrow that vertically runs from the prominent stop to the occiput. This bridge has a level nasal bridge. The muzzle tapers to the black nose. This singing dogs close fitting lips turn up slightly at the corners giving the impression that the dog is constantly grinning. Complete set of teeth that meets in a scissor bite are rather large for the size of the dog. This breeds rather large carnassials tooth that is usually longer than 10% of the length of the skull is used to crush bones and tear meat. This type of carnassials teeth are seen in wild canids. Small triangular eyes with dark pigmented eye rims are obliquely set giving the dog a mischievous and crafty expression. Eye colors range from dark brown to dark amber but turns to a bright glowing green color when low light is reflected. Small erect ears are triangular in shape and set widely apart.

The elastic skin that covers the long and slightly arched neck does not form dewlaps. Singers have hard, well muscled and flexible bodies. Shoulder blades are well laid back, the topline is level. Deep chest that reaches the level of the elbows has well sprung ribs. Tail that forms a continuation of the topline is long reaching the hocks. Thick at the base, the tail is profusely covered with white or very light tan colored hair. On the move or when the dog is alert, the tail forms a question mark-like curve and carried over the back. The tail is tucked under the body when the dog is stressed. A New Guinea Singing Dog has a short double coat. The coat is dense but the undercoat is visible through the plush top coat. The medium to long coat comes in shades of red and black and tan. This breed may have a black tipped outer coat as well as tan and white markings.

A New Guinea Singing dog is considered as a wild animal. Although most dogs were bred in captivity, the natural instinct of the dog to escape confinement will never be out bred from the dog. However, the dog can be socialized and trained to be a wonderful addition to the family. Of course the dog would not be for everyone. This dog forms a strong bond with its people so much so that it would be depressed if separated from its favorite person. This affectionate dog has so much love to give but it would never consider the owner as the master. The dog not only climbs like a cat, like a cat this dog would hate being a slave. The dog would want to be on equal footing with its family and would not appreciate harsh reprimands. NGSDs have different personalities. While some dog would do well with older children others are noted to be very gentle and protective with small kids. The dog has a very strong prey drive. In the wild the dog feeds on small prey. This dog may tolerate other dogs but it will be very dangerous around smaller pets. A Singer is a very versatile dog. It would do well in small living quarters or in a home in the country. Because the of the dogs close bond with its family, its activity level will depend on the familys lifestyle. The dog would keep up with active owners in the same manner that it will be satisfied with a daily walk and to stay quietly inside the house all day if the owner is less active.

A New Guinea Singing Dog is a low maintenance breed. The short coat is practically self cleaning. The dog would not need daily brushing but it would certainly enjoy being touched by its owner.

The New Guinea Singing Dog is considered to be a living four legged fossil. It is highly probable that the NGSD is the oldest type of pariah dog. This dog type has existed in the remote island of New Guinea since the Stone Age. Because of the isolation of the island, only island people have enjoyed this intelligent fox-like dog for about 6000 years. This dog type was introduced to dog enthusiasts by explorers who found the dog in the 1800s. The New Guinea Singing Dog is speculated to be related to the ancient dogs that have descended from domesticated Asian Wolves that have existed more than 15 years ago.

In 1897, a dog was shot by Sir William MacGregor in Mount Scratchley. This dead specimen was the first to leave the island. The skeleton and the skin preserved in alcohol was sent and stored in the Queensland Museum. In 1911, the specimen was assembled and studied. A pair was captured in 1956 and sent to the animal study center in Nondugl. The pair of dogs captured in the remote Lavanni Valley of the Southern Highlands District of Papua New Guinea was sent to Sir Edward Hallstrom, the head of the Taronga Park Zoo in Sydney, Australia. Canis hallstromi was the name given by Sir Edward Hallstrom to the pair of dogs. This dog type was reclassified by the scientific community as Canis fasmiliares dingo or Canis lupos dingo meaning that the NGSD is a subspecies of the dingo. Studies and DNA analysis conducted on this dog type verified that its diversity is highly different from the way other breeds differ from each other.

The New Guinea Singing Dog has adapted well to life in captivity. A litter was delivered by the pair in Taronga Park Zoo. This historic litter became the forebears of most of the captive NGSD today. Eight other dogs were captured from the wild. However majority of the dogs found in other zoos have descended from the original pair in Taronga Park Zoo. In 1958, this Australian zoo has sent the first female singing dog to San Diego Zoo. This was followed by a male. In 1960, pups produced by these imports were sent to other zoos in the US and in Canada.

These dogs have never been studied in their natural free ranging condition thus their behavior in their natural habitat is virtually unknown. Singers are considered to be undomesticated canid like a fox or a coyote these dogs are just wild domestic dog. After studies were made on captive specimens, the NGSD was classified as a subspecies of the canis familiaris dingo (domestic dog). In 1995, about 300 of this dog species are in captivity but after the reclassification, many zoos have stopped their breeding programs. These dogs are now rarely seen. Expeditions in the New Guinea highlands to find specimens of this wild dog failed although dog droppings and the distinct howling can at times be heard.