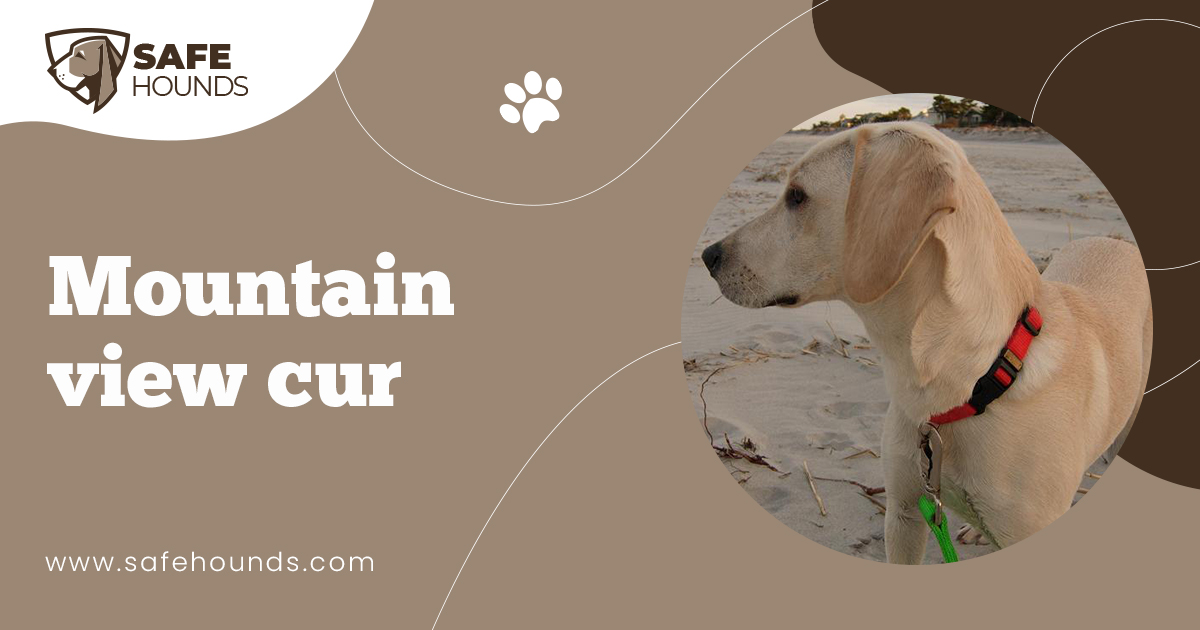 Generations of programmed breeding, of careful selection and strict culling has resulted to the development of a breed with an excellent hard hunting ability and a well balanced temperament. The Mountain View Cur is noted not only as a purebred but also the thoroughbred in the cur world because of the remarkable breed uniformity. The Mountain View Cur is a fairly new breed. Its history can be traced back to the late 1980s. This breed was developed in United States by a husband and wife team. Michael and Marie Bloodgood have used Mountain Curs as the foundation stock for this breed.

Mountain View Curs were primarily developed to track, to tree and to hunt small and large game. This breed is acclaimed for its admirable work ethics. A Mountain View Cur will work tirelessly in harshest terrain and even in the most unfriendly weather condition. The dog is noted for its high prey drive but a leash will not be necessary when the dog is hunting as it customarily checks in with the master from time to time. A Mountain View Cur is the ultimate hunter. The dog is noted for its admirable hunting ability but the dog has a warm and gentle temperament. The dog has the inherent desire to please its master. This is one of the reasons why Mountain View Curs are one of the most popular choices of dog enthusiasts – hunters and non-hunters. This outstanding hunter will always be ready for a jaunt in the woods to tree and to hunt in the same manner that it will enjoy being inside the home to be a part of family activities.\

Years of careful and selective programmed breeding has created a breed with very few genetic health concerns. A Mountain View Cur is a healthy and hearty breed with about 12 to 16 years of life expectancy. Although the breed has attained an underground popularity in the United States, this breed is rather unknown outside its country of origin. Obtaining a puppy can be difficult as aside from the high price, a prospective owner may have to wait awhile because of a long waiting list.

The Mountain View Cur has directly descended from the original Mountain Cur. Surprisingly, the dog has very little resemblance with its progenitors. Most Mountain View Curs for instance are born without dewclaws. Some pups are born with dewclaws but they are immediately removed right after birth. This breed that resembles a hound measures from 18 to 26 inches at the shoulders and weighs from 30 to 60 pounds. The dog has a dome flat head that is rather wide between the eyes, a heavy muzzle and high set short to medium ears. Prominent dark eyes are very expressive.

A Mountain View Cur is a strong boned and muscular breed. The dog has a strong muscular neck, a straight strong back and a deep chest. This hunting dog can have a natural bobtail. Puppies with longer tail are commonly docked a few days after they are born. This breeds legs are set for speed – straight, strong and very muscular. Cat-like paws are set for speed as well. Speed is an important asset of this hunting breed. A Mountain View Cur has a double coat. The undercoat is soft and fine. The outer coat can be rough or smooth. Coat colors vary from yellow, solid black, brindle, black and brindle. These dogs commonly have white markings on the muzzle, chest and feet.

The Mountain View Cur was primarily developed to hunt. Selective breeding has developed a breed that while acclaimed for its excellent hunting ability is also valued for its well balanced temperament. This affectionate dog forms a strong bond with its people. Because of the inherent desire to please the Mountain View Cur is one of the most obedient breeds. This makes training this intelligent breed easy. Due to the intelligence, the dogs were trained to be bomb and narcotics sniffing dogs and law enforcement dogs. These hunting dogs have excelled in search and rescue operations as well. This breed is gentle and playful with the children. A Mountain View Cur is protective of its family. Once you have this dog you can be sure that no intruder will be allowed to enter the home. However, the dog is not overly aggressive. It can also discern a dangerous situation from what is not. This means that the dog will allow people that are accepted by the family to enter the home. A Mountain View Cur would tolerate other dogs but because of a high prey drive, the dog will be dangerous to smaller pets. This breed is highly energetic. If you choose to have this breed for a pet you have to make sure that they have ample space where they can expend their excess energies. These dogs are relatively inactive indoors but they would not do well in apartments or in small houses.

The low maintenance needed by a Mountain View Cur is one of the plus factors in choosing this breed for a pet. Occasional brushing would be enough to remove dead hair. The grooming sessions can be considered as bonding moments between master and pet rather than maintaining the good condition of the coat. Frequent bathing will not be necessary as well as it can strip off the natural oils and cause dry skin. This breed though would need to be taken on daily long walks if a fenced in yard is not available. This working breed would thrive well if given the opportunity to hunt in the woods but if the dog is kept solely as a home companion, the owner has to ensure that the exercise requirement of the dog is met.

The Mountain View Cur was developed in the late 1980s by Michael and Marie Bloodgood. In 1987, the Bloodgoods formed the Mountain View Kennel in Afton, New York with the objective of developing a breed of cur that not only would have the qualities of an outstanding hunter but one that will also be much easier to handle than a hound. After years of selective breeding, the Bloodgoods have successfully created a breed that was named after the kennel where it was developed.

The Mountain View Curs were primarily developed to hunt. The dogs have proven their prowess in treeing raccoons and squirrels. These strong and courageous dogs are noted for their high prey drives. A Mountain View Cur hunts coyote, rabbits, hare, turkey, grouse, opossum and pheasants. These dogs will valiantly face wild boars, bobcats, lions and bears. And what do you know these dogs that are virtually wearing the hunting cap make dependable herders of cattle as well.

The word cur denotes a dog of unknown origin. Despite the cur in the breed name, the Mountain View Cur has a precise origin. Because of the uniformity in appearance this breed is in fact considered to be a thoroughbred among curs. The Mountain View Cur was developed from a strain of the Mountain Cur. The Mountain Cur is a rugged and stocky working dog that has descended from the dogs brought by the European immigrants to the New World. These dogs are most prevalent in Ohio River Valley and in Southern United States.

Mr. and Mrs. Bloodgood have been developing and training coonhounds for over 20 years in their Black River Kennel. However, finding hounds that will handle better has become a challenge. The Bloodgoods selected 56 Original Mountain Curs but only 6 were able to fit the bill of being outstanding treeing dogs. Out of the 6 only 4 (3 females and a male) were noted to be good reproducers. The breeding program was concentrated on these four remaining OMCs. However, one female was culled because of the ill tempered male puppies it produced. Another was taken out from the breeding program because the pups produced lack intelligence and hunting abilities. This leaves two dogs – Mountain View Dance, a female and Mount View Gold Nugget, a male. These two dogs became the foundation of the Mountain View Curs. Mt. View Buckshot, a male and Mt. View KY Lady, a female were later on added to the breeding program. The strict breeding program was continued over the years but other Mt. Curs that fit the necessary specifications were added.

The dogs were first registered in the Kemmer Stock Breeders Association Registry. Breeders however, realized that the Mountain View Cur is unique from the other OMCBA dogs. Due to out crossing it is possible that purity of the breed will be lost. Founders believed that the breed should be registered as a separate breed. In April 1995, the American Squirrel and Night Hunters Association was chosen to handle the registration of the breed. Again some breed enthusiasts believe that the breed should have its own registry thus the Mountain View Cur Registry was formed in 1996.