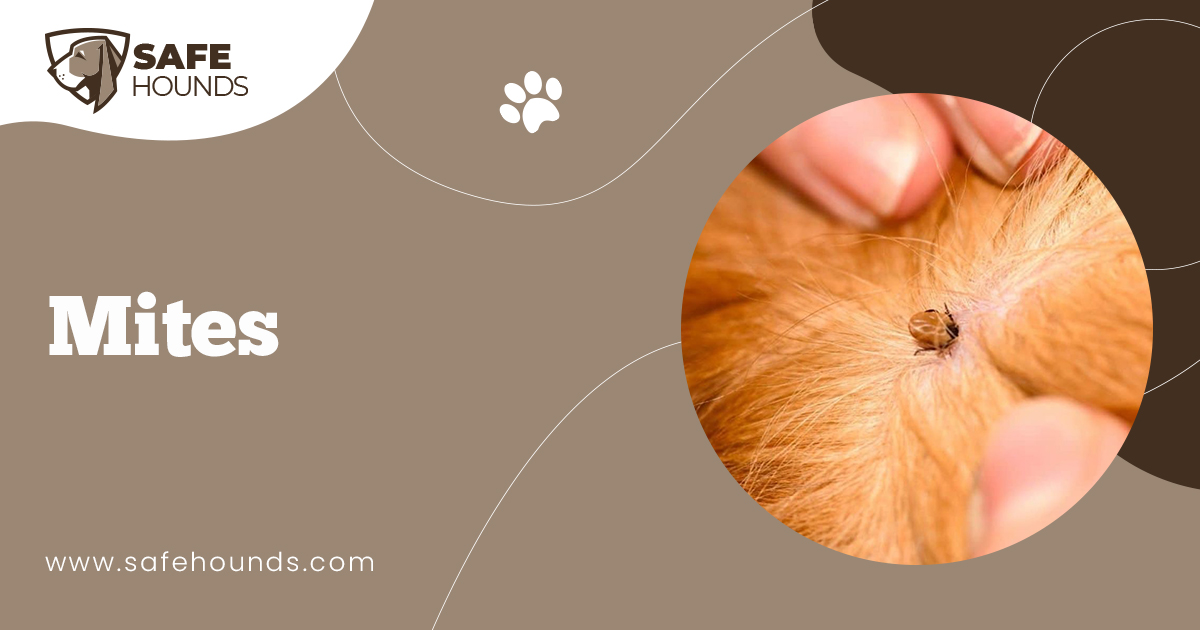 Mites are microscopic crab like parasites that live on and under the skin of your dog near the hair follicles, which is the cause of the canine skin disease mange. They burrow under the skin via pores and hair follicles and feed off dead skin cells. Mites can live all over a dogs body and are very common in the ears.

The first type of mange is caused by the Demodex canis mite and is known as Demodectic Mange. Almost all dogs have small numbers of this mite living in their body with no problem, but its when their breeding gets out of hand and the dog becomes infested that it proves to be an issue. This usually happens because the dog has a poor immune system and cant keep them under control.

The second type of mange is caused by the Sarcoptes scabei mite and is known as scabies. This is generally caught and passed on by other animals and dogs, and are not pre-present in the skin before infestation. It is more common for ears to be infected by this type of mange and it is a very contagious mite, which can spread very quickly.

Both types of mite arent directly connected to cleanliness and they can survive on clean and dirty animals. Despite this is fair to think that an unclean environment where lots of dogs are present is more susceptible to outbreaks of mange because they are unlikely to be treated and can spread quickly.

The life cycle of a mite is about 14 days. The male and female mate on the skin surface and the male dies shortly after. The female then burrows under skin to lay her eggs. The eggs hatch in 4 to 8 days and then quickly grow in to adults. The process then repeats itself.

Humans rarely catch mites themselves and there are actually specific species of mites that prefer humans to other animals so the chance of catching mites from your dog is thin, but not impossible.

Why are Mites a Problem?

Like most parasites that your dog may catch, at the base of it all mites are just downright annoying and uncomfortable. They cause inflammation by digging under the skin, which can be very painful and generally create dry flaky skin and itchy spots. This can drive your pooch nuts with itching, gnawing and rolling around making the skin raw and open to infections.

Having mites does not necessarily mean a dog has mange, but most of the problems occur when mange develops, which is where all the scaly skin and itching comes from. Like a lot of canine skin diseases mange causes hair loss around the damaged areas.

In some cases the combination of skin biting and burrowing, along with scratching can cause painful blood loss and wounds, which again can leave your pet open to other diseases and infection.

Mites are also one of the most contagious parasites found in dogs and once one dog has it, its safe to say every other dog in your home also has it. They are also one of the quickest breeders meaning fast treatment is a must to keep the infestation under control.

The Demodex canis mite and its mange are far more common in puppies, elderly dogs and dogs with an immune system problem because they cant fight off the mange as easily as a healthy adult dog. Because the mites are already present on the dog they become more dangerous and breed easier when the dog is weak by age or has another illness that its immune system is fighting. Along with the itchiness and, inflammation and loss of hair, this type of mite often causes a red rash. This is the least severe type of mite parasite out of the two most common.

Even though they are not already present on the dog, the scabies mite is the most common out of the two and can cause discolored and thick skin and seepage of blood and pus on top of the other common problems. They are the more vicious and painful mite.

There is one more type of mange caused by mites which is a lot rarer and is known as Walking Dandruff, as the white specs and flakes are literally walking mites that resemble dandruff. They also produce dry skin and dandruff like flakes. This is the least severe out of them all and can be treated at home with shampoos. The technical term is the Cheyletiella yasguri mite.

Detecting mites is a little more difficult than other parasites such as fleas or ticks because they are not visible to the naked eye unless you use a magnifying glass, so it is more important to look out for the results of the mites and symptoms of mange. This however is quite easy and the usual gnawing, scratching, rolling on the floor and general discomfort associated with other parasites is present with a mite infestation.

Other things to look out for are dry and flaky skin, hair loss, inflamed or sore spots, seepage and cuts, and particular rawness around the ears.

If you are unsure if your pet has mites but know they are showing some bad symptoms then visit the vet for a diagnosis and treatment.

Preventing mites is not always possible; because how can you see them or know that other dogs have them? You can however prevent the spreading of mites by keeping secondary pets separate from the infected dog. To prevent any further infection from a bout of mange it is important to keep the dog clean, and to treat any wounds.

Although there are some mange shampoos for mild infestations it is better to visit a vet for initial treatment. They will then give you medication and instructions on how to use it in order to get rid and keep the mites away. It is common for the dog to be given a course of antibiotics and an oral pill or cream Ivermectin. You are also sometimes told to bath your dog in Ivermectin, but some dogs are allergic, in which case a peroxide bath, followed by an Amitraz dip is the next best thing.