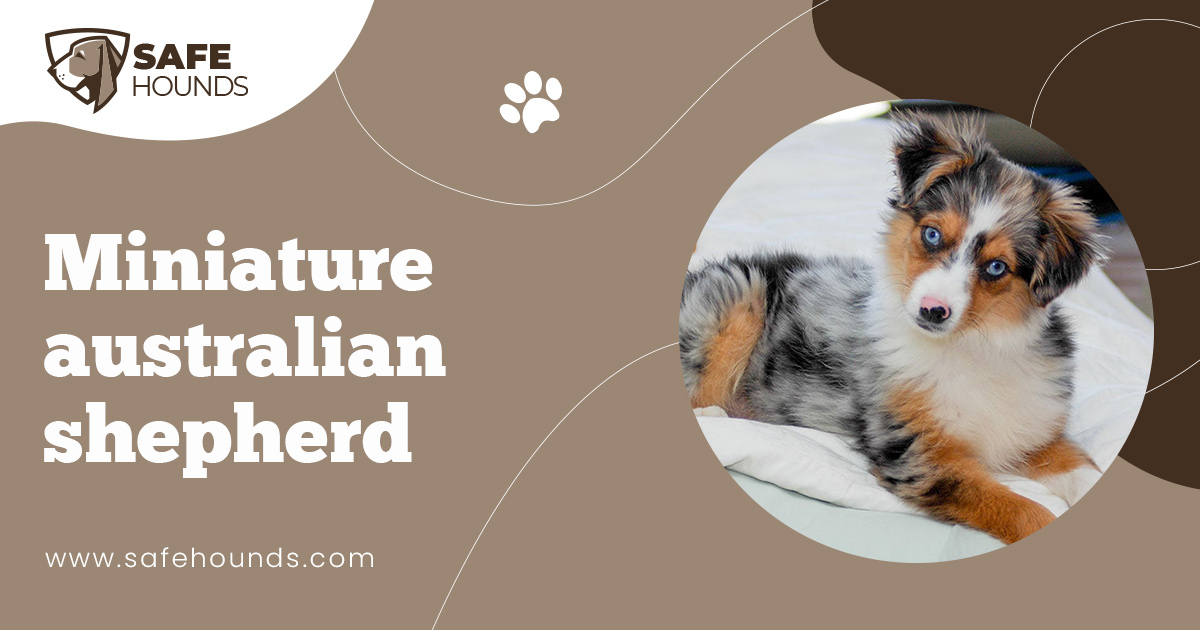 The Miniature Australian Shepherd is a handsome breed. With the solid red, black or the exotic blue and red merle coat, what the breed lacks in height is more than made up by the dogs well balanced admirable looks. The alert and intelligent expression of the mismatched gaze will never fail to earn the dog second looks.

A Miniature Australian Shepherd is an affectionate breed, a perfect choice for a dog lover living in an apartment. The dogs intelligence though can be its downfall. A Mini Aussie is a very agile breed. It also has a happy go lucky personality. This should make the dog a good candidate for agility training. However, apart from having a stubborn streak, the dog is known to manifest a shy manner at times. Training the dog can be a challenge. An owner has to remember that the dog is accustomed to working the sheep. Jumping and scaling obstacles, playing dead or rolling over can simply be beyond the dignity of the dog. Rather than a heavy hand, a lot of patience and a cajoling manner would make the dog respond well to training sessions. But apart from this concern, the Miniature Australian Shepherd is really the perfect pet that is if you will not be daunted by the need to ensure that the exercise requirement of the dog is met and you are not adverse to some dog hair in your clothes, in your furniture and even on your coffee.

Except for the size, the Miniature Australian Shepherd is identical to the standard sized Australian Shepherd. This well balanced dog has a square shaped appearance given that this is a very slightly longer than tall breed. A Mini Aussie is a double coated breed. The straight or slightly wavy top coat is moderate in length and rather coarse to the touch. Undercoats denseness and thickness varies with the climate. The head, ears, the front of forelegs are covered with smooth short hair. Longer hair at the back of forelegs forms moderate feathering. Hind legs have moderately full breeches. It will be noticed that males have more prominent mane and frill. Strong, rich and clear colors create more coat varieties and individuality of specimens. The more common coat colors are solid black, solid red (liver), red merle and blue merle. Dogs with white markings and copper points are truly impressive looking specimens.

The square shaped head complement the dogs square shaped body. Seen from the top, the skull appears to be flat. Its length is equal to the length of the muzzle. The muzzle that is well proportioned to the head slightly tapers to the rounded tip. A Mini Aussie has a moderate well defined stop. Strong white teeth meet in a scissor bite. Triangular ears with slightly rounded tips are set on high. Medium sized almond shaped eyes are set obliquely and showing an alert and intelligent expression. Eye colors range from blue, brown, amber or a combination of these colors. This breed has a well proportioned body. The medium length clean firm neck is slightly arched and set well into the shoulders. The muscular body has a level topline, a deep chest with well sprung ribs, strong broad loins and a moderately sloping croup. A Miniature Australian Shepherds tail should not be more than 3 inches in length.

A Miniature Australian Shepherd is a sweet tempered breed. This breed has a forever puppy personality making it an ideal choice for a kids playmate and companion. The dog will be a patient and loving protector of the children. This dog has an innate eagerness to please and seem to immediately know what the master wants. As with any other breed, early socialization and obedience training is necessary. A Mini Aussie is not dog aggressive but being a herding breed, it has the tendency to herd animals and people (especially strangers) by nipping their heels. These small individuals, unlike their progenitors would do well in apartments as long as the dog is provided with opportunities to exercise. A Miniature Australian Shepherd is no lap dog. This small dog will not be satisfied with being idle all day. These dogs need human attention. By keeping the dog occupied, the development of destructive behaviors will be prevented.

If you are considering having a Miniature Australian Shepherd for a pet, you have to be aware that this small bundle of joy would require high maintenance. The need to take the dog to a professional groomer weekly may not be necessary as you can do the grooming yourself. To maintain the good condition of the coat frequent thorough brushing will be necessary. This breed sheds heavily all year round so the vacuum cleaner will be your best friend. A Mini Aussie is a highly energetic breed. Being a working dog, it will appreciate being given a task to do. If the dog is kept solely as a pet be prepared to spend a lot of your time in the dog park.

An Australian Shepherd, a breed of herding dog attained enormous popularity after the Second World War when horse shows and rodeos became a widely accepted entertainment in the western part of United States. The Aussie as the breed is fondly called was introduced to the public through these riding shows. Australian Shepherds became even more popular when the dog was featured in Disney movies. Not many people know however, that the Australian Shepherd name is a misnomer. The Australian Shepherd is a made in America breed. These outstanding dogs are not even recognized in Australia. As what is customary, people cant get enough of a thing that is too good. Owning Tea cup dogs have become a status symbol. Miniature breeds are usually owned by the affluent. In 1968, Doris Cordova of Norco, California started the development of a miniature variation of the Australian Shepherd. The breeding program aims to develop a smaller bundle of the great package.