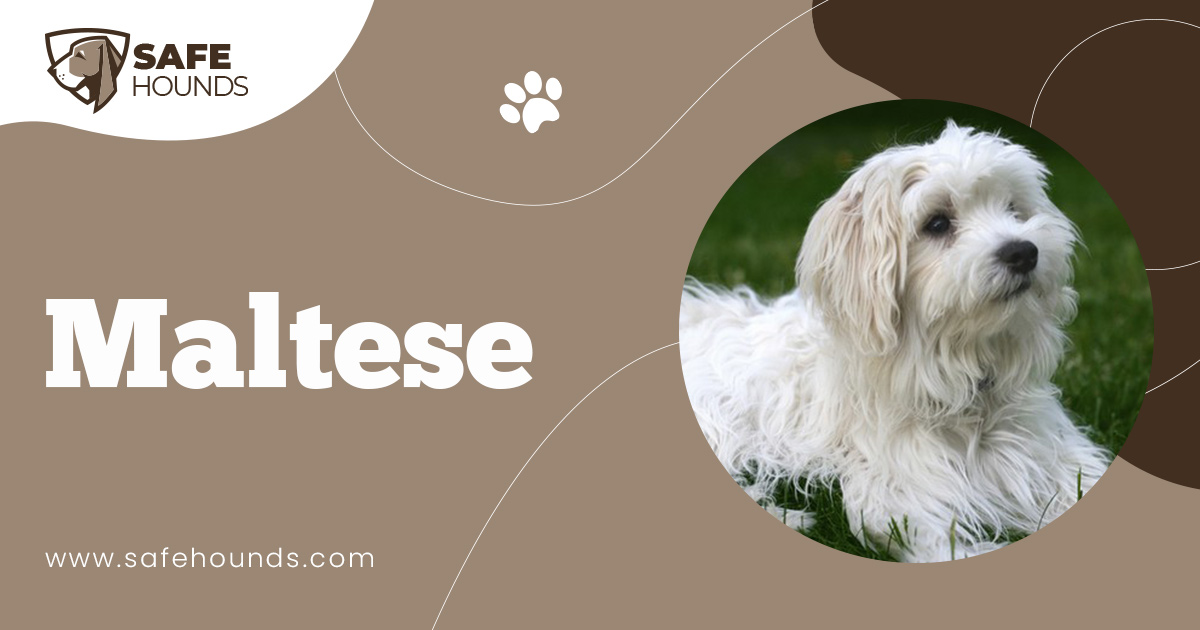 The Maltese is a member of the bichon family of canines. An alternate classification is of the toy group as well. The outstanding characteristic is the beautiful, long, silky, white hair. This makes the Maltese stand out to even the most casual adorer. It is one of the few dogs that characteristically do not shed.

This breed has been renowned as one of the most beautiful to ever exist. The best descriptions come from ancient poems written about these dogs. One was written by Marcus Valerius Martialis around the first century, Issa is more frolicsome than Catullas sparrow. Issa is purer than a doves kiss. Issa is gentler than a maiden. Issa is more precious than Indian gems Lest the last days that she sees light should snatch her from him forever, Publius has had her picture painted. Another was written by Ludovico Ariosto many years ago, The tiniest dog Nature has ever produced  Her coat of long hair, whiter than ermine, Her movements exquisitely graceful and Matchless elegance of appearance.

The Maltese is considered almost royalty. The breed appears to be old enough to date back into ancient history. Art depicting their image, predating Christ, have survived to this day.

The Maltese has a coat that is long, straight, and silky in texture. It features no undercoat. The coat is pure white or cream in color. The ideal, however, is white. It hangs evenly down each side from a central parting that runs along the center of the head and back from the nose to the root of the tail. It nearly reaches to the ground. Some may have curly or wooly hair, but this is outside the standard.

Other characteristics of the canine are: a slightly round skull, a black nose, drooping ears covered with long hair, straight legs, and a graceful, well-feathered tail. Eyes are fairly close, round, dark brown to black, with an expression of softness but still an alert intelligence. Like the head, the muzzle is medium in length and not overly wide or a thin.The droopy ear with long hair and very dark eyes, surrounded by darker skin that is called a halo gives Maltese their expressive, almost intelligent look.

Once the canine has soiled itself, the coat will inevitably lose its gleam. It is therefore a matter of time before the coat irreversibly fades or expires. The nose can fade and become pink or light brown. This is referred to as a winter nose. Increased exposure to the sun will eliminate this.

The Maltese weighs anywhere between three to ten pounds. Height is normally nine to ten inches from the withers to the ground. The body is compact with the length equaling the height.

Maltese are very energetic. Unlike most energetic dogs, they still do well in apartments and small homes. They are relatively easy to train and pick up new tricks and behaviours easily. These intelligent dogs learn very quickly. Given ample room, they enjoy a good game.

The breed is inherently good-natured but may be intolerant of small children or other dogs. They can be protective of their owner. They will bark or bite if their territory is infringed upon or if the approaching object is perceived as a threat.

For all their diminutive size, Maltese are relatively fearless. They are among the gentlest of all dogs. Despite this, they are just as lively and playful as one would desire in a pet.

Maltese have no undercoat. There is little to no shedding if the coat is cared for properly. They are considered to be largely hypoallergenic and many people who are allergic to dogs may not be allergic to the Maltese. Regular grooming is required to prevent their coats from matting.

Many owners will keep their Maltese clipped in a puppy cut. Some owners, especially those who show Maltese, wrap the long hair to keep it from matting and breaking off. Tear staining in the hair around the eyes or snout can be a problem in this breed. It is mostly caused by how much the individual dogs eyes water versus the size of the tear ducts. If the face is kept dry and cleaned daily, the staining can be greatly minimized. Many veterinarians recommend avoiding foods treated with food coloring and serving distilled water in lieu of tap water to reduce tear staining.

The Maltese is generally a healthy breed with few health issues. The few that do inherently plague the Maltese are luxating patella, portosystemic liver shunt, and progressive retinal atrophy (PRA). The average life span of the Maltese is 12-15 years.

The breeds history can be traced back many centuries. Some have placed its origin at two or three thousand years ago. Sir Charles Darwin of Evolution Theory fame placed the origin of the breed as far back as 6000 BC.

This ancient breed has been known by many names. Originally called the Melitaie Dog, it has also been known as Ye Ancient Dogge of Malta, the Roman Ladies Dog, the Comforter Dog, the Spaniel Gentle, the Bichon, the Shock Dog, the Maltese Lion Dog and the Maltese Terrier, mostly in different languages. Sometime within the past century, it was universally named the Maltese.

The Maltese is thought to have been descended from a Spitz type dog found among Swiss Lake dwellers. It was supposedly purposefully bred down to obtain its small size. Although there is also some evidence that the breed originated in Asia and is related to the Tibetan terrier, the exact origin is unknown. Maltese dogs are generally associated with the island of Malta in the Mediterranean Sea. They probably migrated to Europe through the Middle East with the movement of nomadic tribes. Some believe these older Maltese were used for rodent control before they were bred for looks. The Isle of Malta was a geographic center of early trade, and explorers most likely found ancestors of the Maltese left there and used them for barter for necessities and supplies.

The dogs were favored by the wealthy and royalty alike and were bred over time to be a companion animal. Some royalty that reportedly owned Maltese were Mary Queen of Scots, Queen Elizabeth I, Queen Victoria, Josephine Bonaparte and Marie Antoinette. At the time of the Apostle Paul, Publius, the Roman governor of Malta, had a Maltese named Issa. The poet Marcus Valerius Martialis, born in A.D. 38 in Bilbilis, Spain, made this attachment famous in one of his celebrated epigrams which is mentioned earlier.

It is said that the painting of the dog it refers to was so lifelike that one could not tell the dog from the picture. During the Renaissance, the poet Ludovico Ariosto describes a dog in a few lines of his literary masterpiece, Orlando Furioso, mentioned earlier. That dog is probably a maltese. (Vol.II Canto 43)

During the 1940s Dr. Vincenzo Calvaresi was one of the prominent breeders of the Maltese in the US His Villa Malta breeding program produced over 100 champions. Toni and Aennchen Antonelli (the Maltese) were the main force in establishing the Maltese breed in the US in the 1950s. Marge Rozik continued that program for years until her death in 1999. Debbie Martin continues it today.