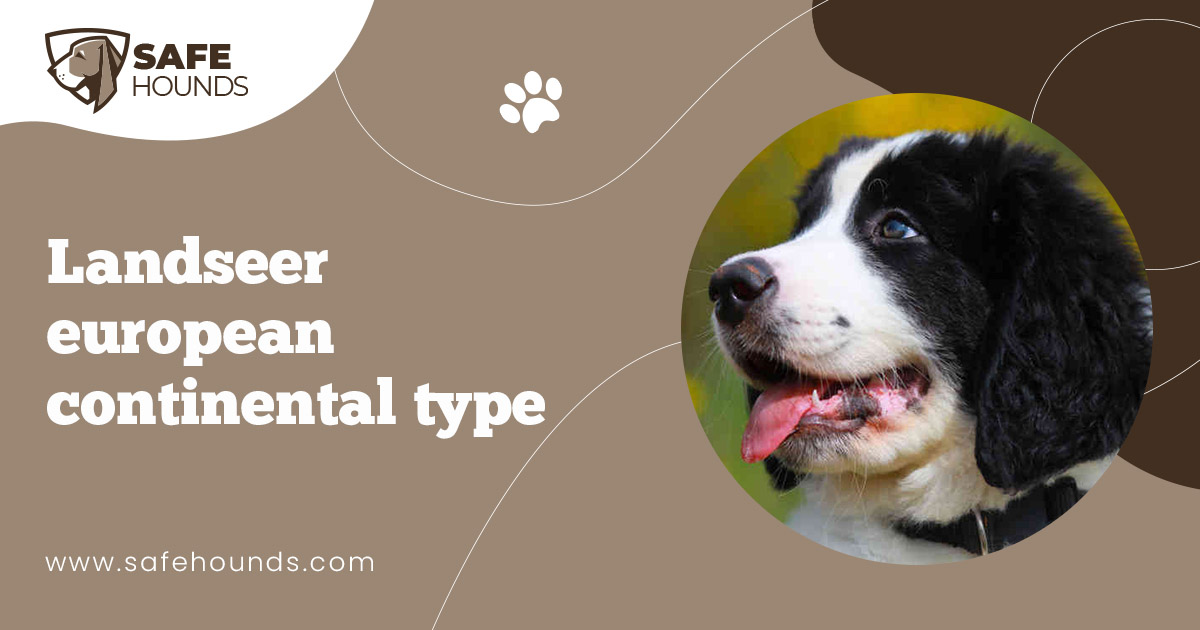 A large long legged white and black coated dog with a powerful well balanced body laboriously swimming to the shore, towing a drowning person is a Landseer. Stories abound about the valiant efforts of this dog in rescuing people from drowning. In fact, the breed got its name from Sir Edwin Landseer, a painter who commemorated the heroic deeds of a dog in rescuing its master from drowning. Landseers are definitely water babies. On a hunting or camping trip take care of allowing your pet to carry your sleeping bag on its back, not if you do not want to sleep on dripping wet sleeping bags as the dog would not hesitate to take a swim if you happen to pass a river or even a small creek.

The Landseer European Continental Type a dog that originated in Germany and Switzerland is considered by many kennel clubs to be a white and black coated variant of the black Newfoundland breed. The Landseer (ECT) however is a distinct and separate breed that is recognized by FCI. Being considered to be a variant of the Newfoundland, the breed almost vanished completely when the black coated Newfoundland become fashionable. The breeds existence was gravely affected by the 2nd World War. Thanks to the efforts made by German and Swiss breeders, the Landseer was revived in the 1930s. The dog that was developed by crossing the Newfoundland with the Pyrenean Mountain dog is lighter with a less heavy coat that would be a lot easier to care for.

The Landseer possesses an excellent nose. This breed is an outstanding retriever that is equally adept in retrieving from land or water. This breed makes a good guard dog too. This is a discerning breed. The dog would determine at once if the family is in danger and would not hesitate to stand between the family and the perceived danger. This is not a ferocious dog but it would bravely stand in front of the family member to confront the threat.

The Landseer (ECT) is a breed of dog that is often mistaken as a Newfoundland. However aside from the obvious difference in characteristics, a Landseer is comparatively taller than a Newfoundland. A Landseer is a beautiful large breed with a noble appearance. The massive head is closely fitted with a wrinkle free scalp. Finer short hair covers the head. A Landseer has a broad skull and a short but strong muzzle that appears to be squared off. A Landseer has a black nose. The brown to dark brown medium sized eyes are almond shaped giving the dog a friendly expression. The medium sized ears are triangular in shape and have slightly rounded tips. Set on high ears are covered with fine short hair. Longer hair at the back of the base of the ears forms fringes. Ears are carried flat to the sides of the head.

This breed has a broad muscular neck, a straight and level back, a muscular loin and a deep chest with well sprung ribs. The strong tail is densely covered with bushy hair. When the dog is at rest, the tail forms a slight curve at the end and hangs down. On the move, the tail is carried straight out with a slight curve at the end. This breed has a double coat. The topcoat is long, straight and soft to the touch. The slightly wavy topcoat is thick and oily. The thick undercoat is oily too. The predominantly white coat is marked with black patches on the body. The head is black and ears are black. A white blaze that runs from the muzzle to the collar enhances the impressive appearance of the dog.

The Landseer is definitely a Family dog. This breed would like nothing more than being close to its people. This large breed would prefer to be on the lap of a family member and to be lovingly patted. This affable dog makes a good and calm member of the household. It would not appreciate being relegated to a kennel or to the yard as the dog would prefer to be inside the home, to laze on the couch or in front of the fire where it can devote all its attention to the family. This gentle giant would be a great baby sitter. Gentle and tolerant, the dog would be a wonderful playmate and a dependable guardian of the children. This breed is protective by nature. The dog would immediately discern a dangerous situation and will act at once to protect the family. This dog is friendly to strangers, to other dogs and animals as long as it does not recognize threat to the family. A Landseer is a messy drinker, it drools a lot too. The dog sheds heavily twice a year. If you are a fastidious housekeeper, this dog is not for you. This is a very intelligent dog that is known to be easy to train, a plus for this large breed.

The Landseer is a large breed but they would do well in an apartment. These dogs are inactive indoors and can even be considered as couch potatoes. This is a lazy breed, content to laze inside the home all day. The dog enjoys swimming so much. The webbed feet make these dogs excellent swimmers. If swimming is not possible, a long walk would benefit the dog. These dogs are sensitive to hot weather. Exercising the dog is best done in the early mornings or early evenings when the temperature is cooler.

This breed has a thick double coat that would need thorough daily brushing. Line brushing using a hard brush would make sure that tangles are remover. Regular brushing will distribute the oils of the coat. Frequent bathing will not be necessary so as not to remove the oil that waterproofs the coat. Instead of bathing dry shampooing is recommended. Nails must be trimmed regularly. The dog has dewclaws that must be removed.

The Landseer is often confused with the Newfoundland. In fact in USA and in Great Britain these two breeds are considered to be the same. However, the FCI considers the Landseer European Continental Type to be a separate breed. This large white and black dog was portrayed in the famous painting A Distinguished Member of Humane Society done by the renowned animal painter Sir Edwin Landseer in 1838. This painter has done numerous paintings portraying large white and black dogs. The dogs were eventually named Landseer dogs in honor of the famous painter. The dog that was portrayed in the painting is a stray named Bob although the model used was a Newfoundland dog named Paul Pry. Legend has it that the dog and his master were shipwrecked twice. The first time, the dog was able to bring the master safely to the shore by swimming two miles from where the ship had sunk. In the second shipwreck the dog was not successful in rescuing the master and it swam to the shore alone. Bob became a stray that frequented the dockland to save drowning people. Because of the valiant efforts the dog was adopted by the Humane Society. In the 14 years of service the dog was credited with 23 rescues.

Bob is considered to be one of the large white and black dogs that have existed for over 200 years in the Newfoundland islands. These giant dogs that were utilized by the European fishermen to tow nets to the shore were brought to England. These dogs were noted for their ability to help drowning people. Large numbers of these breed were brought and sold by European fishermen in England. It was believed that the exportations of the dogs were done in the 1770s. However, it was noted that these dogs existed in England much earlier. A painting of the Earl of Romney portrayed a Newfoundland dog. Written extensive descriptions of the breed were made in 1732 in the book The Gentlemen Farrier. An History of the Earth and Animated Nature written by Oliver Goldsmith in 1774 extensively described the dog. Because of the impressive appearance the Landseer breed was portrayed in painting and has been the subject of numerous books.

Purebred Landseer dogs are noted to have stemmed from Germany and Switzerland. It was speculated that the breed was created by crossing the white and black Newfoundland with Pyranean Mountain dogs to create a dog that would resemble the dog in the painting done by Sir Edwin Landseer. Otto Walterspiel, a German breeder had selectively developed the breed. The first purebred Landseer was born in Holland in 1893. The second purebred litter was born in 1902 in Switzerland. In 1960, the Landseer European-Continental type, a dog that has longer legs and known to be more active than the Newfoundland was considered to be a separate breed by the FCI. This breed was registered under number 226. After the registration, the breeds popularity continued to soar. The breed conquered other European countries and can now be seen all over Europe.