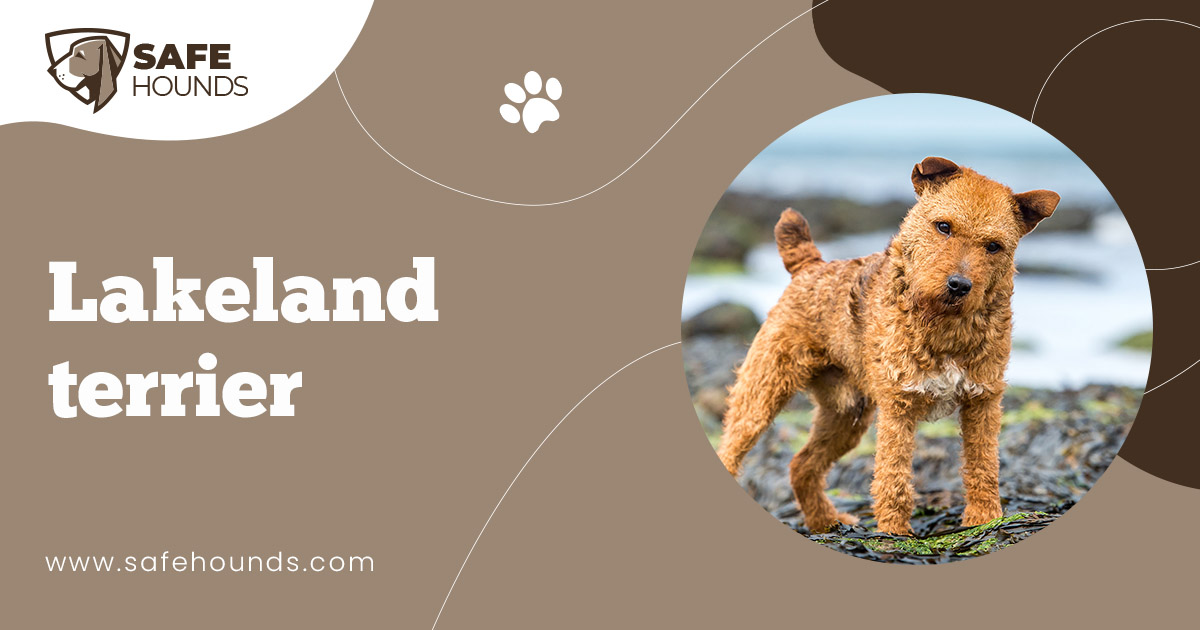 The Lakeland terrier was born to hunt. People used them mainly to hunt vermin in the rugged mountains of Northern England. His strong little body is very narrow allowing him to squeeze into tiny little holes to catch his prey. His longer legs make it easy for him to cover his ground quickly as well.

He is a happy little guy that has confidence, but still not overly aggressive to anyone unless threatened. They resemble a wire fox terrier, but still have their own unique characteristics. The Lakeland Terrier generally likes everyone they meet and can tell who is friend or foe. They will love playing with your family with his little tricks to get his own way make him a very entertaining pet to own.

This dog needs a firm hand when you train him. You must watch him because they will guard anything that is there including food and toys. So, watch it if a child goes near him while eating or playing with his toys. They tend to be stubborn when housebreaking but learn everything else very fast. You will want to make sure they are introduced to your other pets at a young age because when they get older they will chase them.

They love it when you take them outside to play and especially playing catch. They love to chase a ball, Frisbee, or stick. They do not need a large yard and seem to do well in the city with daily walks to the park or pet area. He will also love the free run of a large yard if you have one for him. Take him out in the woods and he is sure to chase a rabbit or squirrel as well.

The Lakeland terrier is a very strong dog with a good proportioned body with straight and strong legs. They have bushy hair on their face. Their teeth are overshot or undershot. The Lakeland Terrier has eyes that are either dark or a hazel color. Their ears are V-shaped and they fold over the face. They have a dark colored nose. Their tail is normally docked and when it is docked, it stands high on the dog.

The Lakeland Terrier has an outer coat that is hard and with the under coat as a liner, this helps protect the dog from bad weather conditions and brambles. Their coat color can come in many different ways such as black, black and tan, a reddish color, red grizzle, liver and blue, grizzle, wheat and grizzle, and tan. Normally the tan color is rich and dark, but with this breed, the tan color is like a straw color. Their coat is short except around the legs and face where their coat is bushier than the rest of their body.

The Lakeland Terrier is a happy, peppy, caring, loving, loyal, and an affectionate dog to have around. This breed loves kids and loves to play. They can make a good watch dog due to the fact they are a barker. They like to guard their toys, food, and practically everything else. When this dog is outside in a fenced area, make sure to watch out because this Terrier loves to dig and may escape under the fence. When they are young make sure to socialize them with other cats and dogs so when they are older they do not chase them around, which is one of their favorite past times.

When training this breed it can be easy as long as the dog loves to do the challenges. This breed may be hard to housebreak, but otherwise they are pretty good at learning everything. Make sure to be firm when training, so they learn what you are telling them to do.

The Lakeland Terrier is a good dog to have for apartment life. This breed is active indoors and can go without having a yard to play in at all. Now, if you have a large yard for them to play in, they will be happy with that as well.

The Lakeland Terrier is the type of breed that loves to play and run. Therefore, if you let them outside to do so then make sure you have a safe area to play in with them so nothing bad happens. This Terrier loves to play catch and other agility skills as well when outside.

The Lakeland Terrier shed hardly at all to next to nothing at all. Make sure to take your Terrier in to have their hair plucked around two to three times a year. This can be done by pulling out all the dead hair by hand or you can take them to your groomer where a professional job can be done. Make sure to keep the loose dead hairs out of their ears to avoid infections. Also, remove any long hairs in between the pads of their feet. If you are showing this dog, you will need more grooming care than normal.

In the olden days, the Lakeland Terrier was known as the Patterdale Terrier because of it being bred between the Bedlington and the Old English Wirehaired Terrier.

This little breed originated from northern England and was bred to chase off fox that bothered their flocks of sheep. His ancestors are the Border collie, the Bedlington terrier, and the Old English Wiltshire terrier. The Lakeland Terrier could hunt over any terrain and being a very good digger they would run into the fox hole to fight the fox and of course will the battle. The Lakeland would emerge from the foxhole and be victorious leaving his prey in the ground.

He can even out swim an otter. They used to have competitions between farmers when they had nothing better to do. Each would bring their dog to the lake and another would let an otter go and who ever got the otter first would be the winner.

Throughout history, the Lakeland Terrier was known for working along side hounds. The hounds would chase the fox into their holes, and then the Lakeland would enter the hole and conquer the battle. This was the best way in which to keep all kinds of vermin away from the farm. Many farmers lived a vermin free live shortly after adapting this hunting method. The fox still came around, but it even seemed like they knew a Lakeland Terrier lived there and they would take a path a long way around that farm.

One of the popular traits of these terriers is that they can work along side other terriers without fighting over the fox and tearing into each other. This trait is still bestowed in them to this day. They will take off after anything that gets in their sights and should be watched because they will also go after larger dogs if they feel they are a threat to his domain.