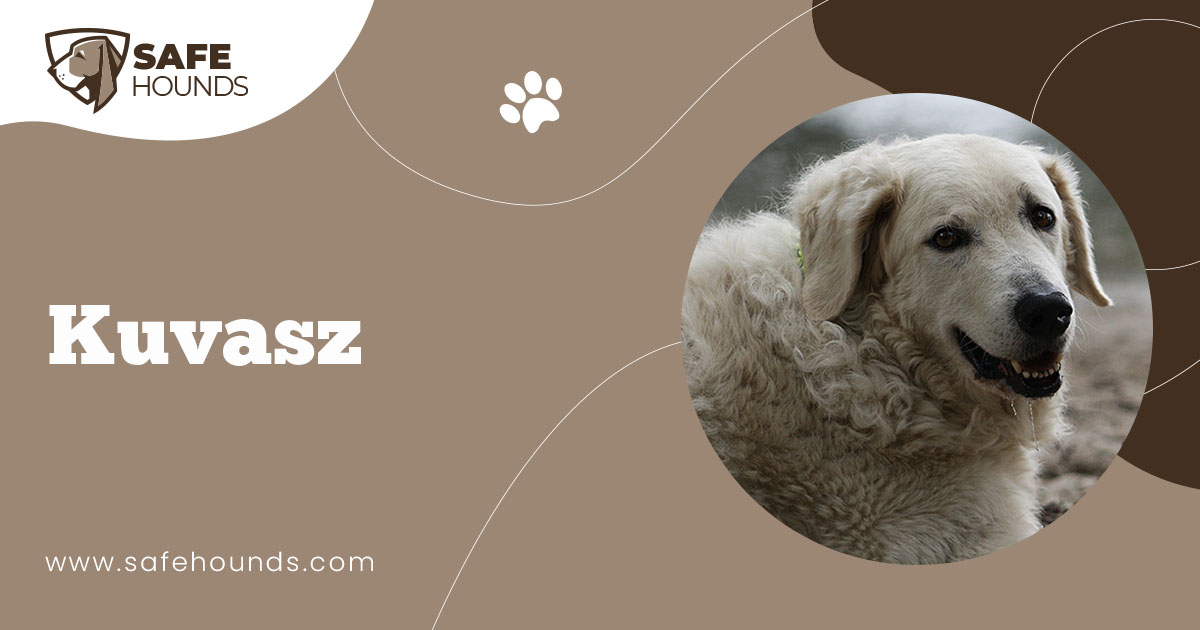 The Kuvasz has a beautiful white double coat that has a soft undercoat with the outer coat longer. The outer coat can range from being straight to wavy. You will want to look for dark pigment, black preferred. The eyes are dark brown and shaped like almonds. Their feet are almost cat like, round, and tight. There is absolutely no changes made to this dog and if there is, do not buy him. There should be no tail docking and no ear cropping. He should be longer than he is tall and he should have the one characteristic he is known for, the wedge shaped head.

The sizes of these dogs are about 28 inches to 30 inches for males weighing 100 to 115 pounds. Females are usually 2 inches shorter and about 10 pounds lighter than the males. There is no actually size they need to be, even for show, but they should be proportionate in balance throughout.

This is a very smart and intelligent dog that is very loyal to their family, even their pets. He will be your new security system. There will be nothing to stand in his way to protect his family. When you see a Kuvasz strength and the quickness of his running you would not think a dog of this size could move like that. He will make up his mind as to whether he will be your friend or not. You cannot make it up for him. Once they make up their mind they do not wish to be friends with a person, they will ignore that person. This just makes them nobler in appearance to some.

The Kuvasz dog is a big and well-proportioned sheep dog. This breed is a very handsome dog and beautiful dog to see. Their muzzle is broad and tapers down to their black nose. Their muzzle, however, is not pointed at all. The inside of their mouth and their lips are black. Their ears are folded and sit close to their heads. They have almond shaped eyes that are dark brown in color. Their dewclaws on the back legs should be removed and the dewclaws on their front legs should be left where they are. The Kuvasz is longer than it is tall and has a very muscular body. Their tail is carried low except when they are happy and excited then the tail will stick straight up.

Their coat is medium length with a thick undercoat. Their fur can either be straight or very wavy. Their coat color is white with a dark color skin underneath. They form a thicker coat during the winter months. Hair on the head and feet are short. Now with their body and legs the fur coat is wavy and can be around 4 inches to 6 inches in length. The back of their legs have feathered fur on them.

Being an intelligent and curious dog, they are very easy to housebreak. They are very quick learners, which cannot stand living in a smelly area. Training can be quick, but the Kuvasz is a bit on the independence side, so it may take awhile if they do not wish to do what is asked of them. The main reason this is true, is they were left alone to work and did not have to listen to their masters, as they were in control of their flock. He will not like the criticism of training when you scold him, however, do not treat him too callously or he may turn hostile towards you.

Your dog may be very protective of your children but you may have to watch him around strangers kids. To prevent anything from happening make sure he is supervised around your kids and their friends or keep them away totally. This is not a dog for playing with kids from the start. To stop this you should have this dog socialized from 6 weeks on to prevent this type of behavior. To better heed, this you should always get a puppy whose parents were raised with kids.

You must have him trained by an experienced, dominant person and he should be taught to welcome guests into your home. Everyone in the home should know how to handle this dog, not just one person. If you have him for your livestock then he needs special training for this type of work as well.

Make sure to give your Kuvasz good exercise. This will help keep him in shape and also to tire him out. If he becomes tired during exercise, he will be less likely to dig or chew up things. Good exercise will keep your dog happy and healthy.

Make sure to keep your Kuvasz brushed weekly. Do not bathe this dog due to the fact that their skin normally sheds off the dirt and grim itself. Bathing this dog will strip them of the oils that help the dog stay clean.

Make sure to check behind the ears for any kind of matting the dog may get. When the dog is in cold weather, he will only shed seasonally. Now, if the dog lives in warm or hot weather the dog will shed all year around.

Kuvasz are thought to be a Hungarian breed of dog because they have found evidence of them as far back as 2000 BC in Tibet. When the Magyar tribes re-established into the Carpathian Basin they had Kuvasz type dogs with them. At that time, they were used to guard livestock.

There was a dramatic discovery in 1978 where a fossilized Skelton of a Kuvasz was found in Fenekpusta. That skeleton was almost identical to the modern Kuvasz and if this were accurate then it would mark the oldest identifiable breed dated beyond the 9th century.

When the Magyars began their settlement, they converted to a more conventional lifestyle, which included animal husbandry. They had two separate breeds to use, the Kuvasz was used in the wet pastures, and the Komondor was used in the dryer pastures.

During the 15th century, the Kuvasz became a member of the royal court of King Matthias. He said he trusted his dogs more than anyone of his council members. He even gave puppies as gifts to visiting dignitaries as a royal gift. When the King passed away, the dogs breed went downhill slightly, but you can still find it in its roles of protecting the livestock.

Once again the breed was almost driven to extinction like many other dog breeds because of war. When the dogs held their stand against soldiers the dogs were killed and then the families as well. A few soldiers would take puppies home with them without any type of authorization from officers. Other Kuvasz left behind would die of starvation. It is said after the war ended you could only find maybe thirty of these dogs in Hungary.

It took dedicated breeders to repopulate the Kuvasz in Hungary, but the genetic pool was severely compromised because of near extinction. It is believed the Kuvasz that did survive were taken to Pyrenees to continue breeding. Though descendants of the early Arabian wolf, the Kuvasz maybe one of the ancient breeds. There have been scientists that have found archeological remains in what is todays northern region of Iraq in 6600 BC although they have been thought to exist as early as 9000 BC.

How did the Kuvasz get its name? They say they borrowed their name from the farmers of Russia that were called Chuvash, who took care of the Kuvasz for many centuries.