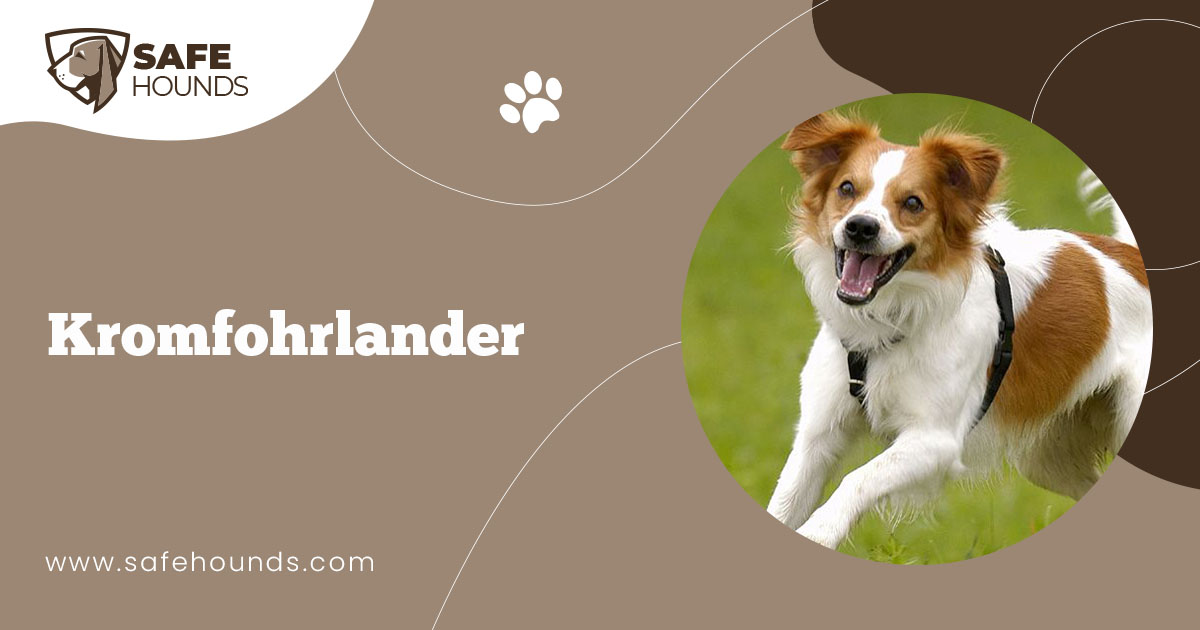 The Kromfohrlander is a breed of companion dog that was developed in Germany after the Second World War. This relatively young breed was developed by accident in the early 1950s. The accidental mating of two mutts resulted in a litter of beautiful puppies of uniform type. From then on the dogs were systematically and deliberately bred and developed to be a family dog. Owners of Kroms have to thank Ilse Schleifenbaum for developing this excellent breed of family companion. This breed has a rather vague ancestry but a Fox Terrier and a Grand Basset Griffon Vendeen are the breeds speculated to be the ancestors of the Krom.

A Kromfohrlander is a beautiful breed. A potential owner can choose a long haired, a short haired or a wire haired Lander. The dogs predominantly white base coats eye-catching appearance is enhanced by a brown or tan saddle or variedly sized and shaped markings of the same color.

This breed is a wonderful companion dog a Krom was purposely developed to be a family pet. The dog is highly valued for its loyal, loving and fun loving nature. This vivacious and cheerful dog is intelligent and adaptable as well. The dog is the ultimate family companion. It forms a strong bond with the whole family but it tends to choose a favorite person. Being intelligent, the dog trains easily but it is noted for its stubborn streak. A Krom will obey only when it suits its fancy. However, if the dog has chosen you to be its favorite person, the pet will be at your beck and call.

This breed is believed to have a working terrier ancestry but throughout its history, the Krom had never been a working breed. The dog is always ready for adventure but it prefers being with the family over hunting or chasing prey. The dog is completely disinterested with hunting. Hares, rabbits and other prey on the dogs path will be totally ignored by the dog.

A Kromfohrlander is a medium sized breed of companion dog that looks like a retriever and a beagle cross. This breed is about 15 to 18 inches in height and weighs from 22 to 31 pounds. The Krom as the dog is fondly called by its fans comes in a variety of coat types so that it is quite common to see a long haired or a short haired dog. Believed to have a Griffon for an ancestor, wire haired Kroms are also seen. Rough coated individuals have longer hair on the face. Longer hair on the muzzle forms a beard. Hair is about 3 cm on the sides of the body and longer on the withers and back but not more than 7 cm. A smooth coated Krom has thick smooth hair that lies close to the body. Similar to the rough coats, the withers and the back of smooth coated individuals are longer too but not more than 7 cm as well. Longer hair covers the ears, the underside of the neck and the chest. Tail of this type is beautifully plumed. The sides of the forelegs as well as the upper thighs have distinct featherings. Hair on the face and muzzle is short. Both coat types have soft and short undercoat. This breed typically has a tan, light or dark brown coloring on the head. The bodys white base coat either has a saddle or marked with variedly sized tan and brown patches. Brown hair may be tipped with black.

The Kromfohrlander is a slightly longer than tall breed. The slightly rounded skull is equal in length with the muzzle. The straight nasal bridge is moderately broad. Nose that can be black or brown has well opened nostrils. Jaws are strong. Complete set of strong teeth meet in a scissor bite. Oval medium sized eyes that are set slightly slanting have medium brown or dark brown irises. Very mobile ears are set on high and carried in a semi-drop fashion. Ears are triangular in shape and have rounded tips. Medium in length, the strong well muscled neck is slightly arching and covered with close fitting skin. This breed has a strong straight back. Moderately broad and deep chest has slightly rounded ribs. Tail is carried over the back in saber style when the dog is in action and hangs down when the dog is at rest.

A Kromfohrlander excels at being a family companion given that it was purposely developed to be one. This breed makes a wonderful companion especially of the children because apart from being very friendly and playful, the dog has so much love to give for its human family. This is not a dominant breed. It tolerates other dogs and other pets of the family. This friendly and gentle nature though is not extended to strangers. This dog is distrustful of strangers and will never fail to alert the family once it has detected even the slightest unusual sound. This is why early socialization is necessary. The dog is distrustful of strangers but once socialized, it will learn to discern a friend from an intruder. Obedience training is necessary as well. Remember, this is an intelligent breed and it can easily spot the owners weakness. Owners therefore have to be consistently firm with the dog. A Krom is a highly adaptable breed. The dog would do well in a home in the country or in an apartment in the city as long as the dog is given sufficient opportunities to exercise.

The Kromfohrlander is one of the cleanest dogs. This breed is totally devoid of unpleasant doggie smell. This is very important given that the dog is first and foremost a family companion. Brushing the coat of these dogs regularly would be more of a bonding time between owner and pet rather than a grooming session. These dogs are not heavy shedders, nevertheless, brushing would remove dead hair from the coat. The dog can be bathed when it gets extremely dirty. Frequent bathing should be avoided so as not to strip the natural oils from the dogs coat. This breed has a hereditary stifle joint disease. But a Kromfohrlander is generally a healthy breed with an expected life span of about 16 years. This is not a highly energetic breed but a Krom has the canine primal instinct to walk thus an owner has to ensure that the dog is taken out for long walks or given the opportunity to run off leash in a large well fenced area.

The Kromfohrlander is one of Germanys most recently developed dog breeds. This breeds story begins after the Second World War. In 1945 American troops marching through France have picked up a stray, a brown and white shaggy coated dog which is probably a Grand Basset Griffon Vendeen or a similar breed. Named Peter, the harsh coated dog was made the mascot and has accompanied the troops as they pushed their way through Germany.

At Siegen, a Westphalian town in the region of Krumme Furche, the dog jumped off the army truck. Peter, at that time was an underfed and dirty mutt. A German woman named Ilse Schleifenbaum took pity on the dog. The dog was brought home and became a much loved pet. The dog became attached with Fifi, a terrier bitch owned by Mrs. Schleifenbaums neighbor. A litter of puppies was produced. Fifi was of an unknown ancestry although it was speculated that the dog has a Fox terrier ancestor. Because of the mixed origins of the dogs, it was expected that a mixed bag of puppies will be produced. Surprisingly, the litter was of uniform type. Additionally, the puppies are so appealing that Mrs. Ilse Schlefenbaum had decided to use the puppies as foundation stock for the development of a new breed. The Kromfohrlander (pronounced krohm-for-land-ur) was born. Breed name was derived from the Krumme Furche region where the dog was developed. In modern German, krom fohr means crooked furrow.

The Krom or the Lander, as the breed is affectionately called by breed enthusiast was already established ten years after it was developed. The breed was first recognized by the German Kennel Club. Soon after, the Krom has gained international recognition when it was accepted by the Federation Cynologique Internationale. The breed was first shown in 1955.

The Kromfohrlander is a perfect home companion and pet. The dog is believed to have a Fox Terrier ancestry but it has never developed into a working breed. The breed has always been kept as a pet because of its loyal, fun loving and devoted temperament. At the end of the 20th century about 1,000 Kroms are in existence. About 75% of the dogs are found in Germany. Some dogs are seen in Holland, Switzerland and Finland but the breed is relatively unknown in other parts of the world.