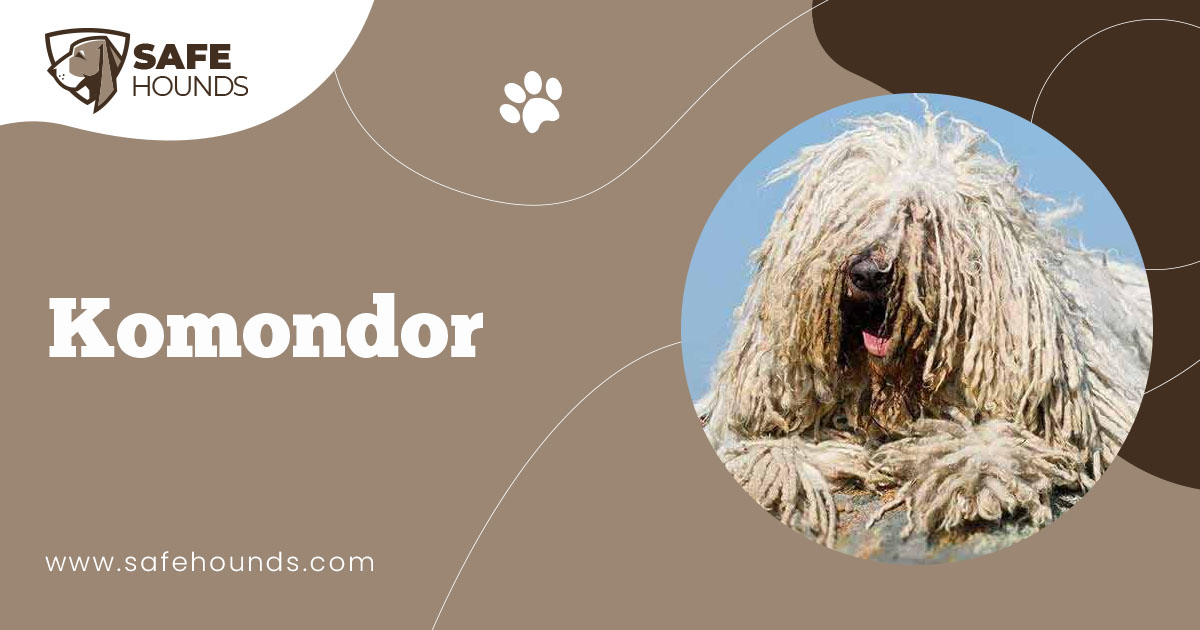 The Komondor was raised as a livestock guardian. The Komondor received their possessive behavior in this way. This is also a reason for their corded and white coat that they are very well known for. Their corded white coat helps them blend in with sheep. It also helps protect them when and if they get into a fight with enemies that may hurt their livestock, family, or whatever territory they may be protecting. Their white corded coat is also a favorite in dog shows. Their coat is one of the heaviest coats in the canine world, as of today.

The Komondor is a wonderful dog if it is trained and socialized at an early age. This will help them to get along with kids, other household animals, and to do better when strangers come to the house. They will bark to let you know if someone is around. Many people say that this dog is not much of a family dog as they were developed to protect sheep and pretty much be alone.

The Komondor is known for one major thing and that is its coat. The coat on the Komondor is always white in color and has a felted and corded coat. Their coat is very unique and very thick. When the Komondor is a puppy, their coat is short, wavy, and fluffy. The corded coat can hang anywhere between 8 to 11 inches long. The cords can form until they reach 2 years of age. However, for the coat to be as long as desire for dog show, it can take up to five years. The way the cords form is from the outer coat fusing with the undercoat to make up of the cords that hang down.

This dog has a massive body. Their head and muzzle are fairly big as well but are short in length. They have dark brown eyes and U shaped ears that hang down. Since their ears hang long, they naturally blend in with the coat and the rest of their body. Their tail hangs straight down as well, creating another blend. The Komondor has a scissor type bite, very strong and powerful. Their body is very powerful and very muscularly built. This is a very big dog and might be very intimating.

The height of the males and females ranges anywhere from or between 25½ inches and higher. The weight for this breed is up to 125 pounds. For the females, the weight is about 10 percent less than the males. Remember, the females are always smaller than the males.

The Komondor is a very protective, alert, and serious type of dog. They protect at any costs. Throughout history, they were raised specifically as a livestock guardian and then have the tendency to defend whatever they are put in charge of, even to their death. This means they protect their family, house, car, yard, and also livestock as well. This type of behavior puts strangers and other animals at risk if they enter unannounced. When having this dog for a family dog, you must at least socialize them very well for them to be raised not to attack people and other pets in the home. You must have experience in training to handle these dogs. If you do not know much about training, then taking them in to a professional will be even better. If you have children, you should raise the Komondor along with them to allow the Komondor the chance to learn they are family. They will also learn to protect the children as well, so be careful with neighborhood kids. Accidents can happen where the Komondor may think another child is aggressive toward a family member, thus they will attack to protect their family member.

The Komondor can live in and apartment lifestyle as long as they are taken out daily for exercise. This breed does the best when living in a nice country environment. Weather conditions are not a major concern, as the Komondor can do well in any climate. However, high temperatures can be a problem if they have to place to stay cool.

The Komondor is a very easy dog to take care of. Their coat never needs to be brush or combed as to the fact that they have corded hair. Make sure to keep the dog bathed at all times as to the fact that their corded hair gets dirty easily. When bathing this dog, their coat takes a long time to fully dry. The Komondor sheds very little to none at all. Their cords can be kept trimmed as well. When the Komondor is not kept clean on a regular schedule, their coat color can turn and off white color.

If this dog is kept outside, it will find its own way for exercise. Now, if you have your Komondor for an inside dog, then make sure to take them outside for walks or to run around. This breed can be lazy indoors, lie around, and sleep for hours.

Many have thought at one time the Komondor was from the Magyars, but recently archeologists have found they have come from the Cumans, a Turkic speaking people now from China. Before that time, graves in Cumans uncovered the remains of several dogs and horses. The dogs were identified as the Komondor according to Horvath.

Their coat many say began with the origin with the Puli and the bergamasco and others say it might be with the Russian livestock dogs the Ovtcharka. The coat provides their protection against the extreme cold temperatures, but they do not do well in wet climate.

They are built for guarding the livestock and with the corded coat, they blend in well with them. The coat also provides protection from wolves and other animals.

World War II began the downfall of the breed like many others where they were killed off when the Nazis took over a house they had to kill off the dog to get to the people.

When the Komondor guards their flock at the first sign of danger all the sheep congregate behind him and he will fight to the death to protect them. Early Europeans have thought their might be a cross with a wolf to give them that fierceness. This is where their coats come in, as much as it protects from the elements it also protects from much damage in a fight. In addition, its looks with the corded effect make it quit unusual.

Many of the United States sheep ranchers have been using Komondors to protect their flocks from coyotes, which have killed off more than a million of their sheep every year. They have seen dramatic results in the loss of sheep since using a Komondor.

Coming to America in 1930s it is now recognized by the Canadian and American Kennel Clubs, however, the breed is not recognized in Great Britain as of this day.