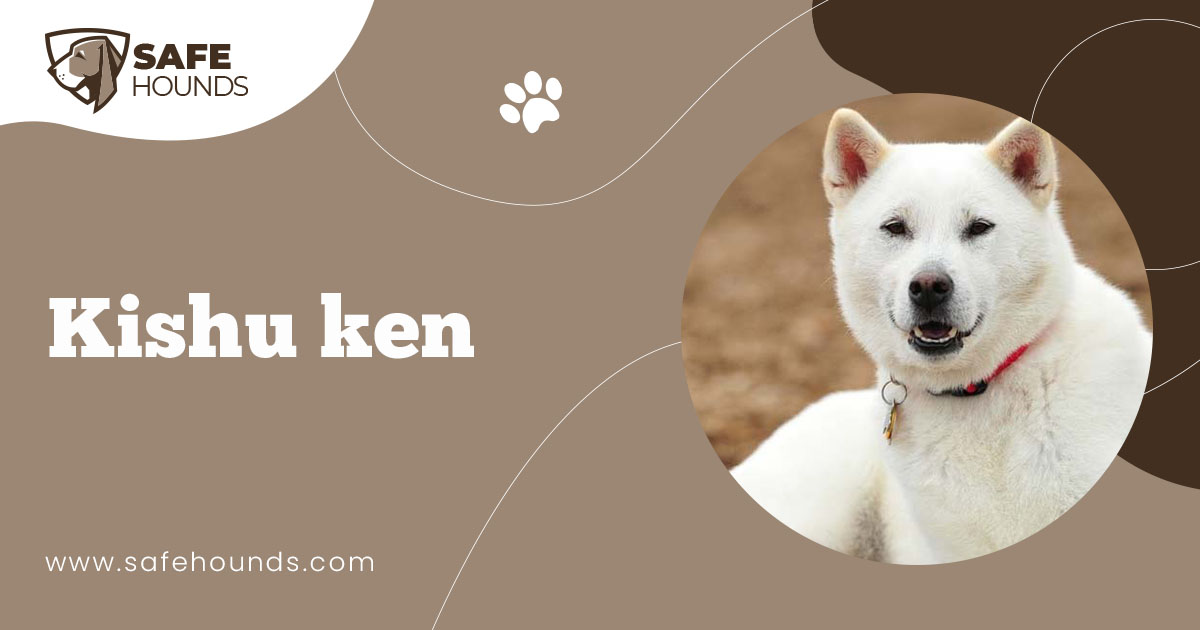 Centuries ago it was said that Japanese had wanted a perfect dog. The dog should be clean thus it should be white and already housebroken, to be able to help the master, the dog has to be an excellent hunter and above all the dog should be intelligent, loyal and faithful to be a family friend and pet. The perfect dog created was named Kishu Ken, ken being the Japanese word for dog.

Kishu Ken also goes by the name Kishu or Kishu Inu. This is a very ancient breed of Japanese dog that predates recorded history and believed to have existed earlier than the Akita and the Shiba. Kishu Ken took its name from Kishu, the mountainous districts in Wakayama and Mie Prefecture where the dog was originally bred as boar and deer hunters. Because of the dogs appearance it is believed that Kishu Ken is related to the Kai Inu, Shikoku dog and the Hokkaidu Inu although the latter has a shorter body.

Kishu Ken is a medium sized dog that stands about 17 to 22 inches tall (measured at the withers) and weighs from 30 to 60 pounds. Often times the dog is mistaken for a Jindo, the Korean white dog and the white Hokkaido because of the dogs coat is predominantly white. There are also red Kishus and some would have brindle coats but white is the preferred color. Moreover, only white Kishu Ken dogs are entered in dog shows.

At first the Kishu Ken dogs would have sesame, red or brindle coats but after 1934 when the dog was designated as a one of Japans natural monument, only dogs with solid white colors were accepted. Currently, although white coats are considered to be most common, other colors like sesame and red are accepted. Being a natural monument, export of the breed from Japan is extremely restricted. As there are only 2 known breeders of Kishu Ken (one in Texas and the other is in Europe) this breed can rarely be seen in Europe and in North America. If you are fascinated by this breed you have to travel all the way to Japan to see the magnificent Kishu Kens.

The Kishu Ken is listed in the Foundation Stock Registry of the American Kennel Club and internationally recognized as a rare breed of working dogs.

The Kai Ken, the Shikoku as well as the Kishu Ken are considered by the Japanese as their scarred glory. These dogs belong to the Shika Inu or the medium sized category of dog breed that were used by the matagi (professional hunters) to hunt deer and boar. Hunters during those times use the firelock, a firearm that would only fire once. To be fired again the firelocks would need to be reloaded. A boar that was not fatally wounded may charge the hunter. These dogs are known to bravely face any kind of danger. They would courageously interfere and get in the way of the charging wild boar to give the hunter time to reload.

As aforementioned, Kishu Kens are medium sized dogs. It was speculated that the breed has descended from ancient medium sized dogs. The dogs body is compact, well boned with highly developed muscles. The back is straight, the loins are very muscular. Dogs chest is deep, belly well tucked up and the ribs are quite well sprung.

The dog has a wide forehead, tight lips that enclose strong teeth with scissors bite. The wedge shaped muzzle is rather thick and tapering. Small and triangular dark brown colored eyes are set wide apart. Rather small triangular ears are pricked and inclined forward. The neck, like the rest of the body is muscular. The set on high tail is thick with the tip almost reaching the hocks. The tail may be curled or form a sickle over the back of the dog. Black nose is most common on a white dog while red or brindle dogs would have either pink or brownish colored noses.

The dog has a double layered coat that is most useful in winter. The outer one is straight and rather harsh to the touch and the under coat is very soft and dense. White coat color is preferred but some dogs are red or brindled.

Similar to the ancient Japanese philosophers, the Kishu Kens have dignified and noble appearance. These are silent dogs that give the impression of being preoccupied and lost in thought. Even when hunting, these dogs would be quiet. This enables the dog to stalk prey more effectively. Kishu Kens are brave, courageous and powerful hunters that are most prized by the Matagi. These dogs are fearless even when confronted with wild boars that are much bigger that their size.

Hunting for food is no longer necessary these days but present day Kishu Kens still possess the innate bravery and intelligence of the Kishu Kens of old. These dogs still possess the strong prey drive but now the noble dog has another role in the lives of dog lovers that of a watch dog, guard dog and that of a loyal home companion. House breaking these dogs would be a breeze as apart from being naturally clean, these are highly intelligent dogs that would be easy to train.

They make excellent guard dogs as they are wary and reserve with strangers. It would not be uncommon to see a Kishu Ken perched on an elevated place, silent but always alert, keeping an eye on everything ready to act at the slightest sign of danger to the human family. These dogs would form an attachment to the members of the family, they are known to be good and gentle with the children but these dogs are one-master dogs.

Kishu Kens are pack hunters thus they would do well and tolerate other dogs. However these dogs still possess a strong prey drive that makes them unsuitable to be around smaller pets. Kishu Kens that are not properly socialized should not be unleashed when taken for a walk as it would not be surprising to see the dog climb a tree to trail a prey. Socialization therefore is a must, preferably from puppyhood to familiarize the puppy with new sounds, new environment and new situations. The puppy will also be presented to other smaller animals.

Kishu Kens make excellent house pets but being working and hunting dogs, they would need to be exercised regularly. The dog should be taken on long walks or runs. A home in a rural environment or a suburban home with an ample fenced yard would be most suitable. The dog will be given the chance to roam and run freely. An apartment would not be a suitable dwelling for this dog in the same manner that a first time dog owner would find the dog a handful. A Kishu Ken owner should be dog-experienced as this breed is intelligent but willful. These dogs are pretty headstrong and keeping them leashed in an apartment can be a problem. As mentioned, these dogs would need to be sufficiently exercised, if not the owner would have an extremely bored dog in his hand. Given the chance, a bored dog would run away and be destructive.

Because the Kishu Ken has been kept relatively isolated, the breed was kept almost pure and healthy. Sufficient exercise, the correct food and proper maintenance will ensure that the Kishu Ken will exceed its life expectancy of 11 to 13 years.

Because of the nature of the coat, the dog would need to be brushed at least two to three times weekly to ensure that the coat is kept clean and mat free. Kishu Ken sheds heavily twice a year. During these times, the coat should be brushed daily to remove loose dead hair. Ears must be checked regularly to remove dirt and wax build up to prevent infection. Bathing should be on a necessity basis only. Nails must be trimmed every two weeks.

Kishu, the mountainous area south of Osaka is the home of the Kishu Ken. These dogs that were developed thousands of years ago were originally used as wild boar and deer hunters by the Japanese. These are quiet dogs that would not bark until the prey is caught. The matagi (hunters) in the Wakayama and Mie prefectures highly prized these dogs not only for the dogs excellent hunting abilities but also for the dogs courage that has save a lot of hunters lives. These dogs are known to stand between a charging boar and the hunter.

Ancient Kishu Kens have white, red and brindle coats but the white coated dogs are most often used in breeding. This is because hunters prefer the white for easy visibility. Kishus are working dogs and they preferred more for their usefulness.

Mr. Harou Isogai, a breeder has made the efforts to categorize all the Japanese breeds. In 1930s, all the breeds were classified. The Kishu Ken breed was distinguished from the other Shika Inus. Before 1934 there were still a number of spotted Kishus in existence but due to the preference for coats with solid colors, the spotted Kishu Kens have disappeared by 1945. The breed was recognized by the Japanese Kennel Club in 1934.