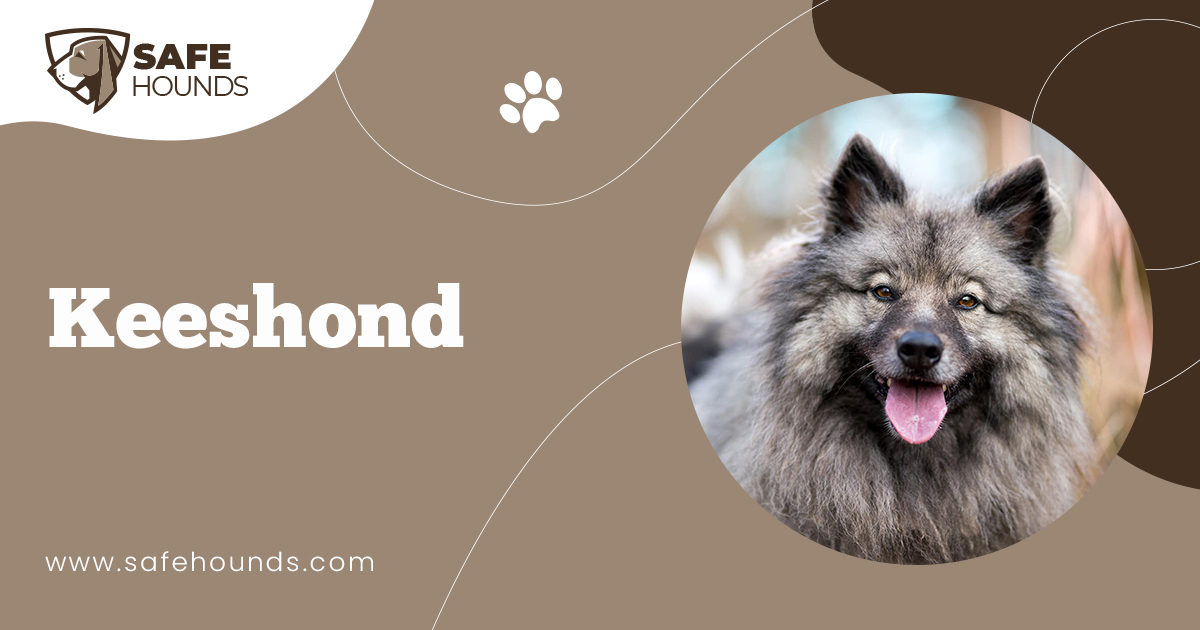 Keeshond can claim descent from the Chow Chow, Elkhound, Pomeranian, and the Samoyed, having an arctic origin. They were known as a dog of the people in the 18th century. They are a powerhouse of energy with chestnut eyes, erect triangular ears, and richly plumbed curled tail. Keeshonds have a very thick coat around its neck, shoulders, and chest that looks like the mane of a lion. Hind legs have a trouser like hair formation with thick, short hair.

The coat has a cream or pale grey colored undercoat, the outer coat comes in shades of grey, and hair always stands away from the body. This gives them a ferocious, vivacious look. The advantage of this kind of coat is that it always looks washed and combed. They have distinctive markings around the eyes.

Keeshond is preferred as pets because of their ability to become a successful childrens companion, as they are lively, alert, and intelligent dogs. They need to be trained gently, but are quick learners. When they become excited, they have a tendency to spin in happy circles. Naturally affectionate and outgoing, Keeshond loves everyone in the family and love to participate in all family activities.

During the past century, they were extensively used on Dutch boats as a dog of all jobs, as they are good guard dogs due to their notable gift of warning of danger. One thing that all owners should be wary of is that they gain weight easily so be wary of overfeeding them.

Keeshonds look a lot like their ancestors, the Samoyed. Keeshond is a medium sized dog with proportionate body, which is sturdy. The dogs stand between 17 to 19 inches and weigh around 35 to 45 kg. Females are 10% less in height and weight. It has a pale grey or cream-colored undercoat and has a luxurious outer coat in different shades of grey, black tipped, and stand up on the body. With standing coat hair, it gives an impression of being washed and combed. The head, muzzle, and ears have very soft smooth hair that is velvety in texture.

It has a long and feathered tail that lies flat and close to the body. The tail is set high and generally, lies curled at the back. There are markings around the eyes as distinctive pale spectacles. It has chestnut eyes with triangular ears that stand erect on the head. The muzzle is medium size with black lips that are closely met in the scissor bite. Keeshonds due to their thick coats do not prefer heat and should be kept as pets in cooler climatic places. They are fairly active indoors, but a yard should be there for exercising.

They have standing hair on the body and a spectacular ruff from the throat to the chest like the mane of the lion, giving it the right appearance of a vivacious animal. Due to the instinctive behavior of alertness and warning of danger with the good appearance, they are often used as watchdogs. Though they may appear ferocious, generally they are pretty fun loving dogs who can mix in well with all age groups.

They are a good companion for children, as they love to play, are intelligent, and alert dogs. They are quick learners and should be trained gently and patiently. They have a lively personality and often run around in circles when excited. They are affectionate, friendly, and outgoing breed of dogs.

Keeshonds are also used as performing dogs if trained well. They get along well with all age groups of people thus actively participate in family activities. Other pets are safe with them so you can have a variety of pets at home. They are good as watchdogs, thanks to their looks and instinctive knowledge of warning about dangers looming ahead.

Looking after the Keeshond is not difficult. They need to be brushed with a stiff, bristle brush daily for a well-groomed look. Professional grooming services can be used sometimes. Bathing and shampooing is essential according to need. The undercoat is dense and sheds at least twice a year very heavily. They tend to gain weight very fast so overfeeding may pose health risks.

Exercise is very important and a house with an average yard is preferred. A choke chain should not be used, as it spoils the beautiful ruff on the throat and the chest. Their life expectancy is about 12 to 15 years and over exercise, causes trick knee problems.

This breed served for many years on Dutch boats or Rijinakens, on the river Rhine. It originated in the Artic area and its ancestors can be traced to the Chow Chow, Elkhound, Pomeranian, Samoyed, and the Finnish Spitz. It was also known as the dog of the people. It was originally used to guard canal boats and known as the Dutch barge Dog, but in England unkindly called the Overweight Pomeranian. The over all appearance has not changed for the past few centuries.

It was in the limelight during the 18th century as the mascot of the Patriots and when the Prince of Orange established his dominance, people did not want the dog, which stood for loyalty towards him. Thus, the breed was quietly disposed of and very few remained. They were only found in many farmhouses and with river boatmen.

They again came into prominence after the Baroness investigated about the breed to learn many had survived the massacre. It was after this effort put in by the Baroness van Hardenbroek in 1920s to start breeding them once again. within 10 years the breed became so popular that the Dutch Keeshond Club was established.

In 1925, the Keeshond made their appearance in England and quickly became very popular and was accepted by the American Kennel Club in 1930.They were generally imported in the United States from England, Holland, and Germany and breeding in the USA started after that. They are now one of the best-known dog breeds that are domesticated and kept as pets.

It is their versatility in nature, alertness, and intelligent behavior that has them being used as guard dogs. They have the ability to be trained easily and fast so they are also used as seeing eye dogs and in police work. Many standardizations are maintained to keep a check on the right breeding and ensuring that the successive generations enjoy this beautiful species.