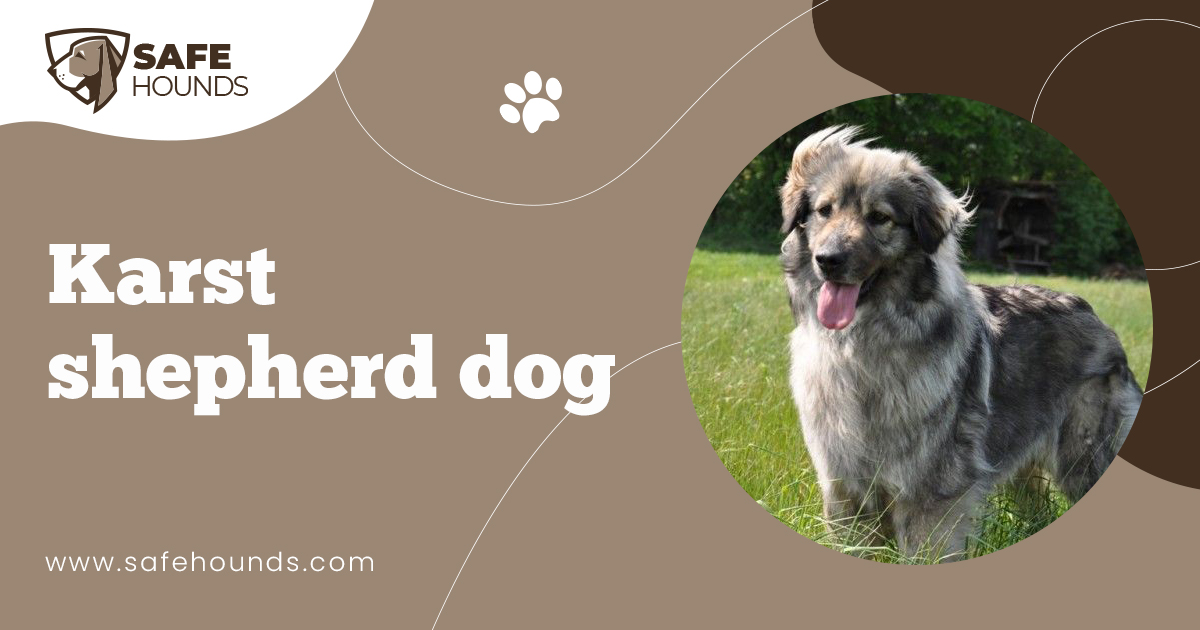 The Karst Shepherd is a medium sized masked dog with a compactly built body and impressive iron silver to dark grey coat. This dog is considered to be the oldest indigenous breed of Slovenia. This breed was named after the Slovenian Karst area where the dog originated. The Karst area is the northern border of Yugoslavia that encompasses the Istrian Peninsula. This livestock guarding dog is deemed to be related to the Sarplaninac as both breeds are believed to have originated from the Greek, Romanian and Balkan flock guards. This breed is considered as a living part of the countrys history. The Karst Shepherd was granted the honor of being a Slovenian natural treasure.

This centuries old breed was used as a sheepdog in the Karst area. The Krasky Ovcar as the dog is commonly known in Slovenia is noted to be one of the best flock guards. This breed is still performing the original task it was developed for but similar to other working breeds, the Karst Shepherd too has evolved into an outstanding home companion. The dog has a cheerful, obedient and gentle nature. The dog has a friendly and well mannered personality as well. However, this sheep dog is known to be an independent breed. The dog would always want to be treated an equal a partner and never as a subordinate. Never treat the dog as an inferior pet as this would cause the dog to be aloof and to distance itself from the human family. Unlike other flock guards, the Karst Shepherd may be rather small and less aggressive but the courage of this breed to defend the family can never be doubted. This courageous dog is loyal to its masters and would never hesitate to face guns if it is necessary to defend the master. Because of the outstanding breed appearance and personality, the Karst Shepherd has had more than 100 nominations and had won titles in prestigious national and international competitions. Moreover, 50 Krast Shepherds have passed the test for service dogs. This further confirms the outstanding quality of this breed.

This medium sized shepherd dog from the karst massif has a compact body with well developed musculature. The dog has a noble head and a well rounded skull. The medium length muzzle is broad at the base and tapers progressively towards the broad black well developed nose. Black pigmented lips are thick and well fitting. Complete dentition has a scissor bite. Wide set eyes are neither prominent nor deep set. Almond shaped eyes that are chestnut or dark brown in color give the dog a calm, frank expression. The black pigmented eyelids also give the dog a melancholic expression. Medium length ears are set moderately high. V shaped ears fall flat against the strong but not too prominent cheeks. Thick coat that covers the well muscled neck forms a ruff and well furnished mane making the neck appear shorter that its actual size.

This breed has a slightly longer than tall body. The topline is level and straight. The broad back is muscular and the well developed chest is well let down. The ribs are moderately sprung. The belly is slightly tucked up. The wide based tail is normally carried saber fashion with a slight hook at the tip. The medium length tail is covered with bushy hair that forms a plume. On the move the tail is raised level or slightly above the back. At rest the tail is carried low. A Karst Shepherd has a thick elastic close fitting darkly pigmented skin. This breed has a double coat – an abundant undercoat and a top coat that grows to about 10 cm in length. Short hair covers the head, the front of the ear and the front of the legs. Longer hair covers the trunk and the belly. This breed has fringes at the back of the forequarters and longer hair at the backside of the hindquarters form culottes. Coat color is predominantly iron gray. Some individuals may have silver grey or very dark grey coats. Some specimens are masked. Dark streak on the front legs is a distinct feature of this breed.

The Krast Shepherd is an intelligent breed. The dog excellently performs its functions of being a flock guard and a home companion. This dog will bond strongly with its master and would be very loyal to the person that earns the dogs trust. The dog may accept maltreatment from its master but it will never forget nor forgive the unjust treatment it has received. More often the dog will be distant and would reject any offers made by the offending person. This breed is an excellent flock guard and a well mannered companion. Nevertheless, training and socialization would still be necessary if the dog is to be developed into a companion that will be gentle with the children and one that will tolerate other pets of the family. A Karst Shepherd is a poor retriever but the dog more than makes up for this shortcoming by being an outstanding flock guard, a reliable guard dog as well as a devoted, loyal and affectionate family companion. Consistent and positive training method is crucial as this breed will not respond to harsh treatments.

The Karst Shepherd is a most suitable pet for an active family that lives in the suburbs or in a rural area. This is a working breed and as such it has high exercise requirements. Apartment living is not for this breed. A large yard would be needed so the dog can take care of its own exercise requirements. This breed would appreciate to be allowed to live outdoors. The weatherproof coat will protect the dog from inclement weather.

The Karst Shepherd is a healthy breed with no known genetic and chronic diseases. This breed has a 12 year life expectancy. The coat may be longish but the dog would not need an extensive grooming routine. Occasional brushing with a firm bristled brush would maintain the tiptop condition of the skin and the coat. Bathing should be avoided unless it is absolutely necessary. Frequent bathing will remove the natural oils that waterproof the coat.

The Carso region of Slovenia is noted for being the first site for the scientific research conducted on karst topography. A karst is a limestone area whose fissures, underground streams, sinkholes and caverns were formed by erosion. The karst region that encompass a large portion of northern Slovenia is also the place of origin of the Karst shepherd. This breed of shepherd dog is considered to be the oldest indigenous breed of Slovenia. The origin of the Karst Shepherd is quite murky as it is not really certain how or when this breed was developed. Although it was considered that the breed has existed during the Roman times. Some experts believed that the breed originated from the Caucasian Shepherd. Others claimed that the breed is somehow connected to the Pompeii as the skeleton of a similar dog was found. An internationally renowned explorer Prof. Strebel reported that the Karst Shepherd, the Swiss Shepherd as well as the German Rottweiler may have descended from the Pompeii dog. However, it is most likely that the ancestors of this breed were the Greek Molos that the Illyrians brought to the Krast region with their herds of sheep.

The Karst Shepherd was vividly described in the Glory of the Duchy of Carniola written by the historian Janez Vajkard Valvasor in 1689. Many other writers have described the outstanding characteristics of this breed. World War 1 has made a tremendous impact on the existence of the breed. Because of the battles, sheep breeding has tremendously declined. Consequently, the Karst Sheperd population was also reduced. The breed was near extinction and may have totally disappeared if not for the efforts of Teodor Drenik, a Slovenian artillery officer. Drenik was an enthusiastic breeder who continued to breed the Karst Shepherd in Slovenska Bistrica in the years after World War 1 and before World War 11. Through his efforts the breed was registered in 1939 with the International Kynological Association. This shepherd of the Karst Massif was grouped with the shepherd of the Sarplaninia Massif and both breeds were named Illyrian Shepherd. In 1955, the registration was reversed when the Yugoslav Kennel Club removed the Karst Shepherd from the list of international indigenous breeds. The Sarplaninac Shepherd, a dog of similar appearance but different character to the Karst Shepherd was left on the list.