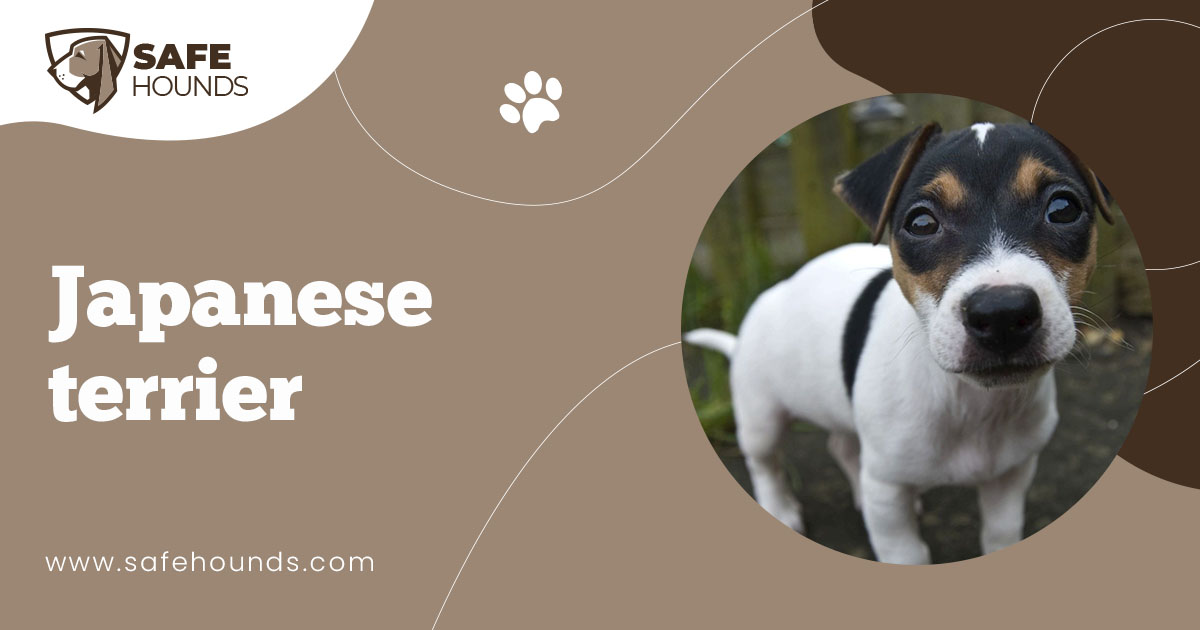 The Japanese Terrier, also known as Nihon Teria, is an average built companion dog commonly found in Japan. It was originally bred from a mixture of a Smooth Fox Terrier and an ordinary small sized Japanese native dog. The native ancestors of this breed is said to live during the Edo Era in the 17th century. During that time, English sailors were already bringing along several breeds of terrier in Japan. A medium sized breed with a dominantly white colored body coat and a black haired head was the product of cross breeding both species. Initially, it was a housedog kept at home but sooner, it was considered a famous lap-dog because of its cheerful and lively appearance and attitude.

This dog which originated in the far east is known to be a cheerful and lively dog which makes it an excellent companion during walks and strolls around the park. It is also a good lapdog because of its average size and cuddly appearance. More than these popular characteristics, Japanese Terriers are also intelligent, warm and lighthearted breeds making them great housedogs. These clean dogs rarely leave any dirty track which means that it doesnt need a high level maintenance. They are able to play with children and love to learn new tricks and styles, which they find enormously easy to learn.

This fearless and loyal dog is a nice choice for a family dog because of its excellent watch dog abilities. Although they are medium built creatures, they are strong and sturdy, with an excellent sense of smell and noteworthy eyesight. Thus, they can be used to watch over something. This breed is also a good sporting dog with its appearance- a strong neck, well let down chest, brawny loin, and well raised abdomen. Weighing approximately 6-8 pounds, it can carry itself well and can do exercises without any hassle at all. Plus, its strong and muscular hind legs enable them to run a pretty good distance. The Japanese terrier also needs to be exposed by socialization because like many other dogs, this helps improve their temperaments and attitude.

Originating in Japan, this breed stands approximately 12-14 inches and weighs about 6-8 pounds. This generally small stature of the Japanese terrier makes it easily manageable, not needing any intensive hygienic maintenance. It has a flat and slender skull with a coat of black short, smooth and glossy fur. The rest parts of the body are covered with similar short, smooth, dense and glossy white fur. Because of this very short coat, this breed is intolerant to cold and therefore should be given a warm blanket during cold seasons. Although the dog has a thin set of coat, it is a medium-shedder which makes it shed a little more hair than any other breeds.

There are markings scattered over the body which are either black or tan in color. Vigilant eyes are oval in shape and are dark in color. Ears are dropping forward and v-shaped. It has a thin piece of tail and in certain areas, docking the tail is usually done when considered legal. The Japanese terrier is a good sport dog and can be used best for playing simple dog games. It has a slender back and well tuck tummy making it more agile than others. Also, its sturdy and muscular hind legs allow it to run smoothly and quickly.

The Japanese Terrier is known for its cheerful attitude. Its loyal and faithful attitude makes it a good companion, house and lap dog. Most of the time, this dog does all things to get the attention of people around it, making it a very lively and playful pet. A Japanese Terrier highly familiarizes itself with its master- becoming strongly attached and overprotective to its master. This dog is sensitive to any situation which it deems dangerous for its master and does so by barking belligerently. Even simple arguments or raising ones voice towards its master would make it antagonize the offender.

A sensitive and pleasant looking dog, the Japanese Terrier is easily trainable and loves to learn new tricks and techniques. However, his sensitivity could make him shy and reserved, not learning new tricks at all. Because of this, the master should be gentle in teaching this breed and be consistent in training it. Among all things, the Japanese terrier loves to play with toys like balls, and interactive games with the master. At times, this breed may even initiate getting his toys and laying it on the ground on his own.

Japanese terriers are child-friendly most especially if the child is playful and responsible. When outdoor, it should be leashed or set free to run in secure and bounded areas. With regards to its attitude toward other animals, it is friendly and gets along well with breeds of his kind as well as dogs of other breed. It can also be trained to get along with cats, but may not be good with smaller pets like guinea pigs or rabbits.

The Japanese terrier cannot be left alone in the yard, thus it should be taken for a walk with a leash. Otherwise, the area should be secured and delimited so that it can freely run and play with children or other dogs. It should be regularly exercised, like running or doing interactive games in open spaces. Doing a daily walk with this dog would greatly improve its physique and agility. Constant brushing of its coat is also a necessity because it is a medium shedder, making it leave dog hairs almost everywhere.

The sensitivity of this dog could make him sense even the slightest sound or smell of a person, especially intruders. It could wake up any time of the night and awake you violently. This breed is highly intolerant to cold places and should be constantly warmed. With this characteristic, if you are living in places where there are cold seasons, be sure to secure your Japanese terrier a warm blanket or an electric blanket. Sweaters should also be worn during winter walks.

Aside from these routines, the Japanese terrier can survive optimally because it is a low maintenance type of breed unlike others which need so much of the hygienic and grooming routines.

Overall, the Japanese terrier is a highly adaptable breed, suited for various climates in both rural and urban places. This implies that this dog can easily cope with what it around it and learns to live with it easily. This breed loves the sunlight and is generally vigorous and lively during hot weathers. But during cold seasons, keeping them warm can help them sustain a significant amount of energy to continue their daily activities.

During Japans Edo Era (the time when Tokyo became an increasingly progressive city), the country was already starting to open up its previously imperial civilization to merchants from other countries. Merchants from various countries across the globe came to trade and do business. Along with these merchants and traders, dog breeds were also imported to the country. One of which was the Smooth Fox terrier from England. The smooth fox terrier is very comparable to a Japanese terrier because of the distinct black colored head and white coated body. It is the very first breed from the fox terrier family to be officially recognized by the The Kennel Club. On the other hand, native Nippon dogs are generally characterized by their square bodies, Akita face, short and thick coats, plus their upward curved tails. Native Japanese dogs are also known for their obedience, loyalty and fidelity to their masters. These two breeds were brought together for cross breeding during the 17th century in Japan. It was in Nagasaki where these two breeds were cross bred because the only port open to the West was in Nagasaki. The product of the cross breeding was the Japanese terrier which, unlike any other terrier descendants, was known to be a lap dog and exclusively as a pet.

Sooner, neighboring ports like Kobe and Yokohama were already introduced with this dog breed and the Japanese terrier gained popularity among these areas. Breeding during these centuries were generally unplanned and unscientific but by the year 1920s to 1930s, breeding the Smooth Fox Terrier and Native Japanese Dogs were already plan and scientifically performed by breed enthusiasts. Selective breeding was already performed using progenitor breeds such as the Kobe Terrier. The breed that was created out of the selective and fancy breeding was the modern day Japanese Terrier- a cheerful, lively and playful breed for almost all purposes. It can be used as plain as a lap dog, a companion dog, a watch and a sport dog. Because of the versatility of the Japanese terrier, it soon became popular in the country and was officially recognized by the Japanese Kennel Club in 1930. Countries in Europe are also enthusiasts of this Japanese terrier aside from their country of nativity.