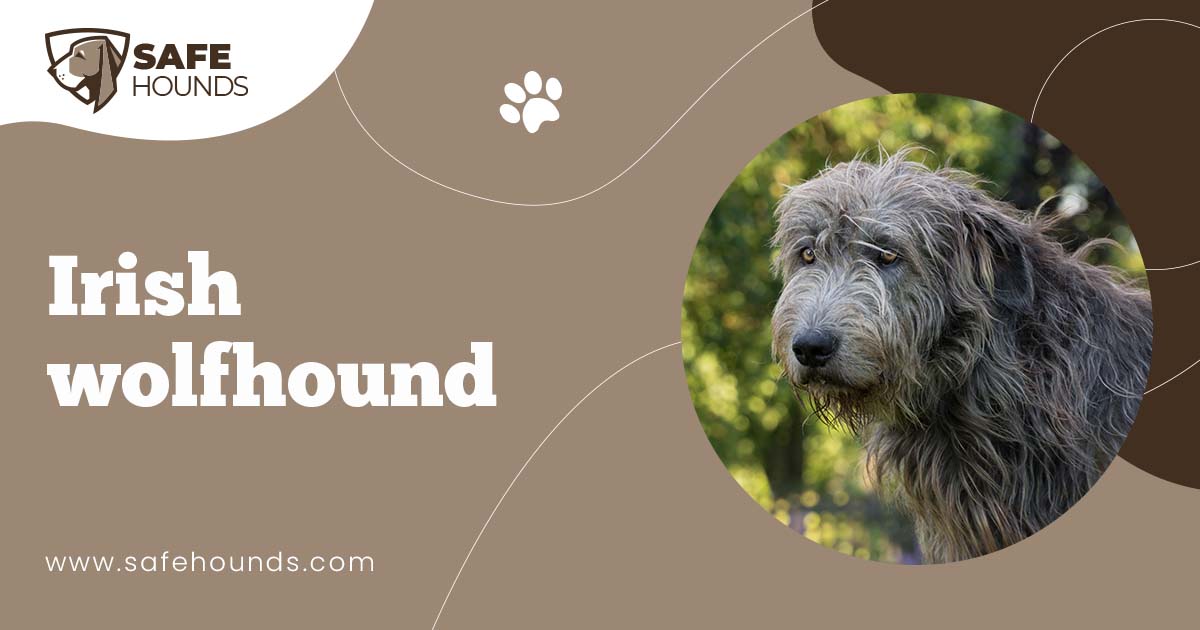 Of all the dog breeds in the world, Irish Wolfhounds are the largest in the world. They are remarkable dogs with high energy, swiftness with keen eyesight. The Celts were the first to use these gentle beasts and brought them to Ireland during the time of 2500 BC and 1500 BC. The Celts had used these animals for war due to their size. The size of the dog made it possible for the dog to pull a horseman off his horse when the battle was going on. These dogs were appreciated for their great strength, courage, and beauty.

They are aptly named as they were named after their purpose – hunting wolves. They have a rough coat and come in a variety of colors including gray, red, black, white, brown, brindle and wheaten. Irish Wolfhounds have a large arrow shaped head with a long muscular neck. They have a similar shaped body like a Greyhound only larger. They are strongly built with easy active movements while the head is carried high. The tail is carried with a curving, upward swing.

Irish Wolfhounds are very dignified dogs with a generous, thoughtful, and intelligent nature. They may be huge, but are lamb like and can be trusted with children. They are completely loyal to their owners and their family. People are deterred by their size because they are otherwise very friendly dogs. They are not guard dogs, but were used as hunting companions due to their sheer weight and size.

They are slow to grow because it takes them 2 years to mature and become full grown. While they are young and growing it is best to watch over them as too much exercise can become a problem for a young dog. The Irish Wolfhound is a favorable pet, but due to there huge size they need a big area in which to romp and play.

Being the tallest dogs in the world, the Irish Wolfhound stands between 29 – 36 inches with a weight of 105 to 120 pounds at 18 months of age. It can stand to a height of 7 feet on its hind legs in some cases. Usually they reach the height of a small pony and look very menacing. It has a rough shaggy coat with colors of gray, brindle, black, white, and red. It has a long head with a pointed muzzle and a muscular neck with strong shoulders. It has a deep chest and a retracted abdomen, which helps in running and greater stamina.

The paws are rounded and large with arched toes and curved nails. The ears are carried back and stand up when they are excited. The Irish Wolfhound has a hairy, slightly curved, and long tail of medium sized thickness. The forelegs are straight, heavily boned, and have long muscular thighs. Overall, the body is long and well ribbed with breath across hips. Jaws are wide with a scissor like grip and teeth are strong.

Body hair is long and wiry over the head and eyes. It also has wiry and bushy eyebrows with a gentle look in the dark eyes. The appearance of the Irish Wolfhound is of stamina, great strength, and grace with a gait of action and ease. They can be trusted completely with small kids and get along easily with pets of all sizes. They love the outdoors and active games with the family.

Mild and gentle, these giant beasts have been around for ages. These dogs are good tempered, patient, thoughtful, and can be easily trusted with children. They have unconditional loyalty towards their owners and home. They are friendly dogs and cannot be trained as guard dogs, but get along well with other dogs.

Training is essential for a puppy as they can be trained firmly but gently and are full grown in two years. They need to be handled with care so that they grow up to be confident dogs. They also need to learn not to pull on the leash, so that it becomes easier for the owner later on.

The Irish Wolfhound has a medium sized rough coat, which needs good grooming with a stiff brush. The dead hair needs plucking once or twice a year and the breed is a medium shredder. They need a lot of exercise and an area where they can run around. Too much exercise is not advisable as it interferes in their growth and development.

Shampoo and bathing is recommended on an as needed basis. As an average shedder, it does not need a great deal of maintenance, but should be brushed often. Check for any eye and ear infections, as they are prone to this. The life span of the Irish Wolfhound is from 6 to 8 years.

The descent of the Irish Wolfhound can be traced from Cu, which was a massive shaggy dog that was used to hunt elks, wild boar, and the wolves during the early 18th century. They were often exported as royal gifts. With the only royalty allowed to keep this huge dog, Oliver Cromwell had to ban their export from Britain. Irish Wolfhounds disappeared from Ireland in 1766 after the last wolf was hunted and killed. Along with them ended the wild boar and elk hunting too.

Captain Graham had the Irish Wolfhound rebred with the combination of Deerhound, Great hound, and Borzoi and the result was the alternating colors of the coat. During the medieval period, the dog was known as Irish Wolfedogge and came in coats of gray only, but there was a choice of rough and smooth coat variety. The Irish Wolfhound was not always a gentle beast, but had a grave nature with aggressive tendencies.

The Irish Wolfhound has been recorded in ancient Rome they caused too much excitement and it has been mentioned that the Irish Wolfhound terrified the people so much due to their size and looks that Romans transported them in cages. Within the arena, the original Wolfhound was compared to a lion as they killed with the same effect of biting the neck and crushing the spine of the opposing creatures. Stories are abundant in old texts and glamorize their ferocity.

With specialized breeding, the dog has mellowed down to a considerable extent and has become a good pet to keep, if you have a large space and a large heart. They have become amicable to people and children to the extent that they have become gentle, docile, huge, clumsy dogs, who have loyal tendencies towards their family and home. They are good playful pets who can be easily trained and enjoy all physical activity.