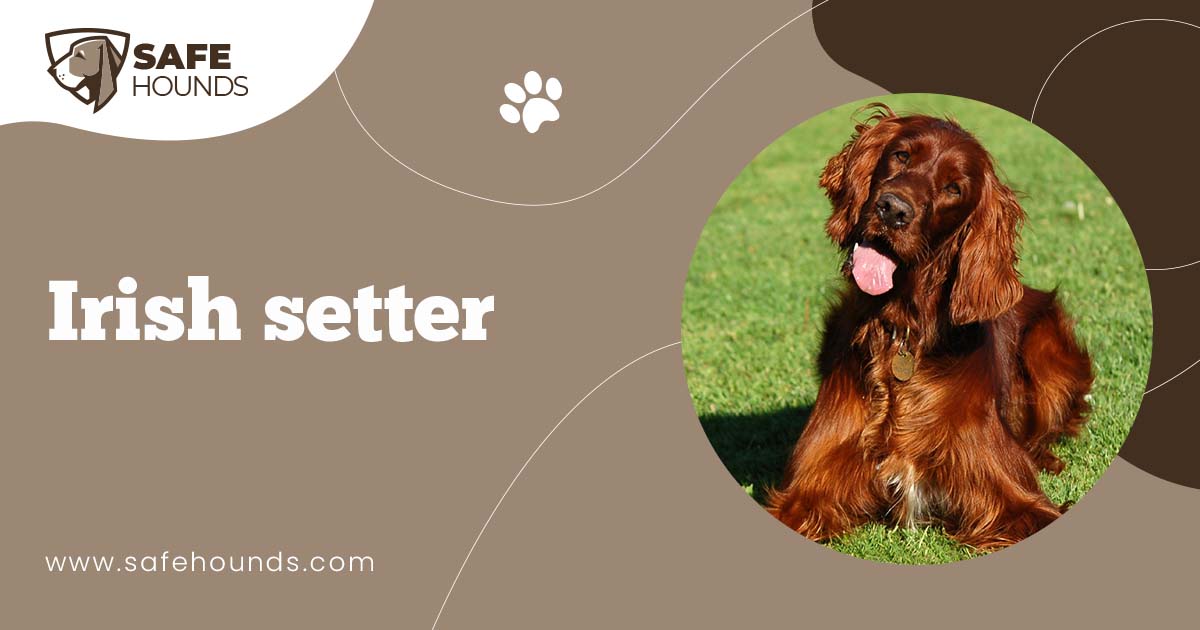 The Irish Setter is known for being one of the most beautiful of all dog breeds. With their flowing, feathering coat and their friendly and happy go lucky personality everyone seems to adore them. One thing to remember though before you fall head over heels in love, the Irish Setter is not for every family. They need plenty of exercise, affection, and attention. These are not the type of dog you can leave in out in the yard and only visit long enough to feed and water.

There are really two varieties of Irish Setters. One is darker, larger, and has a heavier coat from conformation bloodlines whereas the other variety is quite a bit smaller, lighter with ancestors in the field trial lines. Both varieties still have a strong hunting extinct.

The Irish Setter has long and silky hair, which is deep red in color, or rich shades of chestnut or mahogany. Some may even have a tad of white on their chest and feet, which is accepted, however, black markings are not allowed. During puppyhood, Irish Setters can have silvery gray hair behind their legs and ears, however, it does usually disappear as the dog grows. It does have a double coat like many hunting dogs, however, the undercoat is thicker during the cold winter months. Even though the Irish Setter has a long feathery style coat, the hair on the head should be short and fine. The feet should have the long hair as the rest of the body.

Ears on the Irish Setter are triangular, soft, long, thin, and low set. Their ears hang in a neat fold close to the head and are just about long enough to reach their nose. Their legs are muscular and long. He should be just a tad longer than he is tall. His muzzle should be close to half the length of his head with a straight nasal canal and a black, brown, or chocolate nose. The jaws of the Irish Setter fit close with a dental arch. Eyes are chestnut or dark hazel. The Irish Setter has a unique expression with their almond shaped medium eyes of softness and alertness.

Irish Setters are known for being playful, friendly, energetic, happy, intelligent, high-spirited, affectionate, loving, and full of energy. They do tend to have an independent side and are quite impulsive. They love human companionship and of course the petting that goes along with this. Irish Setters enjoy children and can play for hours.

Other dogs are fine around Irish Setters as they enjoy the playtime, however, other animals or strangers will cause the breed to bark until they know the intruder is a friend instead of a foe.

Irish Setters have been known for being slow witted, however, they are trainable. Training does take some firm handling.

Apartment life is not the style of the Irish Setter, he needs country living and a large yard to keep him happy and fit. His high energy level almost demands lots of room to run and play. He is not happy cooped up in a small area such as a kennel or an apartment.

The Irish Setter needs more exercise than many dog breeds. If he does not receive enough exercise, he will become difficult to manage quickly.

His long coat will need brushed or combed daily in order to remove mats, tangles, and burrs. During the time while his fur is molting, he will need extra attention. Bathing should only be done on an as needed basis.

The Irish Setter came to America in the 1800s. The American Field started the Field Dog Stud Book and the registry of the Irish Setters born in the US in 1874. This Field Dog Stud Book is the oldest purebred registry in all of the Us. Dogs were only allowed in this book if they were bred from sires and dams of different breeds. Around this time, the Llewellin Setter was being bred using the Lavarack bloodlines of the English Setter and a few other breeds that were native Irish Setters. Also in this time period, the Red Setter was fast becoming a favorite in dog shows.

In the late 1800s the Irish Setter was not just red in color but many American Kennel Club Irish Setters were a variety of colors. A sports writer of the 19th century, Frank Forester, described the Irish Setter in this manner, The points of the Irish Setter are more bony, angular, and wiry frame, a longer head, a less silky and straighter coat that those of the English. His color ought to be a deep orange-red and white, a common mark is a stripe of white between the eyes and a white ring around the neck, white stockings, and a white tag to the tail.

The preferred color for show dogs was of course the deep red. During the time period of 1874 and 1948, 760 conformation champions were bred, out of these only five held champion titles.

The Field and Stream magazine during the 1940s published an article stating that the Irish Setter was vanishing from the field. This meant they would have to work to develop the breed as a working dog once again.