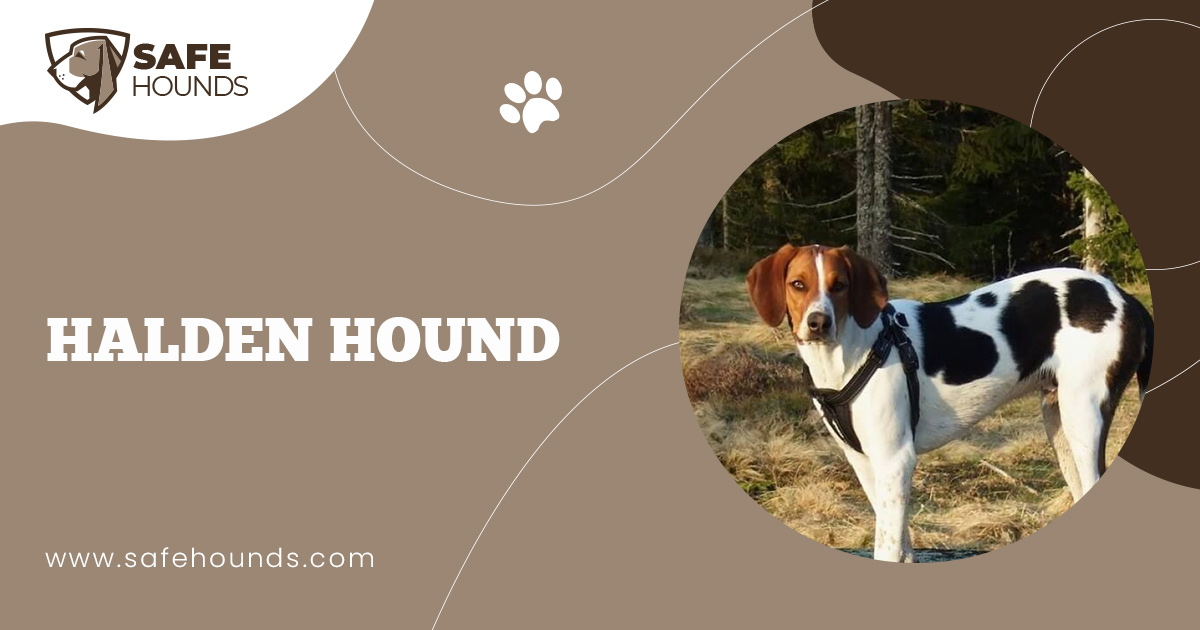 The Halden Hound, one of the Norwegian hare hounds was named after the town of Halden where the breed was actually developed in the early 1900s. This breed of scenthound is noted for being a lightweight hunter, one that would gracefully sprint after its quarry – the hare. The Halden Hound was developed by crossing an indigenous dog of Norway with English, German and Swedish scenthounds. Although the breed standard was established in 1950s and this breed is commonly seen in Norway, it is relatively unknown by other dog loving countries. This breed has a slim build that allows the dog to be very fast. In Norway these dogs are considered to be one of the best hunting dogs, one that has great endurance and one that is known to chase the prey for miles with out tiring and without giving up. Apart from having a body that exudes power and agility, these dogs have muscled and well boned legs. Breeders of the Halden Hounds are trying to maintain an ideal foot shape. The dogs feet have to be high and tight. Dense fur should grow between the long toes. This foot shape provides the dog with warmth and greater flexibility and stability when they hunt and navigate difficult snowy terrain.

The Halden Hound may have an elegant build and be noted for being one exceptional hunter but the dog does have other endearing qualities. In recent years, this noted hunter has evolved into a wonderful home companion. When hunting hare and foxes, this energetic breed would show independence and great stamina. However, the dogs would be docile and affectionate at home – the ideal playmate of the children and the perfect companion of an active master.

At first glance at a Halden Hound you would think that you are looking at an American Foxhound as both have the same body built and coloring. With an approximate weight of 40 to 55 pounds and a height of 17 to 21 inches, it is very apparent that the Halden Hound is smaller than the American Foxhound that has an average weight of 65 to 75 pounds and has an average height of 26 to 29 inches measured at the withers.

The Halden Hounds rectangular build shows strength although it does not appear to be heavy. This elegant dog has a slightly domed skull, a medium sized muzzle and a straight nasal bridge. The cheeks are rather flat. Not too pendulous lips enclose complete dentition with a perfect scissor bite. A Halden Hound has medium sized dark brown eyes that show a tranquil expression. Ears that are set neither too high nor too low would reach the middle part of the muzzle when drawn forward. The ears hang down the sides of the head.

This dogs rather long neck is strong without any dewlap. A Halden Hounds back is strong, the topline is straight and the loin is broad and muscular. This dog has a slightly sloping croup. The deep chest has well sprung ribs and the belly is slightly tucked up. The thick tail that reaches to the hock is usually carried low. This breed has straight lean well boned forelegs and hind legs. The muscular thighs as well as the strong boned limbs give the dog agility and good speed. Oval shaped feet are tightly knit and well arched. Feet should have dense hair between the toes. This is very necessary as these dogs traverse snowy terrain when hunting. A Halden Hounds coat is straight, dense and harsh to the touch. This breed has a dense undercoat. The white predominant coat color is made distinct with black markings on the dogs body and tan shadings on the dogs head and legs. Some individuals may have tan shadings between the black and white markings and tan spots above the eyes, on the cheeks and on the dogs breast and legs.

The Halden Hound is an energetic hunter. This dog exhibits its independent nature when hunting. A Halden Hound is an exceptional passionate hunter but it makes an ideal pet as well. The Halden Hound has a loyal and affectionate nature. This breed bonds closely with its human family. It behaves well with other dogs and smaller pets in the household especially if they have grown together. Because of its gentle and playful nature, this dog makes a wonderful companion and playmate of the children. However, very small children should not be allowed to be with the dog alone. This is a gentle breed and it does not have an aggressive demeanor but the dog may react if inadvertently hurt by a kid.

These dogs are hunters, primarily developed to chase its prey. As such it would not be a good idea to keep the dog in cramped living quarters such as an apartment. A bored Halden Hound will be a destructive dog. This breed can be very noisy when bored. The dog has high exercise requirements. These dogs would do best in a home with adequate areas where the dog can run and play. A Halden Hound has a weatherproof coat that allows it to bear cold weather for extended periods of time. The dog would appreciate to be allowed to run free in a fence secured yard. Other hound breeds hunt in pack, not a Halden Hound. This hound was trained to hunt alone with a human hunter. As such, the dog may exhibit a dominant personality over other dogs. It would not be a good idea to take this breed for a walk without a leash as a fight with other dog may ensue. This unwanted behavior can be corrected with obedience training and socialization. The trouble is the dogs independent nature. Because of the dog willful streak, training can be challenging especially for a first time dog owner.

Similar to other short coated dogs, the Halden Hound is an easy to care for breed. This hound is a minimal shedder and regular brushing would ensure that dead hair is removed. The skin as well as the coat would benefit from frequent brushing as it will distribute the natural oils of the coat. Some pampered pets are taken to the salon for professional grooming and for steam treatments though if it is not possible the dog can be bathed with mild soap and warm water. Being a hunting breed and one with pendulous ears, this dog is prone to ear infections. Ears must be cleaned regularly more so if the dog has been on a hunting trip.

In Norway hare is one of the most hunted small game. During the early times hunting hares is commonly done with the use of traps and snares. Hunting hares with dogs became a favored sport in Norway in the 17th century. This triggered off the need to breed and develop Norwegian hare dogs hence the development of the Dunker Hound, the Hygen Hound and the Halden Hound. Of the three Norwegian hare dogs, the Halden Hound otherwise known as the Haldestovare is considered to be the smallest.

The breeding of the progenitors of the Haldenstovare was started in 1860 by a farmer named Hans Bisiberg Larsen in the southeastern Oestfold county of Norway. The breed that was created was called Bissenberghund, a name that was taken from the developer of the breed. The breed became a popular hunting hound in Norway during that time although the breed did not spread elsewhere. This hunting hound answers to several names including Ankerstover. The Haldenstovare was believed to have been created by cross breeding the Bissenberghund with scenthounds from Germany, Sweden and England in the early 1900s. The name Haldenstovare was taken from Halden, the southeastern town of Norway where the breed was developed.

The Halden Hound is a slim but elegant looking breed of scenthound. This breed is favored in its country of origin as it is acclaimed for being an outstanding hunter of hare and rabbits. This breed is extremely fast and has the tenacity not to allow a prey to get away even if it means following the prey for miles under adverse weather conditions and over harsh terrain. The Halden Hound is prevalent in Norway although it is a relatively unknown breed in other countries. Neighboring countries of Norway have their own indigenous scenhounds and the Halden Hound was not really appreciated.

As in other countries, industrialization has reduced the hunting grounds in Norway. A number of Halden Hounds no longer worked in the hunting field. The breed though has evolved into a wonderful home companion. The dog still excels in hunting hare and rabbits and every now an then the dog is taken by the master to hunt. However, the breed is valued more as a home companion. Because of the relative scarcity and the limited numbers of this breed, dedicated breeders are taking careful breeding measures to avoid inbreeding that could result to inheritable defects.