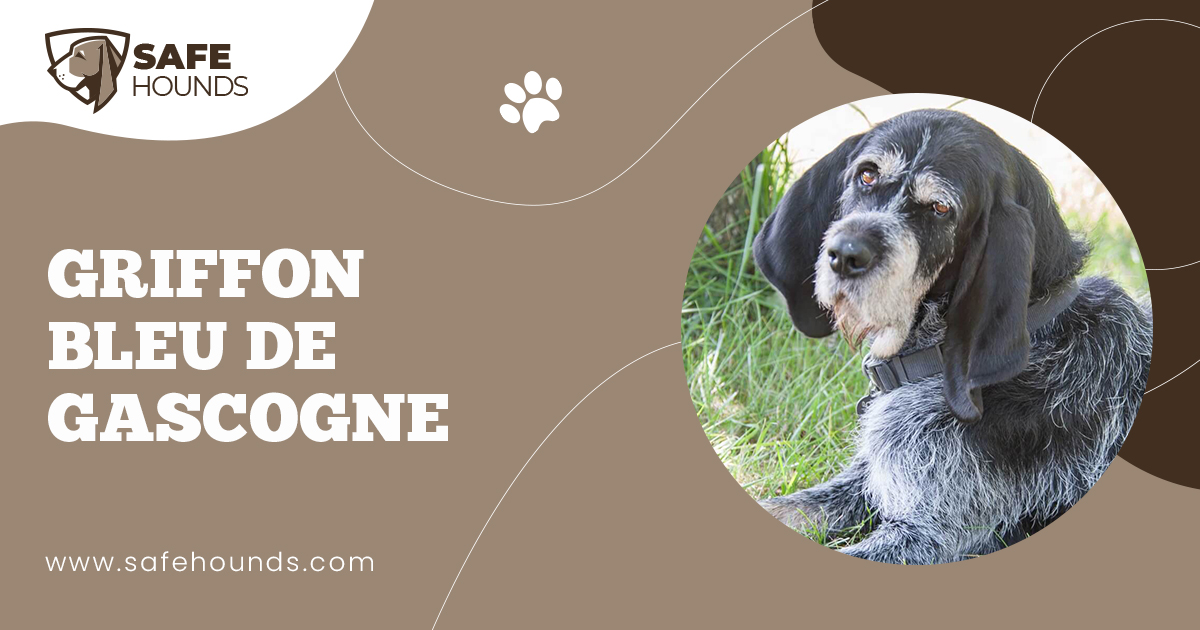 The Griffon Bleu de Gascogne is a slightly built multipurpose hound with a rustic appearance. This breeds conformation denotes the physical appearance of the breeds it has descended from. A Griffon Bleu de Gascogne is a medium large breed. From the withers, a male dog measures between 19.5 to 23.5 inches. Females height range from 19 to 21.5 inches. Approximate weight is from 36 to 40 pounds. This hound has a well built muscular body. This breeds thick and supple skin can be black or have a marbled appearance because of the black patches on the white skin. The hard, rough and shaggy coat gives a slate blue effect because of the white and black mottling. These dogs generally have two black patches on either side of the head. The black patches cover the ears and the area around the eyes but stopping at the cheeks. The black marking does not cover the skull entirely as there is a white interval at the middle that separates the black marking. Above the superciliary arches are bright tan markings that give the dog a quatroeuille or a four-eyed effect. Tan markings can be found on the cheeks, lips, inner side of the ears, on the legs and on the underside of the tail.

This breed has a slightly domed though not too broad skull. The muzzle that is almost of the same length as the ogival shaped skull has a straight or slightly arched nasal bridge. The stop is slightly accentuated. Large nose is black and has well opened nostrils. Although lightly developed, the lips cover the lower jaws very well. Teeth meet in a scissor bite. Oval shaped eyes with dark chestnut irises are lively and very expressive. Set below the eye line, the supple and rather pointed ears are slightly curled.

This breed has a rather slender neck with a little dewlap. The dogs back is quite short but firm and well supported. The slightly arched loin is well muscled. Croup is slightly oblique. Well developed chest has rounded ribs. The flank is slightly tucked up. Tail that reaches the point of the hock is well set and well covered with hair. Tail is carried gaily in saber fashion.

The Griffon Bleu de Gascogne is an alert and energetic hunter that works on all types of terrain and even under treacherous weather conditions. This breed though is also valued for its loyal and affectionate temperament. The dog is generally good with the children especially if it was raised in the same household since the dog was a puppy. Hunted in packs, these dogs get along well with other canine pets. However because of a high prey drive, a Griffon Bleu de Gascogne is potentially dangerous with other pets. This dog should never be made an apartment of city dweller. These dogs have boundless energies. They would need a home with an enclosed yard where they can satisfy their high exercise requirements.

A Griffon Bleu de Gascogne is a breed of hunting dog. These dog are valued for their working abilities rather than for their appearance. However, this breeds coat would benefit from regular brushing and combing. The rough shaggy hair of this breed is not shed spontaneously thus brushing will be needed to remove dead hair. Brushing will help spread the natural oils of the skin to the hair. This grooming procedure will be a good way the check the presence of external parasites like fleas and ticks on the coat of the dog. The Griffon Bleu de Gascogne is a drop-eared breed. Regular ear cleaning will be necessary to prevent yeast infections that can develop if the ears are allowed to remain moist.

Dogs have been the partners of man for innumerable years. These animals, aside from being loyal and devoted companions have made mans survival during the ancient times a lot easier. Then and now, dogs have performed myriad tasks. Dogs have guarded man and his properties for untold number of years. From the ancient times up to the present, dogs have hunted and provided man with food. Dogs are highly valued as they have been mans best and oldest friends.

Hunting is a favorite sport of Frenchmen. The woodlands of France countryside is a lively place especially during winter weekends. Hunting is also considered to be an effective method of pest control. Hunting is noted to be indispensable in this country as it is supposed to limit the population of wild boar, deer and other wild animals that proved to cause considerable material damage to farmers. Hunting in France is commonly conducted with a pack of hunting dogs. France is the home of several breed of hunting dogs. These running or hunting dogs are believed to have developed from the dogs brought by the Phoenicians from the Middle East.

The Griffon Bleu de Gascogne is one of these highly valued animals. The dog is hunted in packs or individually and is considered to be an exceptionally good hunter of small and large game. This is a medium large breed with a rough blue speckled coat. This versatile scenthound that was developed in France has an ancient Pyrenean origin. The breed is believed to have descended from Griffon Nivernais and from the Bleu de Gascogne. Breed enthusiasts speculates that the Grand Griffon Vendeen has also influenced the development of this breed. The Bleu de Gascogne is a breed that was developed in Gascony province of France during the 14th century. These dogs have descended from the Saint Hubert hounds imported from Ardennes by Gaston Phoebus. The Griffon Nivernais is an ancient breed from the Nivernais region of France. These dogs were utilized to hunt wild boar and wolves during the 14th century. The Grand Griffon Vendeed was developed in the 16th century from the dogs used by the Gauls. All these ancestors of the Griffon Bleu de Gascogne are noted for being excellent hunter of small and large game. Would it be surprising for this wire haired dog to be acclaimed as an excellent hunter too?

The Griffon Bleu de Gascogne has performed well in the Frenchs Chasse à Courre and Chasse à Tir methods of hunting so much so that breed enthusiasts believed that the dogs have almost hunted themselves to extinction. For many years, this hunting breed was rarely seen. But as they say, you can never put a good dog down. The Griffon Bleu de Gascogne had made a comeback. This breed that is acclaimed for its excellent scenting ability, for its good voice and for its unwavering desire to chase its prey is reintroduced once more to the world of hunting. This breed has gained access to foreign soil and is now one of the most sought after breeds by rare breed fanciers.