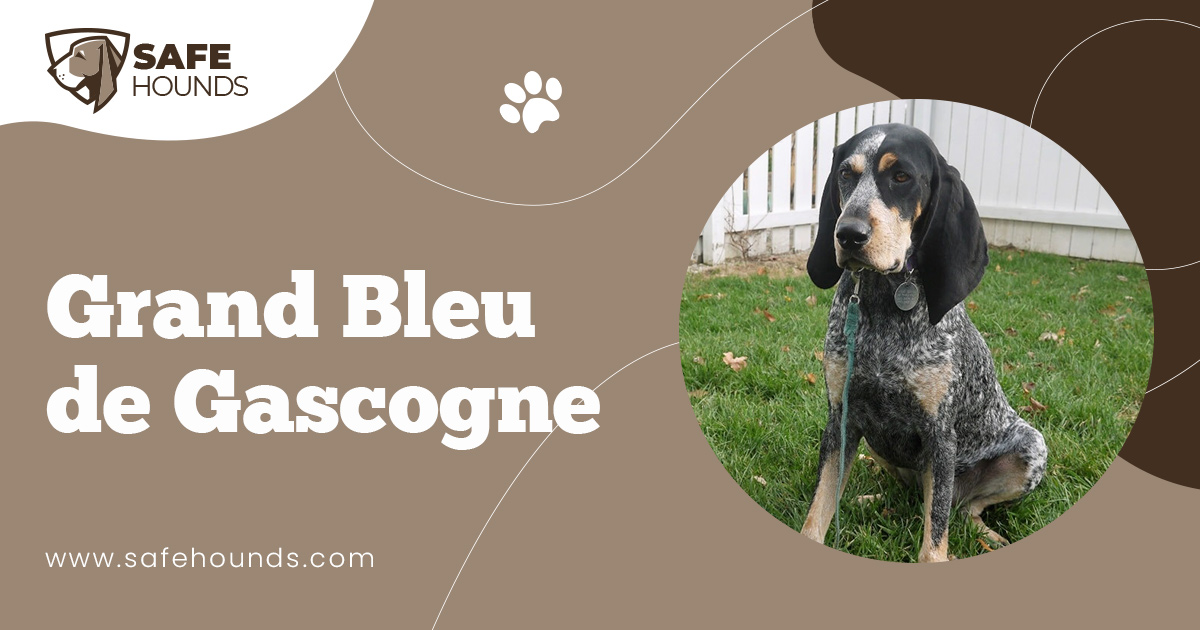 The Grand Bleu is noted to be one of the largest breed of hounds in the world. Measuring 29 inches at the shoulders, the breed is as tall as the Great Pyrenees and the Newfoundland. The Grand Blue however has a leaner physique. This lean appearance belies the dogs excellent hunting prowess. This breed was originally developed to hunt wolves. Unlike other hounds, this breed is rather slow on the trail. The Grand Bleu may lack speed but no hunter who had the opportunity to hunt with this dog would doubt its hunting ability. The Grand Bleu is noted for its strength, stamina and the sheer will power to find the prey. Moreover, the dog has a clear sonorous melodious voice that allows the hunter to follow and to know the location of the dog. A Grand Bleu may hunt independently or in packs. Accustomed to hunting wolves this breed was later on developed to hunt deer, wild boar and hares.

The Grand Bleu de Gascogne is an industrious, tireless and avid hunter, one that is always ready and raring to hunt. However, this dog easily adjusts to the life of a pampered pet. This dog that is known to be lazy at home makes wonderful home companions because of its well balanced temperament.

The Grand Bleu de Gascogne is a dog with aristocratic elegant appearance but at first glance you will instantly notice the strength and power of this large breed of hound. This is a massive dog but unlike other large breeds, the Grand Bleu has a lean physique and powerful long legs that enables the dog to excel in the most challenging of hunts. This breed has a long large and distinguished looking head that is covered with loose skin that forms a wrinkle or two on the cheeks. The dog has a black palate and well pigmented pendulous lips. Dark colored eyes have a trusting though melancholy expression. The low set ears curl inward and reach the tip of the nose. The Grand Bleu has a squarish muzzle, strong jaws and complete dentition that meet in a perfect scissor bite. The rounded medium length neck carries a dewlap. The fairly long thick tail is carried sickle fashion. The well developed long, deep and broad chest, long and muscular back and the moderately rounded ribs give the dog a lean but lithe appearance. The slightly long smooth coat of this breed is weather resistant. A Grand Bleu de Gascogne has an impressive dense and shiny coat. The predominantly white base is entirely covered with black mottling giving the coat a blue appearance. Two black marks on each side of the head cover the ears and envelop the eyes. A very distinct characteristic of this breed is a small black mark that is found on the skull. Some dogs may have a mottled blaze but most individuals have tan spots above the eyes and tan marks on the cheeks, lips and inside the ears.

The Grand Bleu de Gascogne is a gentle and kind breed. The elegant appearance and the aristocratic attitude of the breed may look off-putting but the dog has a kind heart and a gentle soul. The dog is neither shy nor aggressive. This mild mannered breed is generally patient with children. The dog may prefer to be in the company of older children but it would never show a violent behavior even when made to endure the unintentional rough handling and the boisterous affection of a youngster. The Grand Bleu however, is a large breed. The exuberant playfulness and the physical strength can make even a puppy a real nuisance inside the home. Very young kids should not be left alone with the dog. Accustomed to hunting in packs and possessing a gentle nature, this dog tolerates other dogs and smaller pets. This is not a difficult breed to train. The Grand Bleu is intelligent and ready to learn. Being large breed obedience training is imperative but some dogs may show stubbornness. This is why training is best started when the dog is still a puppy as it would seldom exhibit its stubbornness.

A Grand Bleu de Gascogne is a gundog. This breed has the ability to run for miles without tiring. Dogs that are kept mainly as home companions would need extensive exercise. This breed would not do well in an apartment or in a cramped living space. Owners of this breed must provide the dog with long daily walks not only to keep the dog physically fit but also mentally alert. This breed bonds closely with the family. The dog would demand constant attention and would demand to be included in the activities of the family. A dog that is allowed to live in a kennel turns into a destructive dog.

The Grand Bleu de Gascone is an easy dog to care for. This breed does not shed heavily. Weekly brushing of the coat will remove dead hair. Rubbing the coat with a chamois cloth will maintain its shiny appearance. Some owners add linseed oil to the food ration of the dog as it is believed to make the coat gleam.

The Grand Bleu de Gascogne is believed to be one of the oldest as well as considered to be the purest of all hound dogs. This dog that originates from the south western coast of France, specifically in the Gascony and Guyenne Provinces is one of the four French breeds with Gascogne attached to their names. The Great Gascony Hound as the breed is also called was speculated to have existed in the Middle Ages. There are several theories regarding the origin of this breed but with the impressive size, as well as the highly developed scenting ability not to mention the outstanding hunting capability, it is evident that this breed has descended from the dogs brought by the Gaul and Phoenician traders to France. These dogs were crossed with the local chiens courant. It was speculated that the Grand Bleu de Gascogne is one of the few existing breeds that has directly descended from the Chien Courant, an ancient breed acclaimed for it massive size as well as for its legendary strength and tenacious hunting ability. Unfortunately, the Chien Courant is now extinct. With the outstanding characteristic traits of the progenitors, it is not surprising for the Grand to be on top of the list hounds.

From 1150 to 1450, the provinces where the Grand Bleu de Gascogne was developed were under the British rule. It was thought that these dogs were the ancestors of The English hounds that were developed during the Middle Ages. This breed was originally developed to hunt wolves. However, the breeds excellence in hunting wolves almost caused their extinction. The Grand was then used to hunt deer, wild boar and hare. Again, the breed has shown its inherent excellent hunting prowess. The book The Hounds of France has mentioned the ability of his breed to chase and drive the hare to the waiting gun of the hunter. The breed had gained fame and recognition.

In 1785, General Lafayette aware of General George Washingtons keen interest on hounds gifted him with seven purebred Grand Bleu de Gascogne dogs. Many entries in the generals diary are about his dogs. The dogs melodious voice was compared by the general to the bells of Moscow. The general breed the dogs himself and on the first year one of the Gascony bitches produced 15 purebred puppies. From the later part of the 1800s and again in the mid 1900s more dogs were imported to America. However, this breed was not really appreciated by the Americans given that the dog is not noted for speed and does not have the ability to locate game quickly – the qualities that are very necessary for coon hunting. The Gascognes have a meticulous and systematic approach to a hunt but the dog really does have a slow gait. Due to the hot climate, French hunters as well as the dogs are used to moving in a relaxed pace. To enhance the speed and the cold trailing ability of the dog, The Americans have crossed the Gascogne with native hounds.

The Grand Bleu de Gascogne has gained popularity all over the world. The dog still hunts hare, deer and wild boar. Because of the gentle and affectionate nature the dog has become a wonderful family companion.