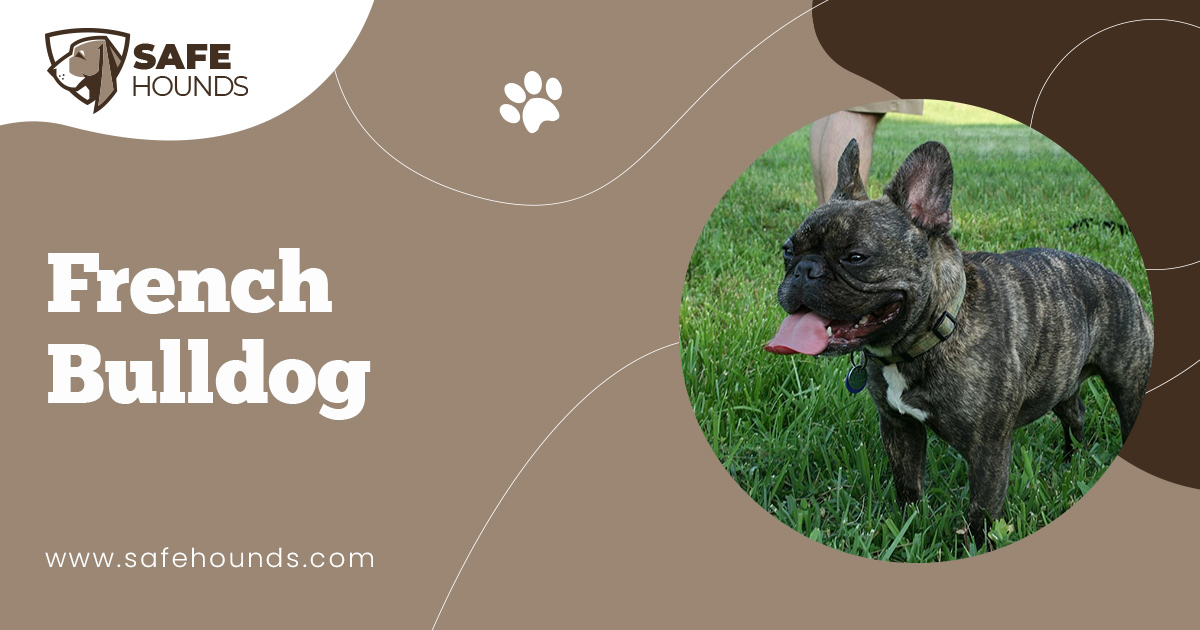 The French bulldog is one of the most loved dogs. Their adorable face and loving look makes people fall in love with them every time they set eyes on one. This breed is a very loving dog to have around. Their watchdog ability is there, but many people have said that their French bulldog does not bark often. Some of them may bark a lot and then others may bark only when they want to.

If you wish to have a trained dog at home, then the French bulldog may be a good one to teach. They are very trainable as long as you are firm and patient with him or her.

The French bulldog loves people of all ages and may also be a good friend for another dog in your home. Just make sure they are careful with other pets. If you are looking for a pet to give all your love and attention to then the French bulldog is one dog that will take it all from you.

There have been many different rumors about where this dog may have come from originally. One thing is for sure is that the French bulldog is here in America and is now being shown in dog shows around the world in the non-sporting group. This is a favorite with many people in the dog shows. They started being accepted by the Westminster Kennel Club in 1896.

When you hear the word Bulldog, you may imagine the fatter and a bit larger Bulldog than the French Bulldog. This breed of Bulldog is smaller. They have ears that are large, erect, and kind of rounded bat-like ears. This is one feature that the French bulldog is most famous for. They have a level and powerful muzzle with a nose that is just like a nose on a Pug. Their tail is short or sometimes corkscrewed and not docked. Sometimes people think that their tails are docked due to the shortness, however, that is not the case.

The coat on the French bulldog comes in the colors of brindle, fawn, white, and combinations of brindle or fawn with white. Their fur coat is very short with fine hairs. Their skin is soft and free which makes this a great dog to love petting. Their eyes are round and the color of their eyes is dark. Their bite is undershot, which makes them very cute. With their skin being loose, this makes them have wrinkles on their face. Mainly on their forehead and around their mouth is where you will find these adorable wrinkles.

The French bulldog is a playful little fellow. They are great with kids, other dogs, cats and any other household pets you may have. Even though they are good with kids, they might be a little too much for toddlers or infants. The French bulldog may take well to someone new entering the house, but will more than likely be cautious at first. They make great watchdogs, but not so much of a guard dog though. The French Bulldog is a people person so much so that he will want attention and love all the time. They love being around their family and being included in all family activities.

The French bulldog does not do well in hot weather. They are very sensitive to extreme heat. Try to keep them cool if you live in warm weather. This breed is great for apartment life and does not need a big yard or extreme exercise. Beware they can be active indoors since they love to play. Make sure not to over heat them while playing indoors as well.

This breed is pretty easy to take care of. Little brushing is needed for this dog since they have such a short coat and fine hair. Brushing every once in awhile to get off dead hair is fine. Make sure to keep their wrinkles cleaned to avoid infection for this breed.

The only exercise this dog will need outside the home is just a short walk every now and then. Try to keep them from the heat, as they tend not to take heat to well. This is because of them being so active indoors that they do not be exercised on a regular schedule. Otherwise, this is a pretty easy breed of dog to take care.

The history of the French bulldog has been in question before. They say that in the 1800s people from England would take their small bulldogs to France for work. While working in France the little bulldogs started to become very popular. The people started breeding these small bulldogs and selling them to people who desired to have one of these loving companions.

As the breed became popular, they also became a favorite of the Parisian Belles De Nuit street walkers. Even today, there may be photos still of these woman posing with their little bulldogs. You can even see a photo of a Russian Royal family that is with their little companion.

As time went on with this breed, Americans that traveled to France also fell in love with the French bulldog. Many American visitors would purchase the adorable dogs and take them home to become part of their families. After Americans starting to buy the French bulldog, they started to become popular in America as well as overseas. It was around this that the French bulldog Club was created for this wonderful breed.

This breed is very related to the English bulldog and all the other bulldogs as well. It is also said that there might be relation to breeds such as the pug for the traits you see in its their face. Just like the pug breed, the French bulldog has the pushed in face with the wrinkles. Proof of this relationship, however, cannot be proven.

As you can see the exact origin of the French Bulldog cannot be proven, it may have been England or France. All we know right now is that this bat eared breed is loved all around the world in different countries and is still a favorite for many. This French bulldog breed was also on board the Titanic Ship. Today, you can find several French Bulldogs in dog shows throughout the world.