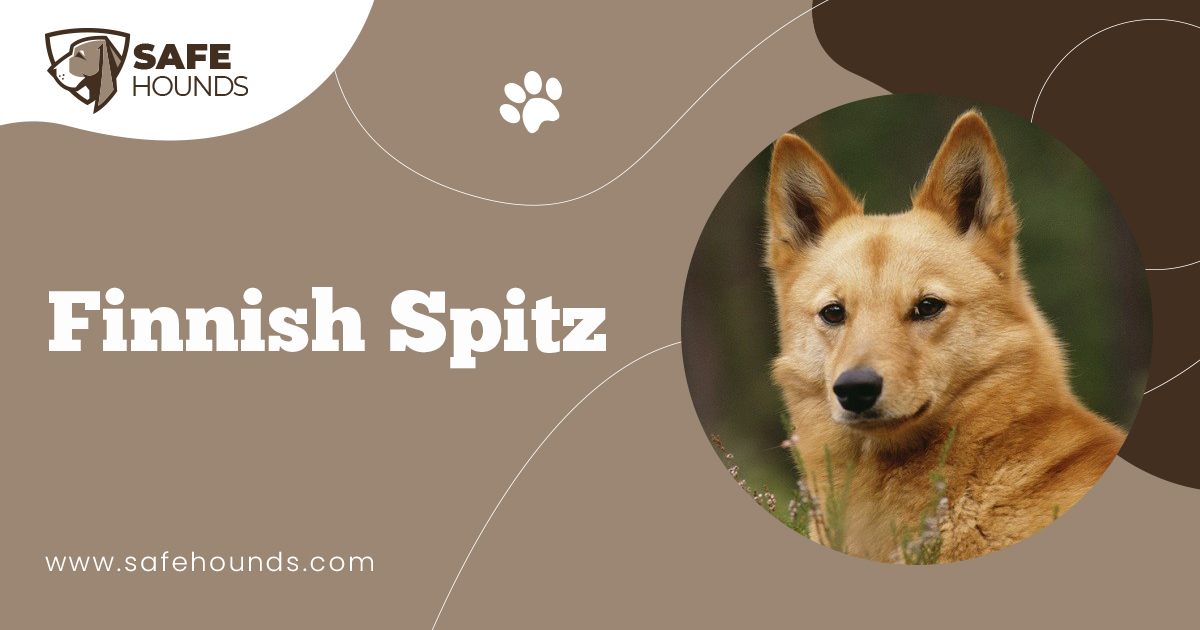 This medium size little beauty is red-gold color and the face of a fox which expresses the most important features of this breed. They have small standing high ears and a tail that curls up around the back. You can tell the difference between male and female by the coat. The male has more hair than the female and he is more muscular looking. She, like any woman, is petite and feminine.

Known for years as the barking hunting dog this insistent barking did bring troublesome times to owners that had to go to the dog in order for him to spot barking. This breed would bark until his owner came only if all he wanted was a bit of companionship.

You must teach him early on that the continued barking is not acceptable. This dog was never meant to be a guard dog, he is more or less an alarm, letting you know someone is around with their keen hearing. There has never been a time where the Finnish Spitz was known to bite anyone even when in danger. They only bark and bark.

Even though they were bred for hunting, they have become a very lovable family dog romping and playing with the children. When he has enough, he will just go lay down until he is ready for more playing. This is why they make a great addition to any family with kids. However, the Finnish Spitz is not happy around screaming, yelling, fighting, or tension.

The heat or cold does not seem to matter to this breed even though they are a Nordic Breed.

With the look of this breed, you may see a fox like look to the dog. The dogs coat is about 2 ½ inches thick. The dogs coat can be a red-brown or a yellowish red. You may see some small white markings in their color of fur as well. When they are born, they are a darker color, which turns to the reddish color as they mature. It has been said, that the puppies look like a small fox cub when they are young. Their fur coat is thick and erect with a thick straight coat underneath.

The nose, lips, and eyes are all dark colored. Their eyes are almond shape and very beautiful. Their ears are pointed and erect. Their feet are rounded to give it a cat like look. Their tail curls up over their back and then leans toward the side. This breed is very broad and has a somewhat square body build. Their body is very muscular. If back dewclaws appear then they should be removed by the owner of the dog. Now the front dewclaws can be removed, but since they normally are small, then do not have to be removed.

The Finnish Spitz is a very loving and loyal friend to have around. They are good with families, children of all ages, and older adults as well. The Finnish Spitz can be a very protective dog and a good watchdog as well. With being a watchdog, they will only announce that someone is at your home and not defend. They are also very good with other pets and may be edgy around strangers. The Finnish Spitz requires patience and understanding, as they do better owners that are willing to take the time. Training works well with the Finnish Spitz as long as training is done in this manner, yelling at the dog or barking orders will in fact, cause your dog to be withdrawn.

This breed has been known as the barking bird dog in Finland. The reason they received this nickname is because they can bark up to 160 times a minute. Therefore, this breed is not a good dog to be kept outside for long periods of time, as they will bark at everything that gets their attention. This breed of dog can do alright in apartment living. Just make sure they go and get some exercise.

The Finnish Spitz has a coat that is self-grooming and stays pretty clean. All the brushing you need for this dog is just a brushing with a comb or brush to get rid of dead hair. They only need a bath when very dirty as they do not have a doggy odor. This breed is a heavy seasonal shedder. Otherwise, this is a very easy breed of dog to take care of.

For exercising, they love to go jogging. If you are a jogger than this is a great jogging friend for you. As long as this dog gets plenty of exercise then you are sure to have them lying by your feet at night.

The Finnish Spitz is a very clean breed and has no oil on its coat so it does not have any odor. This dog if left alone outside will bark at anything that moves and you must stop it from doing it at an early age or he will keep it up. Also left outside he may take off because this dog is a hunter and if he gets wind of something he wants, he will go chasing it and you may lose your dog. So keep a close watch on him.

Some people believe the Finnish Spitz journeyed from Eurasia to Finland from the older spitz breed. They also believed they were watchdogs for the Finno-Ugrain tribes. Later on, it was developed into being a hunting dog. Some even believe it came from Russia. Many breeds of dogs have similar stories, as the true origin cannot be pinpointed, so you will hear several different tales of origin.

As with many other breeds, interbreeding became a problem for the Finnish Spitz as well. In the 1800s, two sportsmen found two pure Finnish Spitz and these two men are the ones who saved this breed.

The breed has had several names over the years such as suomenpystykorva, which translates to Finnish cock-eared dog. Another name was the Finnish barking bird dog. Then in England, it was first known as Finskspets. It was not until 1891 that the name was official changed to Finnish Spitz.

It started being bred in the United States in 1960 and was admitted to the American Kennel Clubs non-sporting group in 1988. This dog is mainly a family pet now, but in Finland, it is still used for hunting. It is said that the dogs bark mesmerizes the birds and every year a king barker of this breed is selected because their bark is so valued. This dog has been the national dog of Finland since 1979, and it is even honored in different songs of that country.