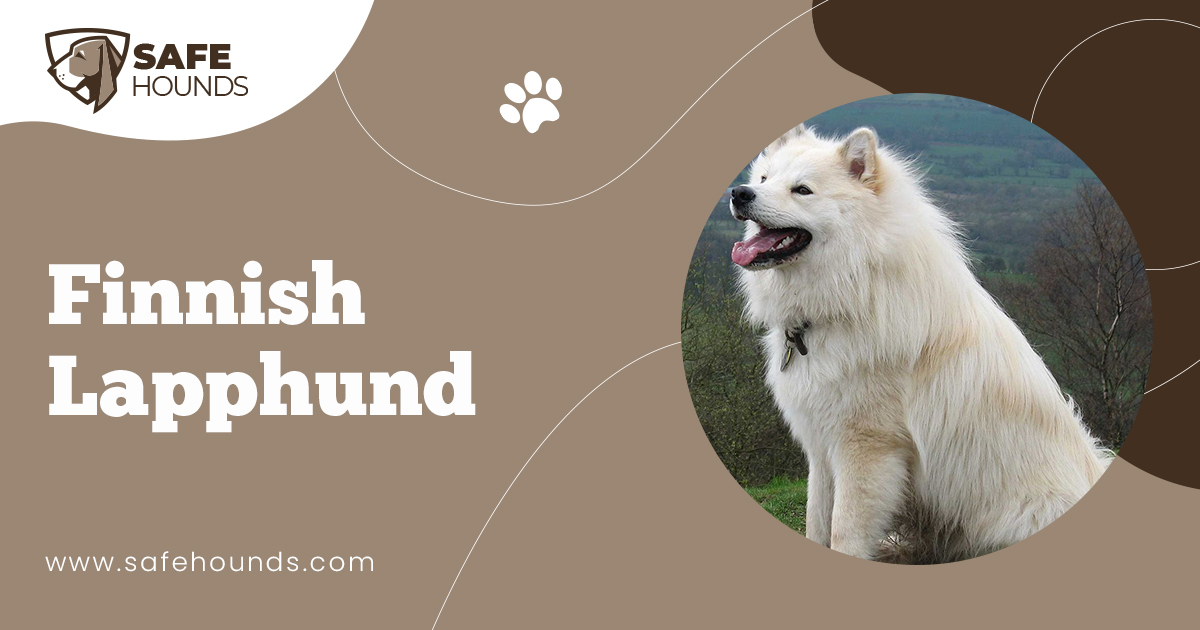 Finland is the home of the Finnish Lapphund. This breed is also known as Lapinkoira and Soumenlapinkoira in its country of origin. This breed is made distinct from other breeds by its unique facial markings. A Finnish Lapphund may appear to be sporting spectacles because of the lighter colored fur that surrounds the eyes. The Keeshond, being the cousins of this breed also has spectacles but the Lappis are bigger and better defined.

The breed is recognized in Great Britain, Europe, America and Australia. This dog grows a profuse double coat. The undercoat is short, dense and downy and the topcoat is longer and rough to the touch. This coat is waterproof and makes the dog resistant to extremely cold weather. Winter in Finland can be very harsh as temperature can drop to below 86 degrees Fahrenheit. During the winter months the Finnish Lapphund is one of the two dog breeds (Lapponian Herder is the other) legally permitted to be kenneled outside.

Finnish Lapphund was originally used in droving reindeer herds. Nowadays, Lappis excel in agility and obedience trials. These dogs became ideal home companions in fact the dog was recognized as the 6th most popular home companion in Finland. Although valued for being an excellent home companion, these dogs still retain their hunting abilities. Their heightened senses make them excellent search and rescue dogs. Because of the strong nose, they pick up scent very quickly.

The Finnish Lapphund is a highly intelligent dog that has a friendly disposition. The dog is known to be very keen to learn and would adapt to training easily. Because of this intelligence the dog may be able to fool the owner that it is still hungry. Lappis are known to have a healthy appetite. They are voracious eaters and tend to get overweight. A Finnish Lapphunds average height is 16 to 20 inches measured at the withers and the average weight should range from 33 to 52 pounds. These are cunning dogs and most owners are enticed to increase the ration. These dogs may snatch food from the table when your back is turned. Measures must be taken so that the dog will not gain access to foodstuffs they are not supposed to eat if you do not want to have a fat and unhealthy dog. Life expectancy of the dog is pegged at 12 to 15 years but some dogs have exceeded 17 years.

A Finnish Lapphund is a small to medium size spitz type of dog. Typical to an arctic dog is the thick water resistant coat that enables the dog to withstand the harsh Arctic winter. A Finnish Lapplund has a copious double coat. The outer coat is long and coarse while the undercoat is dense, short and fluffy. A Finnish Lapphunds coat can be any color as long as a single color predominates. Colors can be red, brown, white, black, sable and wolf sable. The predominant color however is black and tan. The body is profusely covered with long hair. The hair though on the head and on the front of the legs is shorter. Male dogs have manes.

A Finnish Lapphund gives the impression that it is wearing spectacles because of the lighter colored fur that ring the eyes. The dog has a broad skull with a domed forehead and a well defined stop. The muzzle is broad, strong and straight slightly tapering to a black pigmented nose. This breed has oval shaped and dark brown colored eyes that have a friendly and soft expression. The triangular ears are set apart, broad at the base and carried erect.

The dog has a well muscled body, a straight back and a deep chest that almost reached the elbows. The tail that is set on high is medium length and profusely covered with long hair. The tip of the tail forms a J hook and carried over the back or at the side when the dog is moving.

Centuries ago, the breed was most valued for its herding abilities. Nowadays, a Finnish Lapphund is loved for its loyalty and devotion to the family. The dog that was once seen roaming the Lapland and helping the Saami people in herding reindeers can now be found in homes, guarding the family as well as the properties. However, because of their herding nature, the dog would often think of the family as a reindeer herd, one that needs to be protected.

Finnish Lapphunds are known for their intelligence. These dogs would think before they act. This intelligence coupled with the innate characteristic to please make the dog adapt easily to obedience training. This trainability make the dog excel in dog sports. Needless to say, housebreaking a Finnish Lapphund puppy would be easy. However it must be remembered that the dog is a working dog and as such repetitive inane exercises will be scorned by the dog. What the dog would need (and appreciate) is an exercise that would stimulate its mind. Once properly trained Finnish Lapphund, will be a very productive dog. Some have been used to aid and support elderly and disabled owners. It would really be quite amusing to see but these dogs are trained to do simple chores like fetching things and closing doors.

This breed is a barker though the barking trait is not much of a problem as it can be tempered with training. The barking makes the Finnish Lapphund an ideal watchdog. This dog is always alert and would bark at anything unfamiliar to warn the family. The dog is naturally gentle and tolerant with children. They would also tolerate other smaller pets especially if they were socialized properly while still young. Male dogs however, are proven to be dominant over other male dogs.

Finnish Lapphunds are active dogs and basically would need from 60 to 80 minutes exercise daily. This means that the dog is not one for a couch potato owner. The dog is for an owner who has an active outdoor lifestyle as the dog would appreciate to be taken jogging, biking as well as taken on hiking trips. Because the dog is highly energetic an apartment would not be a suitable living arrangement. A home with a modest yard would be most suitable. Since the dog is fully insulated against cold weather by the copious coat, the dog can be allowed (and happy) to stay outdoors even during the winter months.

The owner though has to be vigilant as the dog has the tendency to dig. The dog may be able to escape the fenced area and because of its hunting nature may hunt other peoples pets.

A Finnish Lapphund is easy to care for. The profuse coat would need moderate attention. The coat does not need to be trimmed and a once a week thorough brushing would unsnarl tangles and keep the good condition of the skin. More frequent brushing is needed during the twice a year shedding. Apart from accelerating the shedding process this will also minimize the dog shedding inside the house. Frequent bathing should be avoided so as not to remove the natural oil of the skin. Of course this should not apply if the dog has rolled on something obnoxious smelling.

The Finnish Lapphund, the Sweddish Lapphund and the Lapponian Herder are the three Lapphund breeds that were believed to have descended from the spitz type dog native to the Karelian region of Russia and to the Northern Scandinavian area. Finnish Lapphund is an old breed whose existence dates back to 7000 BC. Paintings and writings depicting an Arctic spitz type of dog were found by archeologists in caves. It was believed that these dogs have come to live with the Sami people.

During those times, it was a big concern for the Sami people to tend to their semi-domesticated reindeer as often times these reindeers would merge with the big herd of wild reindeers. The wild arctic spitz type dogs that would hang around the camps of the Sami people scavenging for scraps of food formed a relationship with the people. Soon enough the dogs were domesticated and the Laplanders found out that the dogs can easily tend and keep the reindeer herd together.

Aside from guarding the reindeer herd, the dogs also guard the properties. The dog became the companions of the Sami as now they have other roles to perform, as sled dogs and hunting dogs. For centuries, the dogs became the constant companions of the nomadic Sami as well as the native people. When Finland and Sweden separated and formed boundaries both countries have chosen the same breed as their herding dogs. Both countries claimed the breed as their own. This is why there is a Finnish Lapphund and a Swedish Lapphund.

In 1960s the breed was reassessed on the basis of their coat. The short coated dog became the Lapponian Herder and that long coated ones became the Finnish Lapphund. The Standard for the breed was revised in 1993. Also during this year the name Lapinkoira was changed to Soumenlapinkoira.