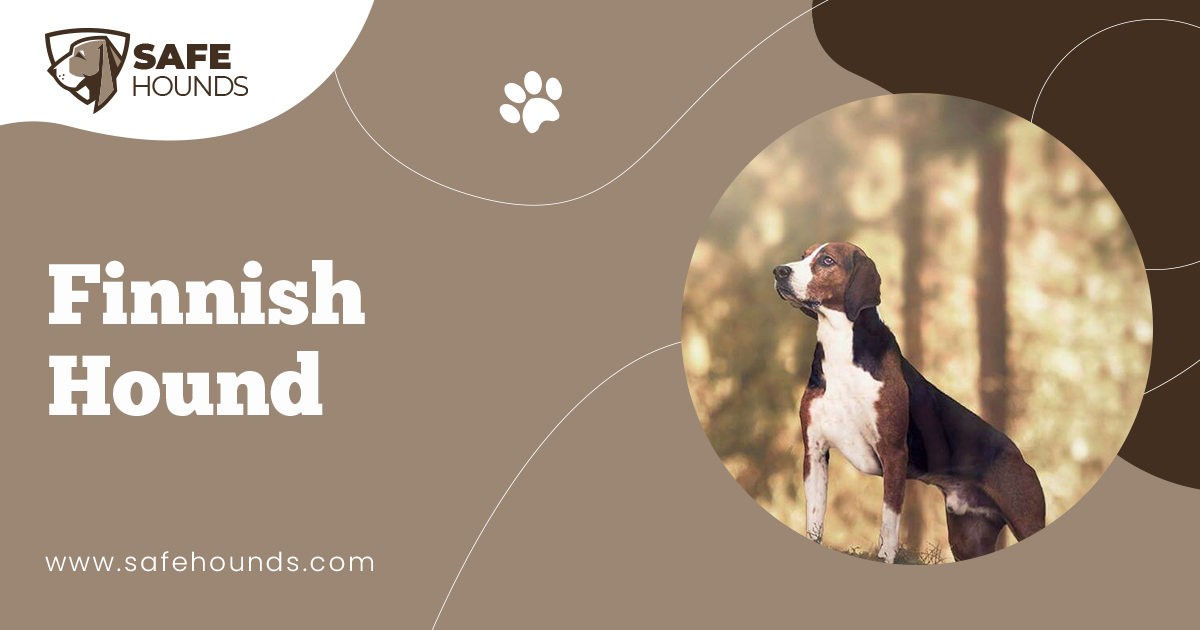 The Finnish Hound is the most popular breed of working dog in Finland and also in Sweden. Unfortunately, the breed is relatively unknown in other countries. Hunting enthusiasts were robbed of the chance to work with this remarkable breed of scent hound. This breed was the result of the breeding program undertaken by Finnish breeders in the later part of the 17th century. The objective of the program is to create a breed of hunting dog that can adapt to the difficult weather condition and the harsh terrain of the country. This breed is a passionate hunter and a relentless tracker. A Finnish Hound is an independent hunter with a rather unique way of hunting. The dog will follow a scent and trail the prey. But unlike other breeds of hounds, this one will never kill and retrieve the quarry. That pleasurable and exciting part of hunting is given to the human hunter. Once a prey is found, the dog will let out a distinctive howl to alert the master while keeping the prey at bay. If the prey managed to escape, the hound will again diligently trail and once again will lead the master to the location of the game.

The excellent scenting ability and the passion to hunt is not the only reason why this breed is highly valued. Although rarely seen in dog shows, the Finnish Hound is a beautiful breed. Standing at 20 to 24 inches and weighed in at 45 to 55 pounds, this breed has a compact and well muscled body. The tan base coat is made more appealing by the black saddle and the white markings. The Finnish Hound has a friendly, affectionate and gentle nature. The gentle nature is what makes this breed lovable and most wanted not only by the hunting community but by other dog lovers as well.

To a hunter, the hunting prowess of the dog is more important that its appearance. The Finnish Hound is a hunting dog highly valued for its excellent scenting ability and for its remarkable working ethics. This breed is rarely seen in dog shows in spite of the fact the tricolored coat, the strongly built though not heavy body as well as the light and effortless buoyant movements gives the dog a noble and elegant appearance. The outstanding appearance is one of the reasons why this breed has gained enormous popularity.

The Finnish Hound is a medium sized breed with a rectangular body. The dog has a double coat. The straight and rather harsh medium length topcoat is close lying. The undercoat is short, dense and has a soft texture. Coat is tricolored. This breed has a beautiful tan coat and black markings that look like a saddle. Small white markings can also be found on the head, on the neck and forechest as well as on the lower parts of the legs. The tip of the tail may have a white marking too. This bred has a domed skull and a slightly convex forehead. The clearly defined stop is emphasized by the eyebrows. The muzzle is equal in length to the skull, slightly tapering to the large black nose that is well developed and has mobile nostrils. Well developed lips are well pigmented. Upper lip curves beautifully. Jaws are strong Complete dentition has a tight scissor bite. Medium sized eyes are slightly oval in shape. Dark brown irises and black pigmented eyelids give the dog a calm expression. Ears that reach half of the muzzle when drawn out hang down close to the head with the back edge pointing outwards.

A Finnish Hound has a medium length muscular clean neck. The slightly longer than tall body has a straight muscular back, a rather short powerful loin and a strong slightly oblique well developed beautifully arched croup. The long chest is deep reaching the level of the elbows. Ribs are well sprung and the underline rise slightly. Low set tail is slightly arched and reaches the hock. Strong based tail tapers to the tip. At rest, the tail hangs close to the hindquarters. When the dog is alert or on the move, the tail is raised but not higher than the level of the topline.

Through out the history of this breed it has been utilized to hunt. This breed is an eager hunter that works independently. A Finnish Hound does not need to be trained to hunt as hunting comes naturally. This is fortunate as a Finnish Hound has a stubborn streak. Training would be rather difficult. The dog will react better to gentle and firm training methods. A Finnish Hound though does not have an aggressive nature. The dog forms a strong bond with the family. A well trained and well socialized Finnish Hound will be a wonderful home companion that will be affectionate and gentle with the children and one that will tolerate other dogs. However, this breed is not for everyone. An owner needs to be calm but firm. He must be the leader of the pack in order to prevent dominance issues. A rather weak owner will find this breed difficult to handle.

This breed is ill suited to an apartment life. Apart from the dogs inclination to bark, it does have extensive exercise requirements. Ideal environment for this breed is one where there is ample space where the dog can run. The space needs to be secured with a fence as well. This is a hunting breed and because of a strong prey drive the dog can be dangerous to other small pets if it is allowed to roam in an open area unrestricted by a leash.

The Finnish Hound is a breed that is not difficult to maintain. Extensive grooming is not necessary to maintain the good condition of the coat. A firm bristled brush used once a week will distribute the natural oils and keep the coat shiny and healthy. For such a short haired dog, the Finnish Hound sheds profusely. During shedding season the dog would need more frequent brushing. Frequent bathing is not necessary. But being a working dog this breed may get very muddy or dirty when it is hunted. Mild soap should be used to bathe the dog. Teeth cleaning must be done at least twice a week and the nails must be trimmed regularly as well.

The Finnish Hound popularly known as Finnish Hound in Finland, its country of origin was created out of a need for a real good hunting dog. Finland has several breeds of native dogs. Eastern and western breeds of dogs that were brought home by returning military personnel were used by Finnish hunters. However, it was realized that Finland has no native hunting breed as most hunting dogs were imported from other countries. The large hunting dogs imported from Russia are too heavy. Also the Swedish German and the Swedish-British crossbreeds are unsuitable for the winter conditions of Finland. Development of a new breed was started in the later part of the 17th century. In 1889, the Finnish Kennel Club was established. One of the objectives of the club is to develop a new breed of hunting dog that will be suitable to the hunting conditions of the country.

A blacksmith named Tammelin has started experimenting with various breeds. As European breeds are common during that time in Finland, the English, Swiss and German Hounds were crossed with the native hounds of Scandinavia. English foxhounds, Harrier and Beagle were crossed with Hamilton Hounds and other Swiss, Polish and Russian hounds and the Finnish Hound was born! This breed is noted for its remarkable scenting ability. The dog is commonly utilized to hunt fox and rabbit although it is known to hunt elk and lynx as well. This hardy and agile dog performs extremely well even in harshest terrain and in the most difficult weather condition.

In 1893, the breed description leans towards a light brown hound with white markings. However, in 1913, a tricolored dog was favored. The 1932 breed standard specified for black mantle, red-brown coat with white markings. The Finnish Hound is a highly valued hunting dog. This is considered as the most popular working breed in its country of origin. The dog is popular in Sweden as well although it is not known in other countries. Considered as the most popular among Nordic breeds, the Finnish Hound has about 5000 registrations per year and 80% of that is from Finland.